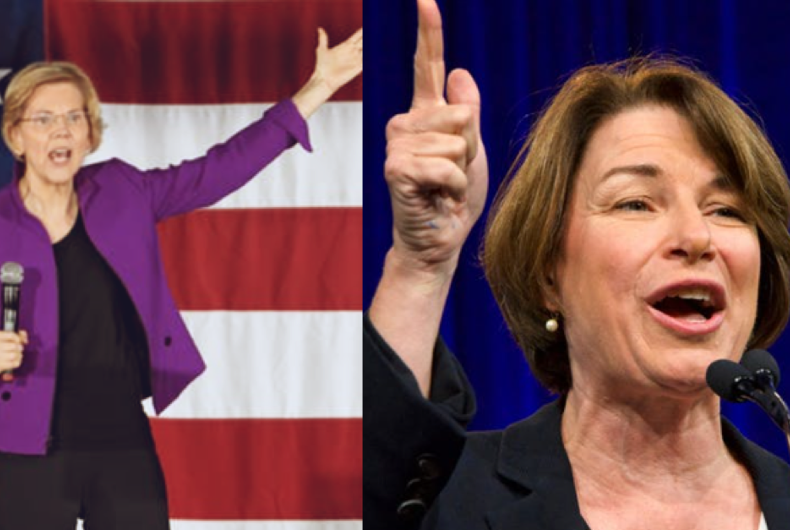 The New York Times‘ editorial board came to a historical conclusion on Sunday, when they announced who they had decided to endorse for the Democratic Presidential primary on their FX series, The Weekly.

Related: The Democratic debate was really about who can beat Trump

“That’s why we’re endorsing the most effective advocates for each approach. They are [Senators] Elizabeth Warren and Amy Klobuchar,” they shared in the bombshell op-ed. “Ms. Klobuchar and Ms. Warren right now are the Democrats best equipped to lead that debate. May the best woman win.”

The Times explains that their decision came from “spend[ing] more than a dozen hours talking to candidates,” and evaluating the ragged political landscape of the present.

The Democratic primary contest is often portrayed as a tussle between moderates and progressives. To some extent that’s true. But when we spent significant time with the leading candidates, the similarity of their platforms on fundamental issues became striking.

In a candidate-by-candidate breakdown that led to their decision, the Times wrote mostly positive reviews of the remaining Democratic candidates. Pete Buttigieg, the out mayor of South Bend, Indiana, was described as having an “all-star résumé,” and that “his showing in the lead-up to the primaries predicts a bright political future.”

“We look forward to him working his way up,” they conclude of Buttigieg.

Their most critical rejection was of Senator Bernie Sanders – not of his politics, but the brand of “how Mr. Sanders approaches politics.” The editorial board writes, “[Sanders] boasts that compromise is anathema to him. Only his prescriptions can be the right ones, even though most are overly rigid, untested and divisive…” They then compare the independent Senator from Vermont to Trump, claiming “we see little advantage to exchanging one over-promising, divisive figure in Washington for another.”

This, they conclude, led them to selecting Warren, who “has emerged as a standard-bearer for the Democratic left.” According to the historical newspaper, “…[the Warren] campaign’s plans, in general, demonstrate a serious approach to policymaking that some of the other candidates lack.”

They point out, however, that the current conservative judiciary and economy might prove to be an obstacle for her agenda, but write that “carrying out a progressive agenda through new laws will also be very hard for any Democratic president.” They also critique her for “placing the blame” of American issues solely on capitalism. Yet, the Times did not make mention of Warren’s past claimed heritage as a Native American, which turned out to be inaccurate – and she has since apologized for.

On the other hand, they applaud Klobuchar as “a standard-bearer for the Democratic center.” The Times applauds the Senator from Minnesota as “the very definition of Midwestern charisma, grit and sticktoitiveness,” billing her as  “a deal maker (a real one) and uniter for the wings of the party — and perhaps the nation” based on her experience and record in the Senate.

They do admit, however, that Klobuchar’s reported treatment of her staff – which included throwing binders at them – gives them ‘pause’. “They raise serious questions about her ability to attract and hire talented people,” the editors admit. Still, “her record shows that she is confident and thoughtful, and she reacts to data,” they opined.

The Times was also fairly critical of former Vice President Joe Biden and ex-New York mayor Michael Bloomberg. Of Biden, they wrote that his agenda “emphasizes returning the country to where things were before the Trump era…but merely restoring the status quo will not get America where it needs to go as a society.” They implore him to ‘pass the torch’ to a new generation of politicians.

Of Bloomberg, the editorial board noted that the billionaire “would be an effective contrast” to Trump. They bemoan, however, that he “has spent at least $217 million to date to circumvent the hard, uncomfortable work of actual campaigning” while also avoiding the typical press scrutiny due to a Presidential candidate. They point out that Bloomberg barred the news organization he owns from covering his campaign, and he turned down the opportunity to sit with the New York Times, unlike the previously mentioned candidates. “What’s worse,” they conclude, “Mr. Bloomberg refuses to allow several women with whom he has nondisclosure settlements to speak freely.”

Speaking on Andrew Yang, the Times simply maintained his lack of experience and denounced that they “hope he decides to get involved in New York politics” instead. Candidates that dropped out of the race – Kamala Harris, Cory Booker, Steve Bullock, and others – are mentioned in passing as “talented”. Tom Steyer is not mentioned at all, although his picture is featured in the online article.

The Times endorsement has been one of the most historically sought-over in the journalism industry, and has leaned toward endorsing Democrats in general elections for almost the entirety of the last 70 years.

Overall, the paper tries to persuade readers that Trump should remain the main issue for Democrats, calling him “a threat to democracy.” They believe that now that he has been impeached, “there is no reason patriotic Americans should not be open to every chance to replace him at the ballot box.” Yet, they maintain that alienating Trump and his supporters is not the key strategy, saying “[his] vision for America’s future is shared by many millions of Americans.”