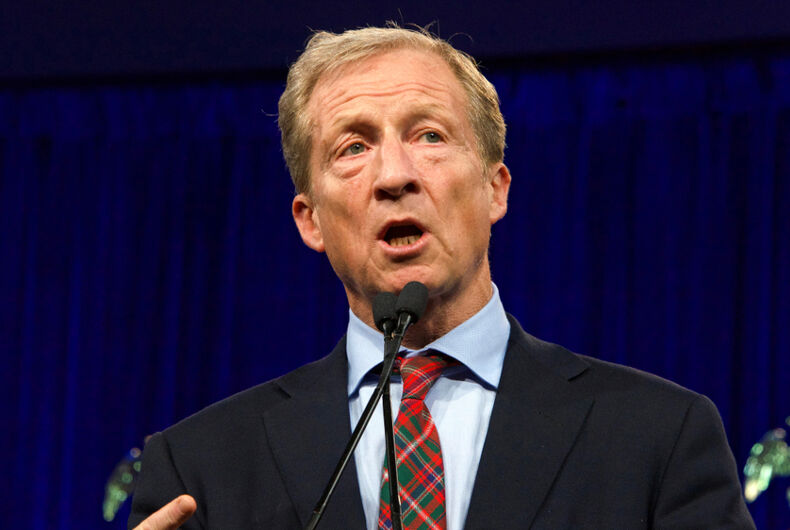 California billionaire and Democratic presidential candidate Tom Steyer sat down for a lengthy 90-minute interview with The New York Times. But when it came time to discuss his previous comments on LGBTQ issues, Steyer had a momentary case of amnesia.

One of the publication’s interviewers, Jeneen Interlandi, asked Steyer about his comments during CNN’s October 10, 2019 “Equality in America” LGBTQ Town Hall. At the time, Steyer said he wanted greater oversight by the government of U.S. Immigration and Customs Enforcement (ICE) and their handling of asylum seekers in detainment.

Related: Exclusive: The black trans woman who spoke out at CNN’s LGBTQ Town Hall tells her side

At least two transgender woman have died while in ICE custody.

At the CNN Town Hall, Steyer said, “What we’ve seen from ICE in terms of inhumanity, this is a perfect example, but it’s not the only example. I think it’s absolutely critical for the United States of America to treat people in a humane and decent fashion.”

But when reminded about making this comment, Steyer asked, “I did?” and “Could you remind me what I said?” Interlandi reminded him, “You said that you would increase oversight of health care access for LGBTQ,” and Steyer responded, “I’m not sure I know what that means.”

“O.K.,” Interlandi responded, “So then I guess you cannot elaborate on that.”

“I’d like to see the language on that,” Steyer said.

Instead, Interlandi restated the question, asking which specific changes Steyer would like for improving the treatment of immigrants and refugee families. Steyer said he’d like the government to increase its role in helping the ACLU, the Jewish Family Foundation, and other non-government organizations to help care for immigrants and asylum seekers.

“I’m much more interested in the United States being a country that observes international law,” Steyer said, “that it does not commit crimes against humanity, that it is actually humane and efficient in their treatment of people coming here seeking asylum.”

During interview, Steyer also covered other numerous topics: his organization Next Gen’s efforts to register young voters, resolving income inequality through a wealth tax, his plan to fight federal inefficiency on climate change by declaring it a national emergency and subsequently allocating resources towards multi-level initiatives, the urgent need for government and educational reform, and how he now opposes investments in union-busting companies, private prisons, and offshore tax havens even though he has personally benefited from both in the past.

Steyer also spoke about decriminalizing immigrant border crossings, coordinating with Afghanis before removing U.S. military troops from the region, the trickiness of getting China’s leaders to commit to fair international trade deals and shifting to green energy, his advocacy of a public healthcare option alongside the current insurance market which, he says, should involve the U.S. government negotiating healthcare prices for consumers.

He also believes that Democratic-led impeachment proceedings against Trump are the right decision, even if he thinks the 2020 Democratic presidential platform shouldn’t “run on that issue.”