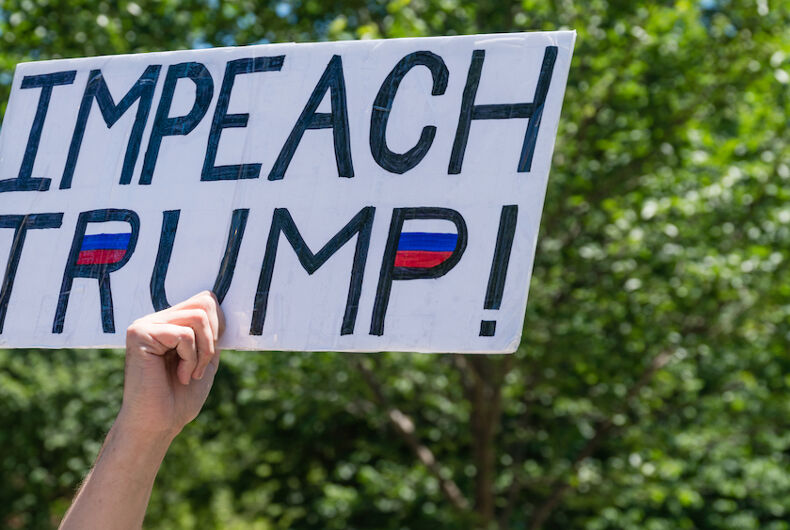 President Trump’s impeachment starts this week, and he appears to have chosen his defense team lawyers on the basis of how well they’ll perform on television. He might just as easily have chosen them (with one exception) on the basis of their anti-LGBTQ record.

Here’s a look at each of the lawyers who will be defending Trump during his Senate trial, and their history attacking LGBTQ people.

Ken Starr. Starr, an evangelical Christian, was the independent counsel who led the impeachment of Bill Clinton in 1998. Starr left no stone unturned until he could finally find something to pin on Clinton. One option he apparently explored was whether Clinton was trying “to place homosexuals in the highest levels of government,” at least based on the question Starr asked Bob Hattoy – one of the few visible out members of the Clinton administration – during the proceedings. For all of President Clinton’s faults, his appointment of gay and lesbian people to White House positions was unprecedented at the time.

After the Clinton impeachment, Barr became Dean of the Pepperdine Law School. While there, he argued before in state court on behalf of Proposition 8, the California ballot initiative that banned marriage equality, which the U.S. Supreme Court eventually overturned.

Barr then went on to head Baylor University, which until 2015, branded “homosexual conduct” as a violation of student code. He was canned from his job in 2016 for refusing to take student complaints about sexual assaults seriously. He later said he was ignorant of the rampant culture of sexual assault on campus. More recently, Barr was on the legal defense team for Jeffrey Epstein, the billionaire accused of sex trafficking underage women.

Robert Ray. Ray succeeded Starr as independent counsel and actually moved to indict Clinton. Like his predecessor, Ray has a significant anti-LGBTQ record. While Ray has a reputation as an aggressive prosecutor, he was also a failed New York City school board candidate in the 1990s. His platform focused on opposing the rainbow curriculum, which promoted tolerance for lesbian and gay students and parents. Starr described such efforts as “assault on the moral authority of parents.”

Ray argued that lesbians and gays had the right to advocate for the curriculum, but said they had ‘‘no right to use first graders as a vehicle for acceptance of a lifestyle that was objectionable to many parents.”

Jay Sekulow. Sekulow has made an actual career out of attackng LGBTQ rights. He heads the American Center for Law & Justice (ACLJ), the group founded by televangelist Pat Robertson to promote the religious right’s legal agenda. Sekulow has praised Vladimir Putin’s anti-gay “crackdown”, said that judges who upheld marriage equality were “flouting the laws of our country,”  and considered Supreme Court ruling striking down sodomy laws an assault on “the traditional family.”

And that’s just a sample of what Sekulow himself has said. The organization he presides over has been at the forefront of trying to prevent LGBTQ progress. Anti-LGBTQ rhetoric has been a go-to fundraising tactic. Meantime, ACLJ has been spreading its anti-LGBTQ message overseas, in hopes of finding fertile ground among the emerging nationalist movement in Europe.

Pam Bondi. Bondi is the former Florida Attorney General turned  who kept appealing court rulings that cleared the way for marriage equality in the state long after it was clear it was a losing battle. A Florida newspaper dubbed her a ” modern-day Anita Bryant” for her relentless crusade. Now, she’s Trump’s impeachment spokeswoman.

The lowest point of Bondi’s tenure came after the Pulse nightclub massacre. Bondi tried to claim that she was a champion for gay people, only to have Anderson Cooper eviscerate her on live television.

Pat Cipollone. As White House counsel, it’s Cipollone’s job to defend the office of the president, not the president as an individual – but such distinctions mean nothing under Trump’s administration. Cipollone is a reliable defender of Trump’s with a rich, anti-LGBTQ past.

Cipollone is a conservative Catholic who sits on the board of the Catholic Information Center, the kind of group that insists on putting quotation marks around gay marriage to question its legitimacy. In 2012, he signed a petition to overturn Maryland’s marriage equality law. Cipollone is also the founder of the Catholic Prayer Breakfast, where right-wing figures like Mike Pence and Mick Mulvaney boast about all Trump has done for conservative Christians. At this year’s event, speakers described pushback on the group’s opposition to LGBTQ rights as “persecution.”

Alan Dershowitz. Harvard professor Dershowitz had a respected reputation as a civil libertarian and defense attorney, a reputation that Dershowitz has been systematically destroying with his vociferous support for Trump. Like Starr, Dershowitz was on Jeffrey Epstein’s legal defense team – but unlike Starr, one of Epstein’s victims has accused Dershowitz of sexual assault, which he vehemently denies.

Dershowitz has always delighted in defending notorious clients, including the likes of O.J. Simpson and televangelist Jim Bakker. Dershowitz succeeded in getting Bakker’s sentence drastically reduced for his key part in The PTL Club scandals. Bakker is now back on television, pitching his particular mix of dubious products and loyalty to Trump to the religious right.

Where Dershowitz differs from the rest of Trump’s team is his past support for LGBTQ rights. He has cited that support as proof that he’s defending a constitutional principle, not the president – which may explain why he seems to be having some second thoughts about signing on to defend Trump. He’s distanced himself from the White House’s strategy and has offered confusing explanations of his role on the defense team.

Meet the lesbian attorney & environmentalist running for Congress in Indiana