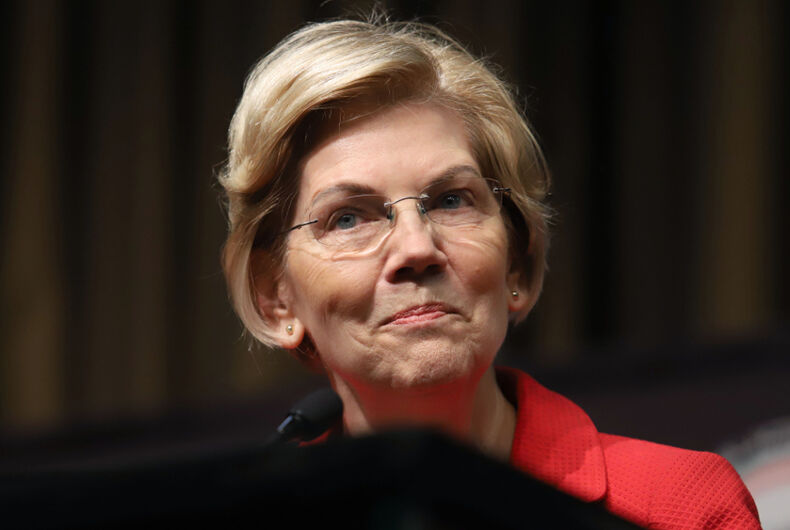 Conservative commenters are reacting with predictable outrage and ignorance after video surfaced of Democratic presidential candidate Elizabeth Warren saying at a Sunday campaign rally in Marshalltown, Iowa: “We have to stop putting trans women who are incarcerated into prisons with men where they are at risk. It is our responsibility.”

Warren’s statement reflects a larger reality: 10 out of 16 police departments with holding facilities examined by the National Center for Transgender Equality have no specific guidelines on whether to place trans individuals with other women, men, or separately.

Related: Elizabeth Warren is the top candidate among LGBTQ people according to new polling

As a result, many trans prisoners are either placed into solitary confinement for 23 hours a day for their own “safety” or placed with the general population where they’re 10 times more likely than straight cisgender prisoners to face sexual assault.

But the conservative right doesn’t think trans women really exist. They see trans women as “biological men identifying as women” for the sole purpose of terrorize women’s spaces and their bodies.  As such, they think that trans women only desire entry into women’s prisons so they can rape cisgender women.

His comment follows a similarly ignorant comment he made in February 2019 in which he said, “I don’t want the next national emergency to be that some Democrat president says we have to build transgender bathrooms in every elementary school in America.”

Trump Jr. and Gaetz weren’t the only conservatives making a bogeyman out of Warren’s comment. One even accused Warren of making up a non-issue because she couldn’t criticize the economy.

How can she care so little about the lives of incarcerated women that she would put them in such danger?

This is rank elitism and it is hateful. https://t.co/1L4Rkspclz

I don’t know about the stats in the US, but in the UK, 48% of trans women prisoners are sex offenders.

I think we have a duty to keep female prisoners safe, and one way of doing that is to keep males, especially sex offenders, out of women’s prisons.

This is unheard of!! All men, may claim to be Trans; just to be put in, with the women! Is she kidding!! How about, co-ed prisons, or building, new prisons, just for them…Huh, Warren! Forget it!! Ridiculous!!

Trans women are identify as men….they want to be men then they should not be with women when incarcerate. Sounds like Elizabeth Warren wants to pick and choose what makes a crime and have a pillow for making the consequences soft.

Good to know Warren has her priorities straight! I have been up nights lately worrying about where trans women are incarcerated.

Don’t worry the Real Women inside the Walls
Will take care of business https://t.co/Nj82OBRUYn

What a moral disaster Warren is. So put trans “women” into prisons where they may put actual women at risk? From the people who brought you: trans “women” in bathrooms with little girls.

The leading Democrats are totally deceived on this stuff, and I will never understand it. https://t.co/nvxNWQObPe

I guess when you can’t talk about a bad economy… https://t.co/eS2KKQ6j8C

Despite conservative claims, Warren is addressing a real issue that affects a vulnerable minority. She also knows that trans women and allies are among her base and this social justice issue matters to them as well.

Girl expelled from Christian school for wearing a rainbow sweater