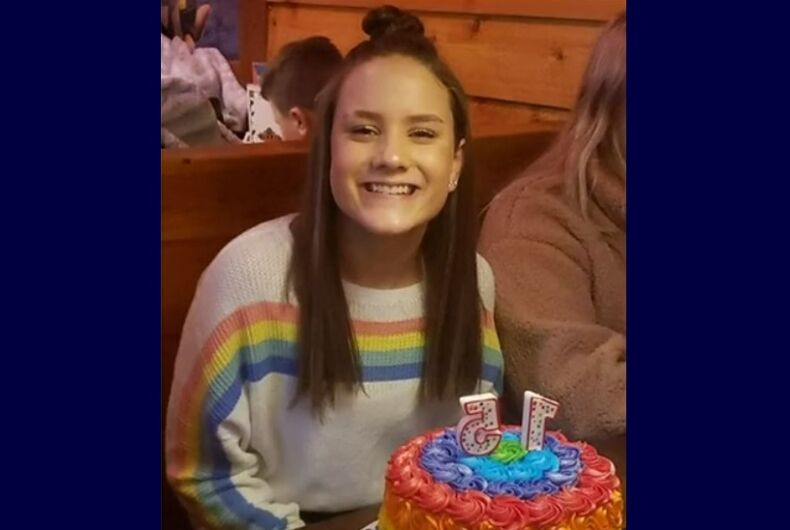 A 15-year-old girl got expelled from her Christian high school because she wore a rainbow sweater.

Kayla Kenney celebrated her birthday with her family at a restaurant, and her mother Kimberly Alford posted a picture of her daughter to Facebook. The student had a sweater with a rainbow on it and a multi-colored cake.

“She was happy, she looked beautiful,” the mother told Wave 3 News. “You know, of course as a mom, I took her picture of her blowing out her candles and I posted that on my Facebook page.”

The picture wasn’t meant to be a statement on LGBTQ equality. It was just a girl in a rainbow sweater – not even the six-striped Pride flag rainbow – with a cake that the bakery’s receipt described as having “assorted” rosettes.

But it was enough for Whitefield Academy, the Christian school Kenney attends, to expel her.

“It was an email expelling Kayla from Whitefield immediately due to a post on social media,” she said. “I feel judged, she feels judged, just very devastating for us.”

The email said that the picture “demonstrates a posture of morality and cultural acceptance contrary to that of Whitefield Academy’s beliefs” and that it’s the latest of Kenney’s “lifestyle violations.”

The school’s policy against LGBTQ people is in its code of conduct – it says that “homosexual orientation” is “in opposition to the Biblical lifestyle the school teaches” – and that it’s allowed to punish students for behavior that occurs outside of school.

Alford filed an appeal, but the most Whitefield Academy was willing to do was record her expulsion as a voluntary withdrawal so that it wouldn’t appear on her permanent record.

“You know we teach our kids what would Jesus do,” Alford said. “What would he do here?”