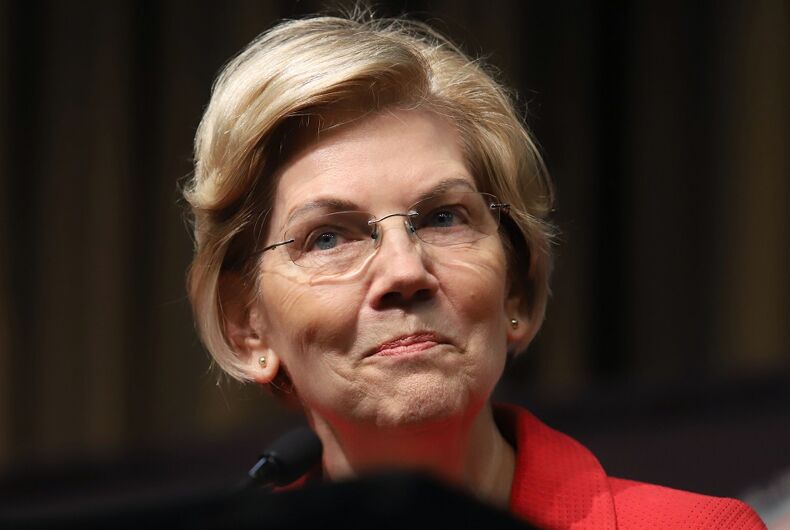 Sen. Elizabeth Warren (D-MA) is LGBTQ Americans’ top candidate, according to a new poll from YouGov and Out magazine.

No other candidates got double-digit support from LGBTQ people in the poll, which was conducted online from November 11 to November 18 and had 816 participants.

This is different from how Democrats are currently ranking the candidates nationally. According to RealClearPolitics, Biden leads with 30%, followed by Warren and Sanders at 19% each, and Buttigieg is in fourth with 8%.

According to YouGov, LGBTQ voters probably support Warren because they lean further to the left than the Democratic Party in general.

The poll also asked LGBTQ people which candidates they thought could beat Donald Trump in the general election. 53% said they believed Warren could and 52% said they believed Biden could. They were followed by Sanders (46%), Buttigieg (29%), and Sen. Kamala Harris (D-CA), at 26%.

Even though LGBTQ people are divided on which candidate to support, the vast majority want Trump out of the White House. 89% said that he should be impeached and removed from office, 93% disapprove or strongly disapprove of how he has been doing his job as president, and only 4% approve of his time in the White House.

Gay Republicans often argue that LGBTQ Democrats only vote for Democrats because they support LGBTQ rights, but that’s not what the survey found. Only 34% of LGBTQ people said LGBTQ equality was one of their top issues going into the 2020 election season, lower than health care (66%), climate change (59%), income inequality (37%), and gun violence (36%).

The YouGov/Out poll is the first of this election season to ask LGBTQ people who they are supporting in the primary.