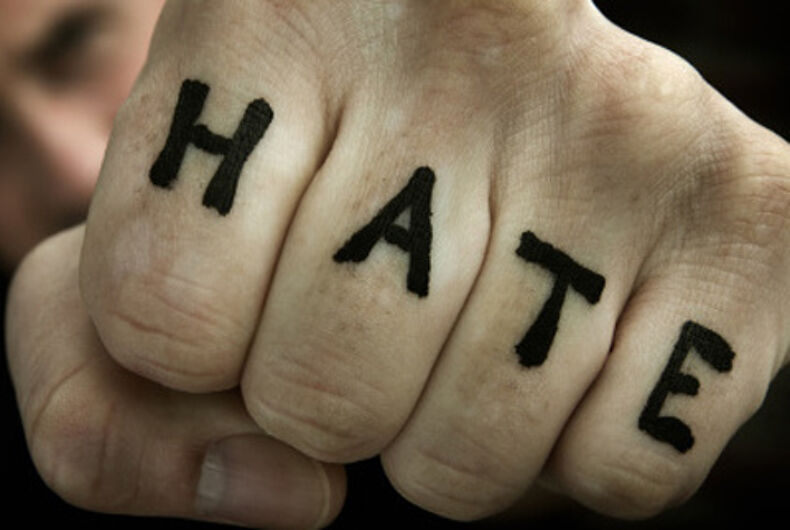 The teen accused of firebombing a Planned Parenthood clinic in Delaware, Samuel Gulick, clearly was an anti-abortion extremist. “When will we start shooting?” Gulick mused in one social media post. “Its about time we kill these genocidal demons.”

Gulick also posted anti-LGBTQ content online as well. “If a woman had a piece of bread for every gender there is, she would have exactly one sandwich,” he wrote at one point.

Another teen, Justin Olsen, was arrested last year for similarly planning to target and attack a Planned Parenthood clinic. Like Gulick, Olsen’s online rants included anti-LGBTQ rhetoric. Olsen also had his sights set on a gay bar. When he was arrested, Olsen had in his possession 25 guns and rifles and about 100,000 rounds of ammo in his possession.

Similarly, Eric Rudolph is known as the Olympic Park bomber (the topic of the recent Clint Eastwood movie), but Rudolph also attacked a lesbian bar with a bomb filled with nails and bombed an abortion clinic.

These cases serve as a good reminder that hatred isn’t specialized. The media may be inclined to think of bigots as operating in specific lanes: there are white supremacists, anti-Semites, anti-abortion extremists.

The distinctions may apply to specific actions, but the fact is the extremists are equal-opportunity haters. White supremacists don’t just hate people of color. They hate LGBTQ people as well. There’s plenty of evidence, starting with Straight Pride rallies that are just white supremacy celebrations.

The same is true with anti-abortion extremists. One of the leaders in the movement is Janet Porter, who scored a huge victory by getting the Ohio legislature to pass perhaps the most restrictive anti-abortion laws in the nation.

Porter, who was a big backer of Roy Moore’s Senate campaign, has also made a career out of attacking LGBTQ rights. She was the architect of the Truth in Love campaign, the 1990s effort to promote conversion therapy. She’s organized protests against Disneyland’s Gay Days and has blamed the biblical Noah’s Flood on gay marriage.

Porter is not actively encouraging physical violence against LGBTQ people (whether her kind of rhetoric contributes to violence, however, is a separate matter), but for many on the religious right, abortion rights and LGBTQ rights are twin evils. Just because Porter is now primarily focused on abortion rights doesn’t make her any less anti-LGBTQ.

For extremists of all stripes, hatred of abortion and LGBTQ people are of a piece with the same philosophy – both are signs of disruption of traditional sexual roles. If you believe that men (white Christian men, especially) are the lynchpin of society, letting women control their own bodies or having people who don’t conform with an old-fashioned heterosexual model is a real threat.

So the next time you hear about an assault on a Planned Parenthood clinic or read about another white supremacist rally, just keep in mind: those attacks are targeting you, too.