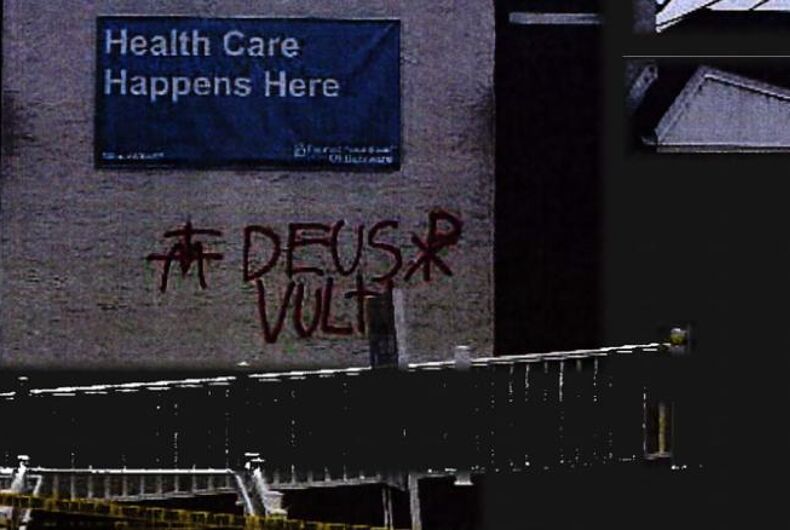 Samuel James Gulick, 18, has been arrested and charged with throwing a lit incendiary device into a Planned Parenthood facility and spraypainting “God wills it” on the side of the building in Latin: “Deus Vult.” The phrase is commonly used by white nationalist and neo-Nazi groups.

Police say they were able to identify the car Gulick drove away in and used his social media posts to confirm his identity. The teenage suspect repeatedly used the phrase along with anti-abortion videos and anti-LGBTQ content.

Gulick allegedly threw a lit firebomb into the building and video surveillance cameras show him spraypainting the phrase on the building with red paint. The incendiary device exploded, but fizzled out after a minute.

“I view this as an act of domestic terrorism, and an attack on health and reproductive rights and yet another way to limit women’s freedom to have body autonomy,” Ruth Lytle-Barnaby, CEO and president of Planned Parenthood of Delaware, told CNN. “I think everybody should be able to access healthcare without fear, shame or stigma, and this kind of attack is a way to thwart that.”

One post was a link to a news story about a young transgender girl. “Hans get the flamethrower,” he wrote in a nod to neo-Nazi ideology.

Another shows a photo of a man with a rainbow flag and a “no” symbol imposed over his face. Gulick posted the white flag, rainbow, and “no” symbol emojis with the photo.

If convicted of the most serious offense – maliciously damaging the Planned Parenthood facility – Gulick faces a statutory minimum of five years and a maximum of 20 years in prison and a $250,000 fine, according to the Department of Justice.

Washington DC may change their legal code to be gender neutral