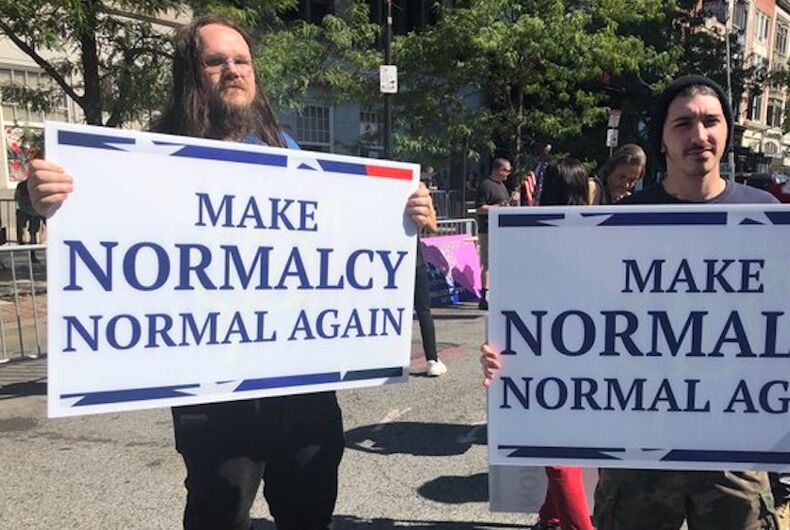 Today, organizers with ties to white supremacy held a so-called Straight Pride parade in Boston. Only about 100 to 200 attendees are participating, including alt-right troll Milo Yiannopoulos — they are vastly outnumbered by far-more-stylish counter-protestors. We have tweets on it below.

The event included a march following the same route as Boston’s Pride parade. Counter-protests took place at City Hall Plaza with another confronting the parade at Copley Square, where the march ended

It has become increasingly clear that the Straight Pride Parade is organized by a group of white supremacists and is an attempt to bait the Boston LGBTQ community, as well as racial and ethnic minority communities in Boston.  It’s a trolling event, designed to get a rise out of vulnerable communities.

Boston Pride is not interested in responding to their bait. Our strength comes from directing our attention and energy to helping one another meet the challenges of intersecting oppressions. Boston Pride will continue to focus on supporting and empowering members of the LGBTQ community. We will continue to focus on the needs of people of color, trans individuals, and all those who have experienced racism, xenophobia, and sexism.

We remain thankful for the estimated one million people, including our straight allies, who joined us at the 2019 Boston Pride parade and festival on June 8th and we’re looking forward to planning our 50th anniversary celebrations for June 2020.

Here are numerous tweets from people covering the event on Twitter:

For non local folks, here is the route of the straight pride parade. Boylston and Tremont are major thoroughfares through sections of the city popular with tourists and the city just shut them down so fascists could march on a major holiday weekend in which everyone moves pic.twitter.com/K7XWl28f44

The memos are out across Boston: straight pride= white supremacy. pic.twitter.com/r3G3E2E4XL

“Make normalcy normal again” says these signs that just showed up at the #StraightPride parade. pic.twitter.com/dxb5dx1QqC

Here's a guy with green makeup in a kekistan shirt holding a pillow with some weird anime version of sargon of akkad at the straight pride parade. As a straight guy I'm really glad this guy is out there fighting for my rights. pic.twitter.com/oS4fpQaJud

A lot of businesses along the #StraightPride route have rainbow flags out, or in the case of this building, signs saying "Go home alt-right scum." pic.twitter.com/EfWhrrVL29

Boston Area Brigade of Activist Musicians protested the parade near city hall. “Calling this march straight pride is a thinly-veiled excuse for white supremacy and hatred,” said trumpeter Matt Morin. “It gave me chills to see that much anti-immigrant sentiment and hatred” pic.twitter.com/VQwQEireGj

Martin Martie says the reason he showed up today is because his gym membership was revoked and the police refused to arrest two men he claimed to have caught having sex at his gym. pic.twitter.com/PTKex8Kc8t

David here at the Boston Straight Pride Parade has been going on for the last 10 minutes ranting about how the Jews faked the holocaust, rule the world and created the LGBT movement to destroy America pic.twitter.com/awkkds7AAd

Hundreds of #StraightPride counterprotesters are on the march ahead of the white supremacists. pic.twitter.com/dmA4QsQ0fD

One of the Boston Straight Pride Parade floats is a car with a piece of paper reading, Blue Lives Matter taped to it. pic.twitter.com/oZsaCCi8Ap

The "Straight Pride" parade is happening in Boston now pic.twitter.com/Nn06T1HxF6

At the LGBTQ counter protest, a group called Solidarity Against Hate Boston is distributing these flyers to make sure everybody knows who exactly is marching in Straight Pride. pic.twitter.com/yTqqhhqRTN

Boston Straight Pride about to begin with less then 20 people in attendance. At least 3 teens who are marching mention being opposed to the parade and are coming as a joke. pic.twitter.com/P05ZVL8c7u

The organizers of the Straight Pride Parade had a press conference.

One of the questions asked:

“What do you say to taxpayers who want to know why you’re wasting this city’s resources because you three guys can’t get laid?”

At Copley Square now where more than 100 but under 200 Straight Pride participants are getting ready to march #wbz pic.twitter.com/Kb1nmQfzZA

As he walks in a counterprotester in a crown and tutu yells, “I’m here from from the bill collection agency you owe us a lot of money.” pic.twitter.com/mUjUwmhLV4

Milo Yiannopoulos pumps up the crowd before the Straight Pride Parade in Boston starts. pic.twitter.com/keEFUZyO1q

A scrum of reporters and protesters gathered around Milo Yiannopoulos at Boston’s straight pride parade pic.twitter.com/QmM0b6oOpx

Here it is — Boston’s Straight Pride Parade. It’s kicked off with a Trump float with Lee Greenwood’s “God Bless the USA” playing. pic.twitter.com/idBbMVI7Kv

The straight pride parade is literally a trump rally and it’s the least surprising thing ever. pic.twitter.com/noKYJ0E20Q

The float in the “Straight Pride Parade” features “2020 Trump” and “Build The Wall” signs #WCVB pic.twitter.com/fnVfZ3EOnd

Milo was too toxic for CPAC #conservatives on account of his advocacy for man-boy sex relationships. I don't get why white nationalists wanted to honor him today. The sidewalk seems pretty empty. #StraightPride pic.twitter.com/GLN1GKJHaC

The #StraightPrideParade now on its way to City Hall Plaza. #Boston25 pic.twitter.com/44RayYZVRU

I think there are maybe, being generous, 100 people at the straight pride rally. This is just one block of the counter-protest. pic.twitter.com/BFTDYjEg3S

This is what the straight pride rally looks like. There’s probably ten cops here for every fashy. pic.twitter.com/mT58V6V0Rw

The event was arranged by Super Happy Fun America (SHFA) to celebrate “the diverse history, culture, and contributions of the straight community,” but one of the group’s organizers Mark Sahady runs the Boston chapter of a small far-right group called Resist Marxism which traffics in anti-Semitism and white supremacism.

SHFA’s other organizers have ties to white supremacist and alt-right organizations. As such, the Straight Pride movement is inextricably linked to the White Pride movement.

SHFA’s Straight Pride website falsely claimed to have corporate sponsorships from Netflix and TripAdvisor, and both companies threatened legal action against them for their lies. Netflix wrote SHFA, “Our legal department is here, it’s queer, and it’s telling you to steer clear,” and TripAdvisors’ cease-and-desist letter made numerous references to gay anthems.

In response to the march, MassEquality, a Boston-based group supporting LGBTQ rights in Massachusetts, released the following statement denouncing the march and its dishonest message:

“MassEquality works to ensure that everyone in the Commonwealth can thrive without discrimination and oppression based on sexual orientation, gender identity, or gender expression. That language is inclusive. The non-discrimination and hate crimes laws that LGBTQ people fought long and hard for protect straight people too. If a straight person feels targeted or excluded based on their sexual orientation or gender identity, they now have avenues to pursue justice. Straight rights are indeed human rights – and they’re already protected.

We absolutely reject the idea – prominently featured on the Parade organizers’ website — that straight people are oppressed. Straight people’s rights are not diminished when society makes room for LGBTQ people. There is space at the table for all of us. MassEquality supports a vision where we live together in peace.

That said, MassEquality does support the right of all Americans to lawfully assemble, whether that be in peaceful protest or in celebration. We also support the right of counter demonstrators to gather to peacefully express concern about the motives or message of those assembled. Unfortunately we live in a time where we’re witnessing the rise of forces that seek to stamp out diversity in this country. It serves us all to be vigilant.”

A hospital misgendered her suicidal trans son. 5 weeks later he killed himself