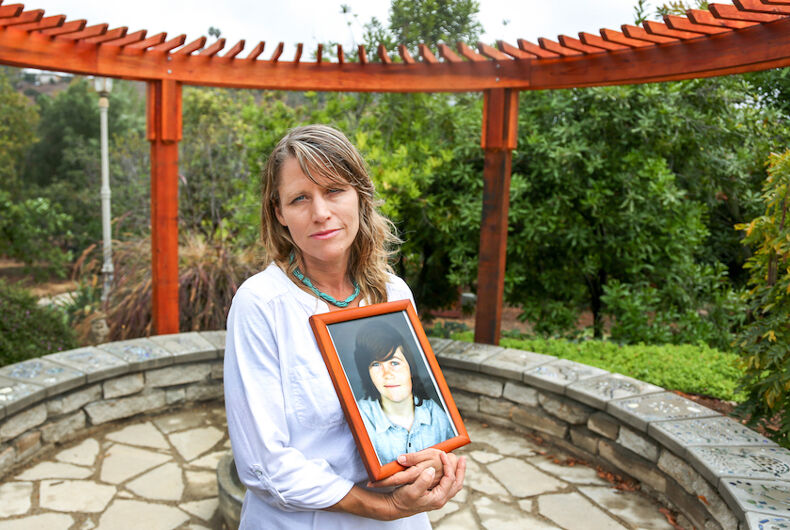 Katharine Prescott, holds a photo of her late son Kyler Prescott, in the memorial garden they created in his memory at thir home in Vista, California September 21, 2016.Photo: Transgender Law Center

Though Katherine informed the RCHSD staff that her son should be addressed according to his male gender identity, hospital staff repeatedly misgendered him. One even allegedly told Kyler, “Honey, I would call you a ‘he,’ but you’re such a pretty girl.”

The misgendering seemed to make Kyler’s anxiety even worse. After 24 hours, the hospital’s staff psychiatrist said that Kyler should be discharged even though patients under suicide watch usually stay for 72 hours.

Katherine didn’t blame the hospital for her son’s death, but she sued the hospital for violating federal and state laws that protecting patients against discrimination. She said she wanted to ensure that the hospital wouldn’t treat any future trans kids similarly.

RCHSD recently settled with her out of court for an undisclosed amount. The National Center for Lesbian Rights (NCLR) along with co-counsel Transgender Law Center (TLC) and Foley Lardner LLP helped Katherine reach her settlement.

The incident highlights the importance of having staff trained in handling transgender patients, especially as transphobic harassment increase the likelihood of mental illness and physical ailments for trans people.

Furthermore, the incident illustrates the needless harm that can be inflicted on trans and other queer patients if more care centers follow the Trump administration’s permission to let healthcare workers discriminate against LGBTQ patients on the basis of “religious freedom.”

In a statement, Lynly Egyes, Director of Litigation at the Transgender Law Center said:

“Any child or family in crisis should be able to seek out help without fearing discrimination from the very medical professionals who are supposed to care for them. It is harmful, dangerous, and wrong for hospitals to attack a transgender young person’s identity and deny them the freedom to be their authentic self.”

Katharine said, “Transgender children deserve love, respect, and support. I am relieved to have this case behind me as I continue to be a fierce advocate for transgender kids.”