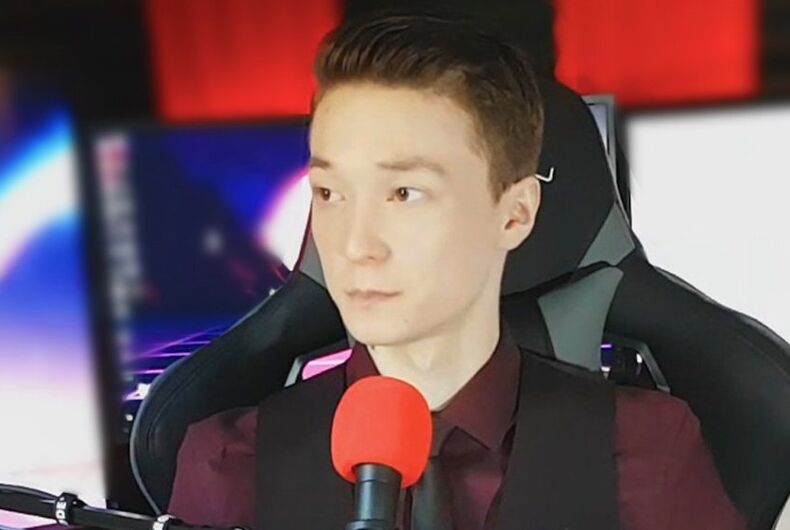 Transphobic comments made over a year ago by TheRealKenzo, a popular YouTube gamer with over 447,000 subscribers, have caused him to lose his sponsorship with SoaR, a North American gaming company. TheRealKenzo has since apologized and spoken with EeveeA, the trans woman who he specifically insulted in his comments.

TheRealKenzo made his transphobic remarks on Discord, a chat app popular amongst gamers, while commenting on a tournament for the game Overwatch, a fast-paced first-person shooter where opposing teams of superheroic warriors battle in futuristic settings.

In the Discord chat logs, TheRealKenzo repeatedly misgenders EeveeA, saying that “he” can’t take “female jokes.” In a May 18, 2018 comment, TheRealKenzo asks, “Am I transgender if I wear a woman’s t-shirt?”

TheRealKenzo’s comments go beyond simple ignorance into active hostility as he seemingly begrudges EeveeA and other gay and trans Overwatch players for having achieved success and fame. At one point, he even encourages other players to make disparaging comments about trans gamers in another Discord chat thread.

His comments are all the more odious considering that they mirror attitudes espoused by the right-wing, misogynist gamers behind the so-called GamerGate movement which began by targeting a now queer-identified video game developer named Zoë Quinn. Quinn remains targeted by GamerGate harassment to this day.

After the chats resurfaced, SoaR announced that it had ended its sponsorship of TheRealKenzo.

Due to recent events, we have decided to release @TheFakeKenzo from SoaR.

On his Twitter account, TheRealKenzo said on Thursday, “About a year ago I acted and thought in ways that’s not okay and I regret being like that. I talked to EeveeA and I have a wider knowledge of what I did wrong. I can’t take back what I said, but I can change of who I am today and improve. And I hope people will give me time.”

So Kenzo and I just called for about 6 hours, a lot was covered and I have a pretty good idea of just about all of it.

He has directly apologised to me, he understands what he needs to work on and we both understand change like this doesn’t happen overnight.

He has a ways to go, for sure. Other things also need addressed, not just what was addressed here, but I do believe not only his tweet is genuine (keeping in mind English is not his first language)

He acknowledges what he thought and said was not okay, and that he directly regrets that. He talked with me that long about these topics and he does have a much better perspective on what he was wrong about, he acknowledges that he can’t just make the things he said go away, but that he wants to improve regardless.

Like, I don’t know. I feel like people are upset because he didn’t use the word ‘sorry’ when he did everything else and more, all while being genuine. That’s a lot more than just about everyone who has been called out can say, in my opinion.”

TheRealKenzo says his conversation with EeveeA occurred about a month ago, before SoaR dropped him. He added, “And I’m grateful for Eeveea being mature and calm about this.”

A hospital misgendered her suicidal trans son. 5 weeks later he killed himself