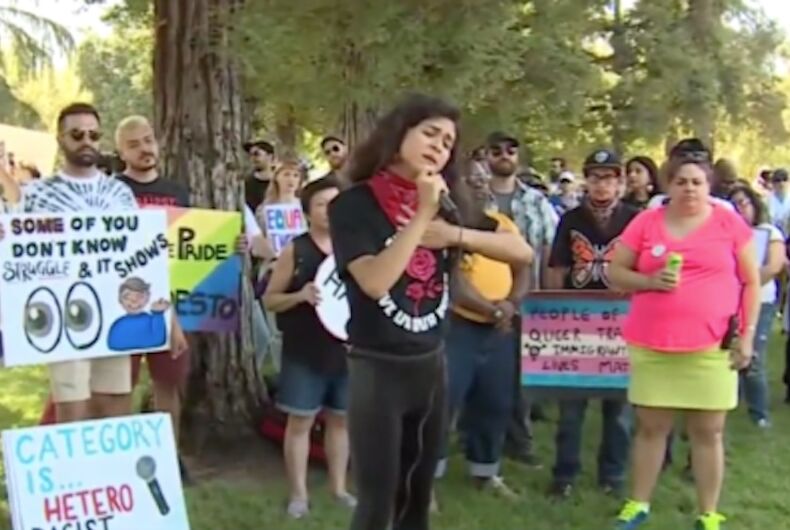 After failing to secure a city permit because of its racist views, the Straight Pride event in Modesto, California held its hateful gathering on a sidewalk outside of a closed Planned Parenthood. Estimates say that the Straight Pride attendees numbered just over a dozen while around 200 counter-protestors demonstrated against them.

According to the Los Angeles Blade, the event began with a brief, private morning rally at the nearby Durrer Barn — its owners said they had no idea it had been reserved for a hate rally and they cut the event shortly after learning this. Afterwards, the Straight Pride event began in public around 1 p.m. and was dispersed a little after 3 p.m.. Police separated the bigots and counter-protestors and no major fights were reported.

Straight Pride organizer Don Grundmann — a man who admitted that his group is racist — told a FOX 40 News reporter,  “Masculinity it’s okay to be a man. femininity, it’s okay to be a woman. Masculinity, femininity, the natural family of man, woman children, babies, born and unborn western civilization, Caucasians and all people, all of those are basic foundations that are under attack.”

Max Reed, a member of the Modesto Non-Violent Collective which helped organize the counter-protest, told reporters, “We are rejecting this presence of hate, that we are rejecting the values that this Straight Pride Coalition represents like white nationalism and homophobia. This community is standing together to reject this group and what they represent.”

Here is video of the Straight Pride event in Modesto, California and its counter-protestors:

Its organizers proudly stated on their website that there is an “inherent superiority” to whiteness, heterosexuality, Christianity, and Western culture, all of which are undermined by the “inherent malevolency/evil of the Homosexual/Sodomy Movement.”

We need to recognize the major upside to Trump’s presidency