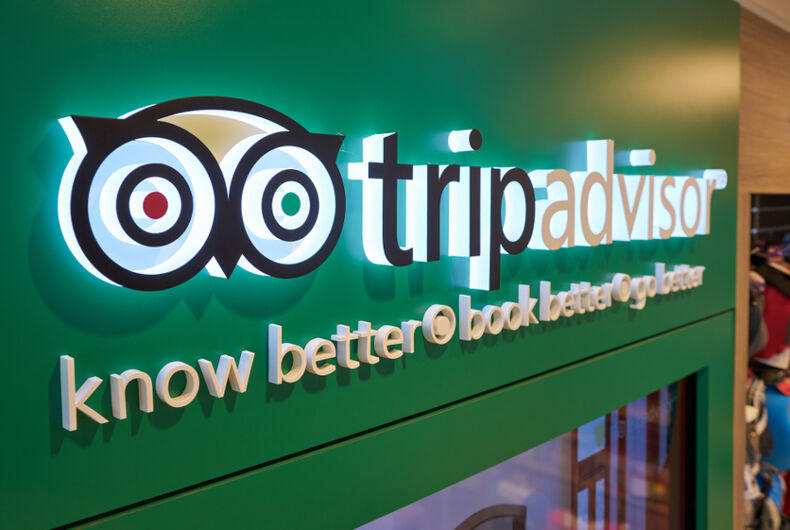 Organizers of Boston’s upcoming “Straight Pride” parade have been hit with another cease-and-desist letter from a corporation upset about the parade website displaying its logo and claiming to be in negotiations with it for a sponsorship. This time, the corporation is the travel website TripAdvisor, and the company’s letter hilariously includes the titles of numerous songs popular with the gay community.

Here are all the sentences containing the titles of gay anthems. See if you can spot them all:

TripAdvisor’s trademark are protected in many countries around the world and Over the Rainbow… We have become a well-known brand for our reviews of hotels, restaurants, experiences and even the occasional YMCA, but we weren’t Born This Way — we obtained that recognition through significant advertising and promotion since as early as 2000….

You Need to Calm Down — you are not sponsored by, associated or affiliated with TripAdvisor in anyway… These inaccurate statements, which I trust to no show your True Colors… impinge upon our Freedom! To decide with what organizations we want to associate our bran. Have a Little Respect and remove those statements. TripAdvisor and I Will Survive without being associated with your event.

There is nothing Vogue or acceptable about making false claims about others merely to support your own cause. If I Could Turn Back Time, I would tell you not to use our name in the first place… In other words, Black Me Out with an “X” on the above webpage. You Make Me Feel (Might Real) disappointment that you thought this might be an acceptable way to do business.”

Earlier this week, Netflix sent a similar cease-and-desist letter to Super Happy Fun America (SHFA), the parade’s organizers, telling it, “Our legal department is here, it’s queer, and it’s telling you to steer clear [of using our logo].” SHFA responded by calling the company “heterophobic.”

Related: The ‘straight pride parade’ organizers fell victim to ‘terrorism’… in the form of glitter

The straight pride parade organizers have ties to white supremacy. Lyft has also sent them a cease-and-desist letter.