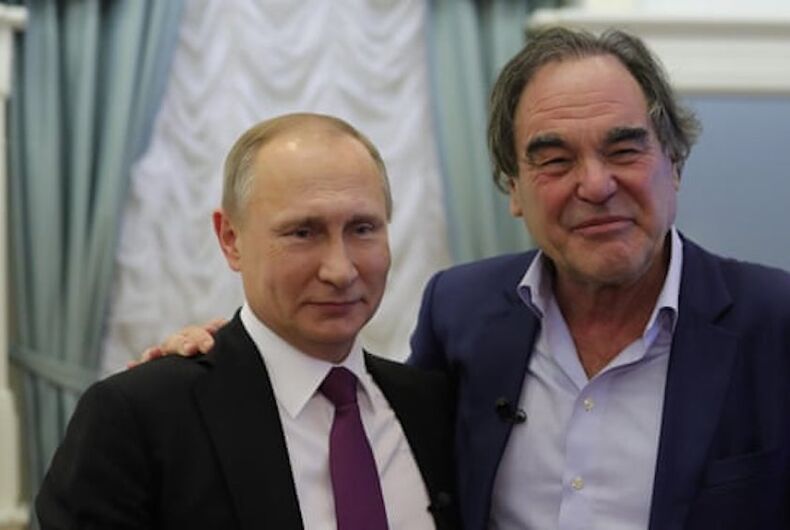 In an interview transcript released by the Kremlin on Friday, Stone and Putin had the following exchange:

Oliver Stone: As you know, I’ve been very rebel all my life. Still am. And I have to tell you, I’m shocked by some of the behaviors and the thinking of the new generation. It takes so much for granted. And so much of the argument, so much of the thinking, so much of the newspaper, television commentaries about gender, people identify themselves, and social media, this and that, I’m male, I’m female, I’m transgender, I’m cisgender. It goes on forever, and there is a big fight about who is who. It seems like we miss the bigger point.

Vladimir Putin: They live too well. They have nothing to think about.

Oliver Stone: Yeah, but it’s not a healthy culture.

In the interview, Stone also asked whether Putin would be his 22-year-old daughter’s godfather. Putin asked if she was willing to convert to Orthodox Christianity and noncommitally said, “You have to ask her [to consent to conversion.]”

In 2013, Russia passed its infamous federal law banning “propaganda of nontraditional sexual relationships” which resulted in a crackdown on LGBTQ activism online and off. In a June 2019 interview with The Financial Times, Russian President Vladimir Putin said his government “[has] no problem with LGBT persons,” but added, “This must not be allowed to overshadow the culture, traditions and traditional family values of millions of people making up the core population.”

Under Putin’s rule, the semi-autonomous Russian republic of Chechnya has conducted an ongoing campaign of arresting, torturing and murdering queer people for the last two years.

While Stone is no fan of Donald Trump and has supported trans Wikileaker Chelsea Manning, he’s genrally supportive of Putin.

In a June 2017 interview with The Nation, Stone promoted The Putin Interviews, his 2017 documentary of his recorded discussions with Putin. In the interview, Stone accused the the CIA, FBI and NSA of fabricating evidence to suggest that Russia tried to influence the 2016 presidential election.

The European Court of Human Rights has repeatedly handed down rulings against Russia’s anti-gay “propaganda” law as recently as last week, but it lacks the power to force Russia to repeal its law.