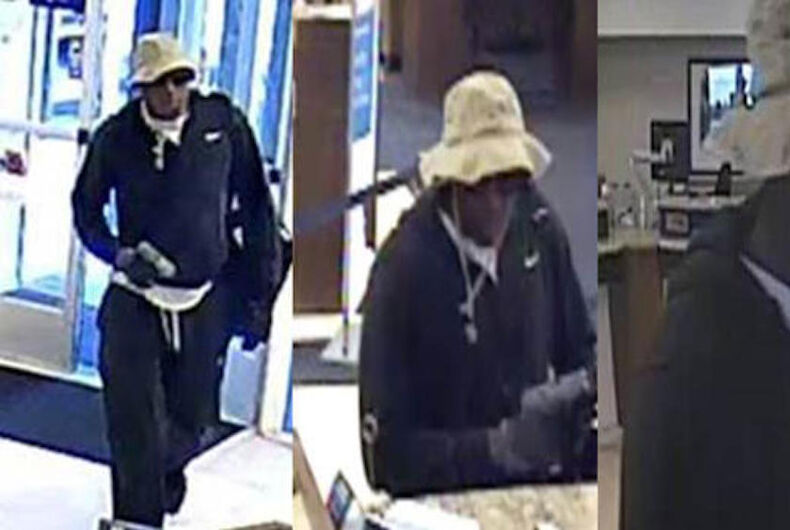 Two days before San Diego’s July 12 – 14 Pride weekend, an anonymous man called the event organizers to tell them, “I think I’m going to have to kill all the gays and the children. I hate the f*ggots.”

He hung up and reportedly called back minutes later to say, “F*ck Donald Trump. I hate Hillary. I hate f*gs. I’m going to shoot up the Pride event.”

San Diego police identified the caller as a 31-year-old man named Andre Lafayette Holmes. Police later pulled him over at a traffic light, found that he had a cell phone matching the number used to make the calls.

According to Newsweek, “When SDPD investigators searched his vehicle and home, they found evidence of from the three robberies, including a large bag of cash, a semi-automatic pistol, [a rubber “old man mask”] and clothing that matches what the robber was wearing in surveillance videos.”

The three robberies occurred in November 2016 and June 2018. During the November 2016 robbery, he allegedly handed a U.S. Bank teller a note that said, “We have guns! I will personally shoot anyone you alert! Don’t make me jump over the counter and kill innocent people. Big bills only and I’ll calmly leave. Money now!!!!”

On the back of the note, it read, “I’m sorry, good man on hard times. Sincerely, Bank Robber.”

Related: L.A. Pride is planning to prepare for a terrorist attack

When asked by the local NBC affiliate about his allegedly homophobic phone threats, Holmes’ mother said, “No, no, no! That was some response not to be taken seriously and I don’t know if that’s him.”

Holmes’s grandmother said she was surprised to hear that he said he hated Donald Trump. “That’s amazing to me,” she said, “because I know he likes Donald Trump.”

Here’s a map of where Holmes allegedly committed his bank robberies:

Can a gay millenial of color beat a homophobic minister for a NY Congressional seat?