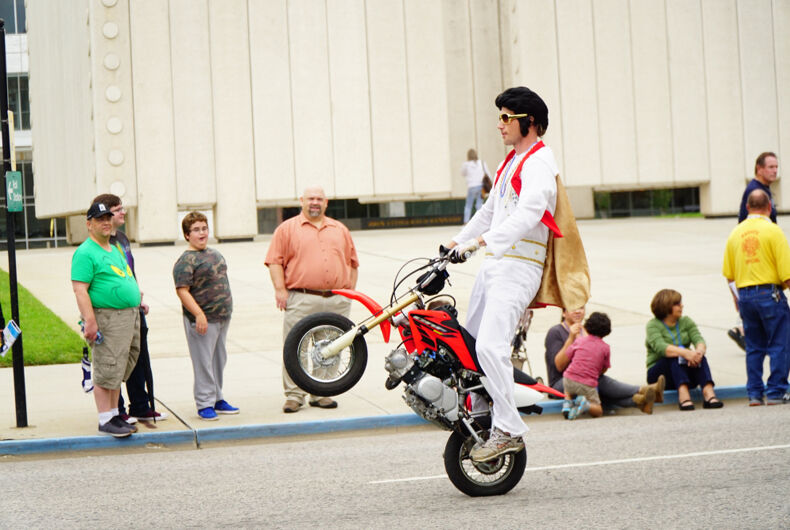 9/28/2018: An Elvis impersonator pops a wheelie during the Texas State Fair parade.Photo: Shutterstock

So who is Mark Sahady. Oh, just your average Trump-loving, commie-hating extremist who wants to throw America’s enemies from a helicopter.

Sahady is a force behind the Boston chapter of a small far-right group called Resist Marxism. While Resist Marxism would like to have you think it’s all about protecting America from leftists, it traffics in anti-Semitism and white supremacism.

In 2017 Sahady organized a “free speech” rally that featured Kyle Chapman as a speaker. Chapman, who is a hero to the far right for once bashing an anti-Trump protester over the head with a wooden post, wore an t-shirt reading “It’s ok to be white.”

As the Boston chapter of Democratic Socialists outlined, Sahady likes to get his picture taken with a tattooed neo-Nazi. He also likes to travel around the country to participate in far-right protest marches while wearing black gear and a helmet.

Sahady’s stunt is another reminder of the strong connection between the far right, white supremacy and anti-LGTBQ hatred. The Straight Pride movement is inextricably linked to the White Pride movement. The only saving grace: you just know those floats are going to be pathetic.

Jeanne Manford was not just the ultimate ally. She was our mom.