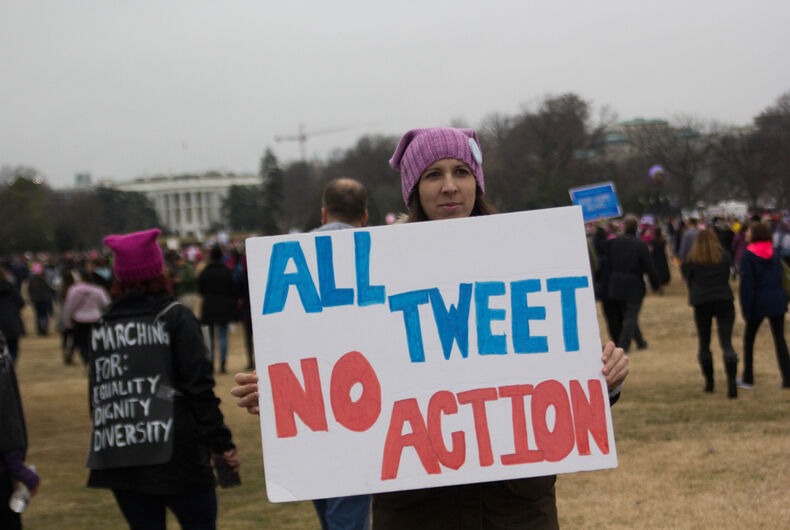 Participants in the Women's March on Washington march in front of the White House in Washington, D.C., Saturday, January 21, 2017Photo: Shutterstock

“We Americans, organized as American citizens with American ideals, are determined to protect ourselves, our homes, our spouses and children against terrorist migrants and the fake media enemies of the people in our schools, our universities, our very homes!”

This easily could have come out of the mouth of Donald J. Trump at any of his “Make America Great Again” rallies.

It represents, however, the paraphrased words of Fritz Julius Kuhn, a naturalized U.S. citizen and leader of the German American Bund prior to World War II, who stood on a stage on February 20, 1939 in front of over 20,000 applauding spectators at New York City’s Madison Square Garden below a giant picture of U.S. President George Washington who allegedly never uttered a lie.

At his “Americanization Rally” that evening, Kuhn shouted into the microphone, “We, the German American Bund, organized as American citizens with American ideals are determined to protect ourselves, our homes, our wives and children against the slimy conspirators and the parasite hand of Jewish communism in our schools, our universities, our very homes.”

Kuhn denounced “Frank D. Rosenfeld” and “the Jew Deal,” and he called for a “white Gentile-ruled U.S.”

Upon hearing these words, a member of the audience, Isadore Greenbaum, an unemployed plumber, lunged the stage at Kuhn and was quickly pummeled by uniformed police officers and Bund guards to the cheering delight of the crowd.

Kuhn did not have to promise what Trump shouted at his rally on the day of the Iowa caucuses in 2016.

“If you see somebody getting ready to throw a tomato, knock the crap out of them, would you? Seriously, OK? Just knock the hell,” Trump promised. “I promise you I will pay for the legal fees. I promise, I promise.”

Kuhn and his American Bund were part of Adolph Hitler and the Nazi regime’s concerted “softening up” project to destabilize western democracies from within their own borders on Hitler’s path toward war and world domination. Following Japanese Emperor Hirohito’s appropriation of Manchuria and Mussolini’s successful takeover of Ethiopia, Hitler concluded that western sovereign nations were not interested in intervening.

He established his Institute of Geopolitics in a large building in Munich headed by Karl Haushofer to undertake the intensive investigation into the cultures and politics of countries throughout the world in an attempt to discover the most appropriate means of undermining them for “softening.”

Previously, Haushofer founded and served as editor and chief contributor of the Zeitschrift für Geopolitik (Journal for Geopolitics) in 1924.

“Demoralize the enemy from within by surprise, terror, sabotage, assassinations. That is the war of the future.”

Stemming from his stated philosophy, Hitler deployed agents all over the planet disguised as students, tourists, and commercial business representatives who established contacts with local right-wing politicians and political parties. On occasion, these secret German agents offered large bribes and, in some cases, threatened to make public allegations of corruption if they failed to play along.

Conspiring with the Nazis was Belgian politician, Léon Joseph Marie Ignace Degrelle, who achieved prominence in the 1930s as head of the Catholic authoritarian Rexist Party. He eventually fought on the side of the Germans following the occupation of Belgium, and he went into exile in Francoist Spain following the war where he remained a key leader in neo-Nazi politics.

To soften up their eventual takeover of Austria and Czechoslovakia, German agents infiltrated political parties already interested in annexation with the German homeland.

These right-wing parties with their German counterparts instigated destabilizing riots and anti-government demonstrations, while taking their marching order directly from Berlin.

Within the Fatherland, the Nazis initially expanded its war-making capacities by secretly increasing production of planes, tanks, and firearms. Later, the government also flagrantly violated the terms of the Treaty of Versailles in its legally allotted 100,000 members of its military by instituting conscription for able-bodied German men.

Hitler whipped up German nationalist sentiments by weaponing grievances against the harsh realities brought about by the Treaty, and by blaming internal enemies – Jews, Roma, homosexuals, non-Aryan immigrants – for crime and severe economic privation.

Through the “softening up” process, Hitler and the Nazis found little resistance from local populations and from the world community in its relatively easy takeover of the Rhineland, Austria, the Sudetenland, and all of Czechoslovakia.

Just imagine the countless possibilities if Hitler’s Reich Minister of Propaganda, Joseph Goebbels, had access to modern-day social media. If he had, he would use it much like the modern-day softening up aficionado, Vladimir Putin of the Russian Federation.

The Russians have taken the fine art of infiltrating and swaying internal affairs of other nations to its own benefit to the extreme by hacking into computer systems and manipulating social media in ways that effect election outcomes and instilling chaos in the social order by inciting existing tensions.

Russia has placed its heavy thumb on the partisan scale by attempting to influence the outcomes of political campaigns throughout Europe and the United States by exposing flaws and fractures and circulating rumors and false information disguised as fact about candidates it wants defeated at the ballot box and covertly and not-so-covertly supporting those in favor of closer ties with the Russian Federation.

The strands connecting politicians Russia finds most attractive include those who espouse right-wing nationalism using xenophobic fear of an imminent immigrant invasion by people who look, act, and believe differently from native-born citizens, people allegedly coming to take away jobs and social and economic benefits and who are determined to alter the cultural identity of the host countries.

Like Hitler, Putin also has weaponized grievance to whip up nationalist sentiments. Russia reaches out to so-called conservative “populist” politicians who desire to loosen longstanding alliances, treaty obligations, and economic trading relationships that do not serve Russia’s geopolitical interests such as the North Atlantic Treaty Organization (NATO), the European Union, the United Nations, and the Trans-Pacific Partnership (TPP) on global trade.

Russia supports the nationalist right-wing anti-immigrant governments of Hungary, Austria, Poland, and pro-Brexit British politicians and parties, among others. Putin certainly hit the jackpot in standing firmly on the side of the Donald Trump campaign and throughout his tenure in the Oval Office.

The North Atlantic Treaty Organization (NATO) infused the vital oxygen necessary to sustain a virtual peace on the European continent throughout the Cold War following World War II while enabling the spread of a democratic liberal world order to our current era, it stands in opposition to Russian expansionist agenda.

No matter how Trump spins it, our alliances with partnering nations have increased the security of all these nations, not the least being the United States. The only occasion in which the Collective Defense Article 5 of the NATO treaty has been applied (when one signatory country has come under attack, all others enter for mutual defense) was following the dastardly assault against the U.S. on September 11, 2001.

NATO countries joined the U.S. in going after Al-Qaeda and the Taliban in Afghanistan. The NATO taskforce remains today in a non-combat capacity to offer training, advice, and assistance to the Afghan security forces.

When Trump verbally attacks our long-standing and vital alliances while simultaneously imposing rigid tariffs on their products, he jeopardizes the national security interests of the U.S., and emboldens his friend and mentor, Vladimir Putin, in corrupting (softening up) and eventually toppling the liberal world order.

Trump encouraged Russia to cyberattack Hillary Clinton’s email server, and when the CIA offered conclusive evidence of Russia’s hacking into the Democratic National Committee, Trump has issued continual denials and challenges to the efficiency and accuracy of U.S. intelligence.

Trump nominated for the most important of all cabinet positions, Secretary of State, a man whose “international” and “diplomatic” background centers on negotiating oil and natural gas extraction and distribution deals with foreign governments, including Russia and many other repressive regimes like Chad, to line the pockets of repressive dictators.

The term useful fools (Russian полезные дураки, tr. polezniye duraki) refers in Russian to a person perceived as a beneficial mouthpiece for policies they do not fully understand, and who are contemptuously exploited by leaders for a goal or cause.

Though often attributed to Vladimir Lenin, controversy surrounds its actual coinage. It seems very clear, however, that Donald J. Trump has and will continue to serve as Vladimir Putin and other demagogues’ useful fool in the scope of international relations (and domestic issues), since he knows either nothing, does not fully understand foreign policy issues, and quite possibly does not want to know.

In his refusal to take daily intelligence briefings or delve deeply into these issues, he demonstrates his lack of interest in learning.

He claimed he “knows more about ISIS than the generals.” In addition, Trump said that he would “certainly look at” pulling the United States out of the North Atlantic Treaty Organization (NATO) because it is “obsolete” and “is costing us a fortune.”

Trump supports Britain exiting (Brexit) the European Union and has encouraged other countries to follow suit.

When a country, any country, asserts itself as the most remarkable, exceptional, perfect country relative to all others, and that that country needs to stand alone, it places itself on a path toward manipulation and destruction by demagogues.

Ironically, by loosening external alliances, nationalists and nationalism jeopardizes national sovereignty leaving the nation vulnerable to outside influence and internal stagnation and decay. In the end, those bent on softening up, the Hitlers and the Putins, win.

As John Donne wrote: “No man is an island, entire of itself…” The same can be said about a nation.