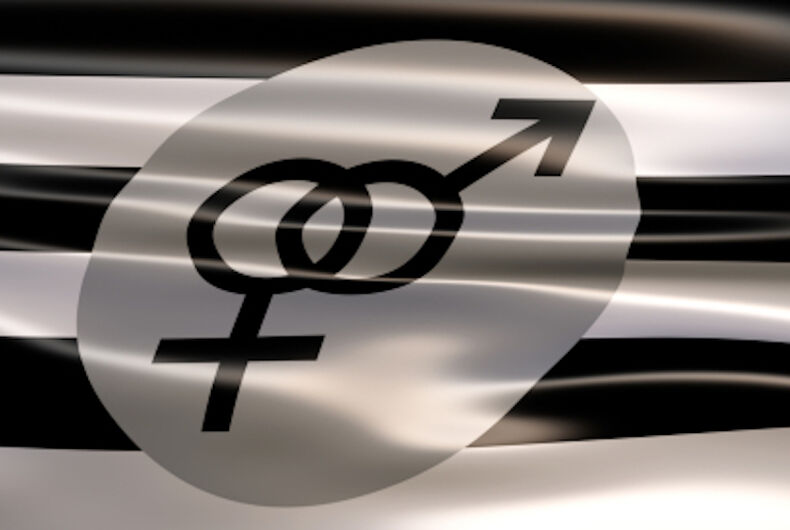 Last year, Amazon got some negative attention after one of its retailers, the company 1000 Flags UK offered a gold-plated “straight pride flag” pin for 4.50 pounds (six dollars). Though the retailer later removed the pin, other retailers have joined the heterosexual foolishness this year by offering their own “straight pride” gear.

According to Hornet, a retailer named Emblem-Gifts is selling four varieties of “Straight Pride LGBT Oblong Lapel Pin Badge” for 4 pounds (about five dollars). They feature three black-and-white flags with grey stripes and one pin showing a blue and pink color field united by an empty heart-shaped space.

In addition to the pins, there are also a handful of straight pride t-shirts. It’s unclear whether these shirts are being sold directly by Amazon or by other Amazon retailers.

While there’s nothing wrong with heterosexuals feeling good about their sexualities, “straight pride” is kind of like the “All Lives Matter” of LGBTQ pride — it’s more a reaction against queer pride than in support of anything else.

As one popular meme once said, “Pride was not born of a need to celebrate being LGBTQ, but our right to exist without persecution. So instead of wondering why there isn’t a straight pride movement, be thankful you don’t need one.”

And by the way, there is actually a “straight pride” movement — their parades just tend to fail.

Related: This vice mayor wants a Straight Pride to celebrate the end of “LGBTQ-WTF month”

After being called out for its straight pride pin last year, 1000 Flags removed the flag pin from its Amazon store. Mark Horler, one of the company’s directors said:

In no way [was the pin] produced as an anti-LGBT item and we take offense with that suggestion. These are not hate symbols. Our extensive range of LGBT flags, pin badges and embroidered patches has helped spread LGBT pride across the world.