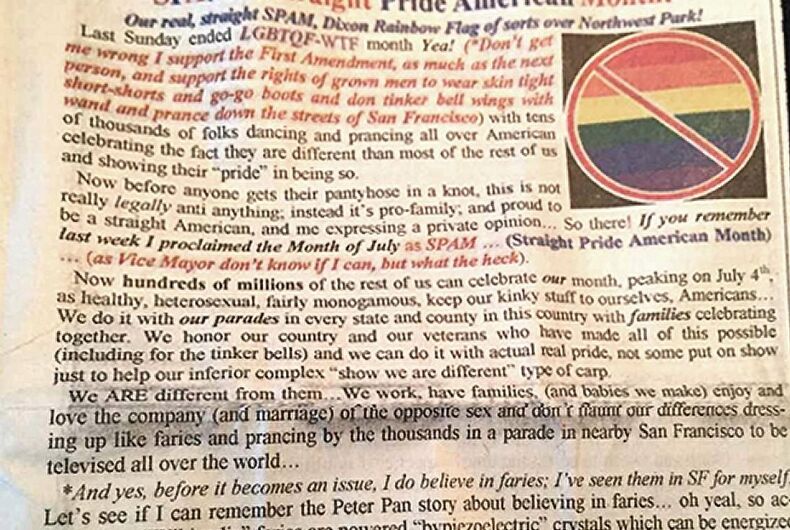 An elected official in California has come under fire for a homophobic column he had published in a local paper.

Ted Hickman is the vice mayor of Dixon, California, a town of about 20,000 near Sacramento. He has a column in the Independent Voice, a local paper, and last week his column announced “Straight Pride American Month” in July.

Last Sunday ended LGBTQF-WTF month Yea! (*Don’t get me wrong I support the First Amendment, as much as the next person, and support the rights of grown men to wear skin tight short-shorts and go-go boots and don tinker bell wings with wand and prance down the streets of San Francisco) with tens of thousands of folks dancing and prancing all over American celebrating the fact they are different than most of the rest of us and showing their “pride” in being so.

The column, which was not edited by anyone, says that Straight Pride American Month isn’t “legally anti anything.” Instead, he said it’s “pro-family; and proud to be a straight American, and me expressing a private opinion.”

Despite his claim that Straight Pride American Month isn’t “anti anything,” the image that accompanied his column is the Rainbow Flag with a circle and a line through it, representing “no.”

“So there!” Hickman added, already defensive in a column announcing his idea. He also said LGBTQ people have an “inferior complex” and called gay men “faries” multiple times.

“It’s a different level of rhetoric that’s not befitting of public officials,” said Dixon resident Wyatt Mince. “People are entitled to their opinion, but he’s a public official and he needs to comport himself a certain way to serve the city.”

“There is no part of the community that is untouched by the venom that Councilman Hickman has spewed over the years,” he wrote on Facebook.

Hickman told the Sacramento Bee that his column was “tongue-in-cheek” and only “thin-skinned people took offense.” He did not explain what the humor was or how the humor wasn’t homophobic.

This isn’t the first homophobic column he’s written. Two weeks ago, he wrote, “I am proud to be a heterosexual, monogamous, married to the opposite sex, straight individual that knows what goes where and why,” and that he has “lesbian tendencies.”