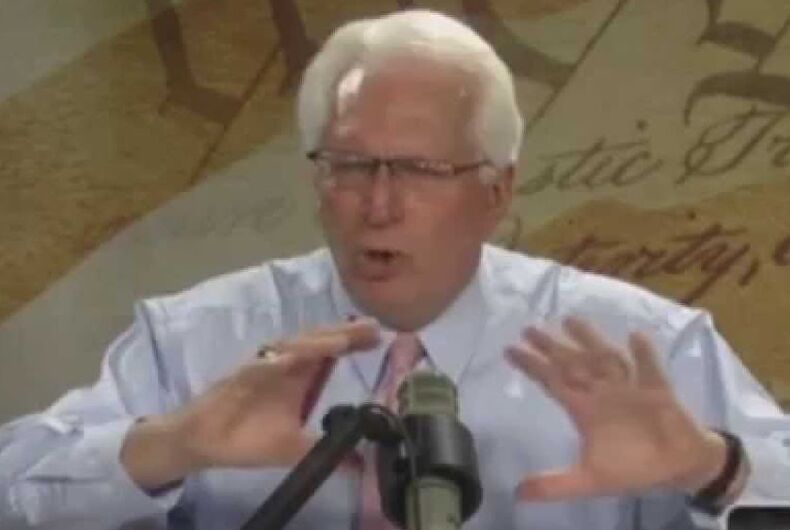 It hasn’t been a good month to be an anti-LGBTQ Christian. Conservative evangelicals have been rocked to discover that capitalism is not their friend and money will always outweigh morals.

First, Chick-fil-A, long lauded as a bastion of Christian values and the spot for religious fast food enthusiasts, announced they would stop donating to anti-LGBTQ groups after years of protests and boycott from progressive activists. It didn’t go over well with their longtime vociferous supporters.

Then the Hallmark Channel announced they were open to making holiday movies with queer central characters and ran an ad that showed two lesbian brides kissing. After an astroturf offshoot of an anti-LGBTQ hate group started making noise, the channel yanked the ads only to reverse course and reinstate them within hours.

“The gay gestapo, the bullies of the homosexual movement — and remember, their theme is ‘homosexuality uber alles,’ homosexual trumps everything — so they got a hold of Hallmark, they started getting in, getting after it, getting on Hallmark and they folded in about 48 hours,” according to American Family Association (AFA) radio host Bryan Fischer. Fischer is a former leader of the organization.

“They completely collapsed. They completely reversed. Now they are apologizing all over themselves for supporting normative sexuality. Another victory for the gay gestapo.”

The American Family Association is the parent group of One Million Moms, the front group that doesn’t actually have any members. One woman, Monica Cole, runs “the group” and mostly starts petitions and pens fundraising emails. She also works for AFA.

Cole sent out an email blast shortly after Hallmark changed their mind, citing the Bible verse that commands believers to kill gay people, saying the channel is “forcing tolerance and acceptance of homosexuality – a sinful lifestyle that Scripture clearly deems as wrong.”

“This LGBTQ spirit is the same spirit we read about in the Bible that confronted Lot,” she writes citing Romans 1:18-32. That verse recalls the story of Sodom and Gomorrah and ends by calling for the execution of homosexuals.

With calls for boycotts of companies who do anything perceived as pro-LGBTQ proliferating throughout the religious right, group after group has launched online “petitions” meant to cow companies into submission. The War on Christmas has become a full-on War on Commerce.

In Cole’s last angry missive, she included a link to a new petition.

These holiday stories will leave you warm inside