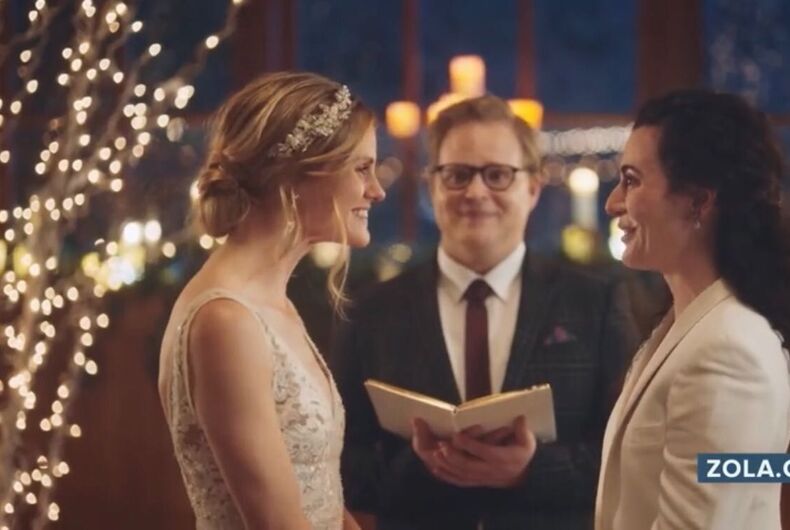 One Million Moms, a front group for the SPLC-rated hate group American Family Association, has been publicly encouraging its followers to express their outrage at the Hallmark Channel because they aired a series of ads that in part featured a lesbian couple.

Just yesterday, the New York Times reported that Hallmark Channel will no longer air the ad, because the channel does not air content “that are deemed controversial.”

Related: Dear Lifetime & Hallmark Channel, we have a holiday wish. You can make it come true.

The ads were produced by wedding website host Zola.com, featuring several couples ponder how their wedding day would be different if they used the website to publish their details for guests. Most of the six ads focus on straight newlyweds, but also include scenes from the one ad that focuses on the two women getting married.

The Hallmark Channel notified Zola that it is refusing to air four of them now, although the Times reports the network refused to answer why it was accepting similar commercials with only heterosexual pairings. In its explanation to Zola representatives, the channel spokesperson claimed that “We are not allowed to accept creatives that are deemed controversial.”

In response to the times, the Hallmark Channel claims that “The decision not to air overt public displays of affection in our sponsored advertisement, regardless of the participants, is in line with our current policy,” despite one of Zola’s two ‘acceptable’ ads featuring a straight pair kissing.

While Hallmark Channel’s parent company, Crown Media Family Network, stated Friday that “the debate surrounding these commercials on all sides was distracting from the purpose of our network, which is to provide entertainment value,” Zola is not buying that response because the company previously ran ads with same-sex couples with no hiccups. Mike Chi, the website’s chief marketing officer, told the Times that the company will no longer advertise with Hallmark. These ads still air on other networks and Hulu, according to The Advocate.

“The only difference between the commercials that were flagged and the ones that were approved was that the commercials….included a lesbian couple kissing,” Chi said. “All kisses, couples and marriages are equal celebrations of love.”

The decision by the Hallmark Channel will certainly dishearten many of its fans, who were hoping to see more LGBTQ+ content from the network. After calls to make a holiday movie that focused on non-heterosexual characters, Crown Media CEO Bill Abbott said on a podcast that he was “open” to the possibility of that. As we reported last week, this worried conservative media outlets so much that one website went and created a petition campaign that was reported to be filled with faked “signatures”.

Upon airing of Zola’s ads, One Million Moms sent an email blast to its followers and published a plea to the Hallmark Channel, saying these wedding commercials “go[es] against Christian and conservative values that are important to your primary audience.”

“You will lose viewers if you cave to the LBGT agenda,” they pledged.

It appears that despite the Crown Media is apparently not so open to the idea of having LGBTQ+ people represented on its channel as thought, especially if they share affection for each other.

Zola has made several of the 15-second and 30-second spots available on their YouTube, some published since the news of the ads’ denial from Hallmark became known. The ad featuring the lesbian couple has been viewed over 200,000 times in one week.