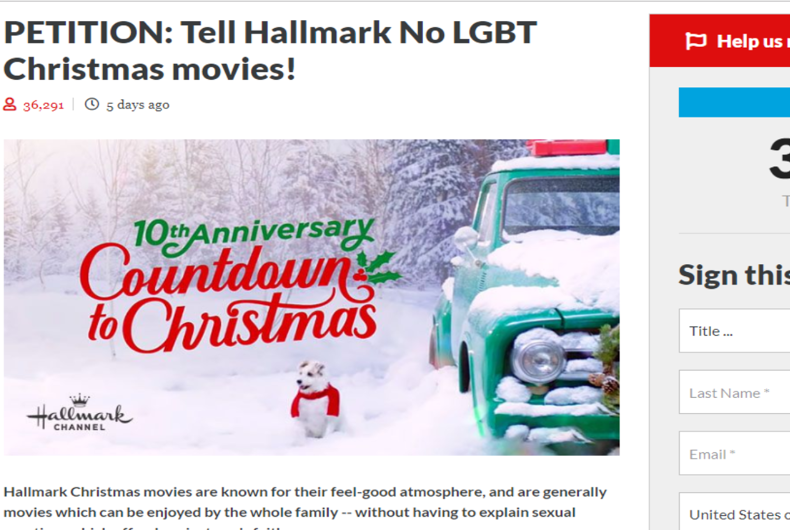 A screenshot of the LifeSiteNews "petition" at time of publication.Photo: via Screenshot

A Day after Thanksgiving, one of our writers had a simple question directed at several TV and cable networks:

So, Hallmark and Lifetime, how long are we going to have to wait for that LGBT holiday romance movie? After all, the channels will produce at least 32 new movies each for the holiday extravaganza — 64 films between the two of them. Netflix, Amazon Prime, Apple TV and other streaming services also add to the holiday-movie producing spectacle with many of their own. We don’t exist in them, but we should, since the demographics, ratings and advertising dollars for LGBT shows are already there.

Related: “Bicentennial Man” was the best trans movie of 20 years ago

Further along in our article, the writer explained how characters that reflect reality, including those who are LGBTQ, make for more successful projects all around the entertainment industry. “three movies last year with major LGBT characters made over $100 million at the box office. Universal Studios even has a program to increase LGBT participation on screen and behind the camera,” he reports.

“The formula you have, we all love, and it will work just as well for a gay couple….so, Hallmark, Lifetime: How about a gay Christmas in 2020?”

The simple request for representation have sent several people spiraling, trying to stop what they have interpreted as part of a wider spread, delusional “War on Christmas”.

Right around the time we published the story, an interview with Hallmark’s parent company CEO was released in which he responds to claims that the channel’s “Countdown to Christmas” isn’t diverse enough. When questioned about whether a gay-led film could ever be put in the works, CEO Bill Abbott simply claimed that he was “open” to the possibility of one. He also revealed in the November 15-recorded podcast he doesn’t personally view Christmas as a religious holiday.

“That answer, fueled with our article challenging for more representation in the genre, enraged conservatives who called them “the next Chick-fil-A” (insinuating they’re caving to LGBTQ+ people), and questioned how “family friendly” the TV network is. One evangelist site called out “the homosexual mafia” for trying to get one movie with non-cisgender or straight main characters in it.

While both Abbott and Vice President of Programming Michelle Vicary confirmed that there is no LGBT-led Christmas films in the work currently, but they would consider one, several conservatives banded together to sign anything that allows them to keep their TV Christmas films as homophobic as possible.

LifeSiteNews ran a petition “begging for help” from readers to prevent this from potentially happening. “Hallmark would be offending Christian viewers and Christian parents BIG TIME, by experimenting with homosexual themes, and, or cooperating with the LGBT indoctrination agenda,” it reads in part.

Based on analysis from Out Magazine, the petition that had supposedly gained over 30,000 signatures was a fluke. “They have been grossly inflated in an attempt to reverse-engineer backlash,” they report.

“To wit, individuals can sign the LifeSiteNews petition as many times as they want, so long as they list a new name and email address. For instance, Out was able to fill out the petition half a dozen times under names like “Rick Santorum,” “Audrey IV,” “Deacon Rumpy Pumpy,” “Rev. Mr. Kool-Aid Man,” and “The Ghost of Titsmas Past.” A few emails were rejected….but most others were accepted.”

The tactic of suspicious online petitions through shoddy signature gathering methods is so commonplace among right-wing groups on the internet that it’s become almost expected. It’s just what they do.

….As LifeSiteNews’ petition numbers continue to rise through nefarious means, the decision as to whether executives decide if queer people get to celebrate Christmas, too, shouldn’t be determined by manufactured outrage.

Out also notes that outside of Hallmark, there are already LGBTQ-inclusive holiday film projects in the works, such as a Kristin Stewart-led lesbian romance and Freefrom has a Valentine’s Day queer movie in its plans. Lifetime movie Twinkle All The Way ends with a kiss between a gay couple, although they are not the protagonists of the film, and Netflix’s Let It Snow starring Shameik Moore and Isabela Moner also features a spark of interest between the characters of Liv Hewson and Anna Akana – but is not explicitly focused on their potentially lesbian relationship.

“The purpose of the petition, according to LifeSiteNews, was to prove that there is significant opposition to the making of an LGBT-themed Christmas movie, but knowing that a great deal of the signatures probably came from the same number of people, their whole point kind of falls apart,” wrote Instinct Magazine.

The fact that conservative media finds this cost so important to boycott and create outrage over, while their president is being impeached and their elected officials are refusing to run again, tells you all you need to know about them. They know LGBTQ+ representation is on the rise, and more widely accepted and applauded then ever before.

Since a majority of their base bemoans such respect or human decency, they know they’ll get attention if they make it seem that several thousands of people lash out at the mere idea of a movie. If embarrassing themselves was the goal, then mission accomplished.