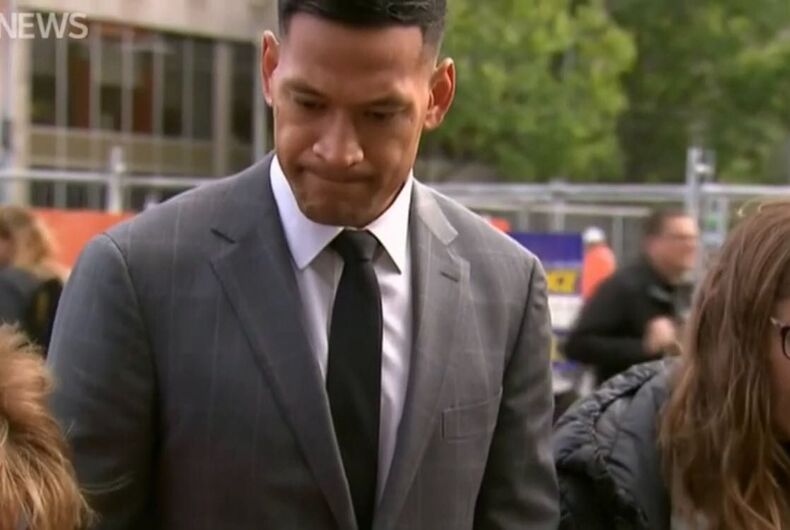 Israel Folau, praying outside of a hearing before the High Court of Australia.Photo: Screenshot via YouTube

From 2018 until now, Australian rugby player Israel Folau has constantly made homophobic and transphobic remarks, including saying “HELL AWAITS YOU” to all “homosexuals”, among other “sinners” in April 2019 and blaming bushfires on ‘evil’ same-sex marriage in a sermon last month. He was terminated the day after his April comments, and told a Christian group he would say it again.

Now, he walks away with a huge check, an apology from the league, and the opportunity to play rugby anywhere he chooses. In fact, the post that caused his termination is still up for all to see.

Despite saying that homophobia “has no place” in the sport in 2015, the now-fundamental Christian has proudly used his huge following on Instagram since then to promote hatred for gay people and transgender youth.

After the Rugby Australia league upheld their decision to fire him in a May 2019 hearing, Folau launched a Fair Work Commission complaint – and a GoFundMe to pay for the legal proceedings, which was shut down less than a week in. A second crowdfunding effort set up by the Australian Christian Lobby (ACL) raised over AUS$2 million, matching the AUS$2.1 million he reportedly took home in 2018 alone.

Meanwhile, after the Commission could not get the two to a mutual decision, Folau took Rugby Australia to court for wrongful termination. He initially asked for $10 million, but eventually upped the ante by desiring AUS$14 million in damages from the league – equivalent to US$9.5 million.

A settlement was announced on Wednesday and did not name any monetary figure, but both sides each apologized for “any hurt or harm caused” to the other. Reports claim that Rugby Australia will send the Polynesian-descending athlete a check of up to an alleged AUS$8 million, although that figure is disputed by Rugby Australia chief executive Raelene Castle. “We made a decision that gave us cost certainty that put us in the best financial decision entering the new year in a positive way,” she said at a Sydney news conference.

Folau was raised Mormon and the son of a pastor. In the beginning of his career, it’s reported that Folau gave all of his salary to his father, who put him on a small allowance and “allowed” him a cell phone. By 2011, the 22 year old was offered a $4 million dollar contract – which he only took after his father convinced him to, as to “not let his family down”, despite “hurting inside.”

Folau admitted that after his family left the Mormon church, he began to live a life full with “Alcohol[,] Women[, and] Sins” before settling down, redefining his spirituality and marrying his wife, New Zealand netballer Maria Tutu’ia, in 2017. In 2018, he was reported as rugby’s highest paid athlete.

Despite his past, Folau feels no hypocrisy for shaming others for what he views as sins – now he is rewarded for it. He claims success for what he views as victory for his religious freedoms. He even posted a thank you message on YouTube alongside Maria, reporting that he feels ‘vindicated’.

The settlement surprised many, as it was revealed this week that Folau had admitted that his hate speech was harmful to the league, which was their basis for his termination. Commentators now mark this is a victory for free speech, and a researcher claims that this is actually good for LGBT youth because the settlement will “stop the misinformed armchair commentary” and “will have saved the lives of kids, in terms of long-term benefits.”

Sponsors such as Qantas and ASICS publicly condemned Folau and Rugby Australia several times over the last two years, which go against the league’s pro-LGBTQ stance – but league executive Castle said “never say never” to the prospect of Folau returning to their organization at some point. She maintains, however, that he “has been terminated” at this point and that “I think it’s clear to say our values are not aligned and…Israel coming back into the sport would not be acceptable.”

Some thoughts on the settlement below:

Raelene Castle and Israel Folau after they managed to settle before the trial. pic.twitter.com/2OiNPQ6fkG

Move on at what cost, though? Every young LGBT fan will see this news and despair. Our rights are always secondary.

If Israel Folau was sure he was going to win then why did he take an offer? Why didn’t he take it to the High Court to win for religion and make himself $14m? #Auspol

And not only that, you chose to supplant God. Who are you to tell people that God is punishing us with fire because of gay marriage? The indefensible is you telling me God’s word, here and now, as though you are appointed by God to explain your your bigotry.

We asked Hallmark for a gay Christmas movie. Conservatives were scared and created a fake petition.