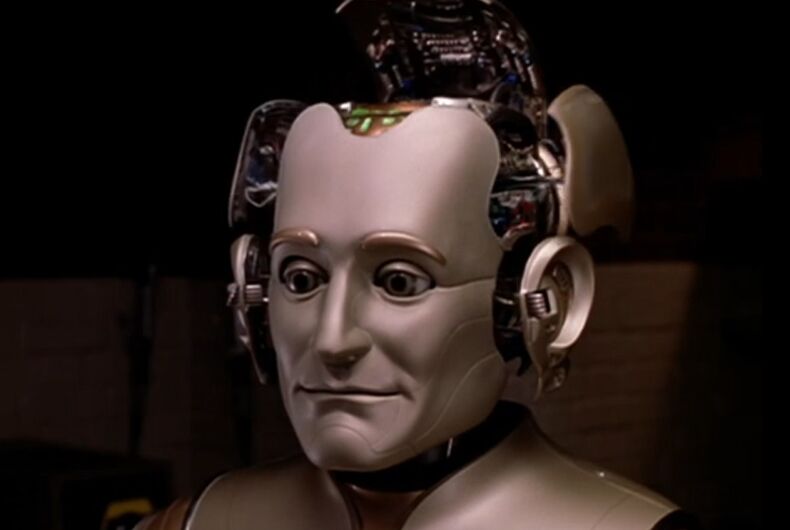 That’s not to say Hillary Swank’s Oscar was undeserved.  American Beauty was great.  Annette Bening’s performance in it was great (perhaps Kevin Spacey could hand his Oscar over to Bening?  Just a thought), but it was not Brandon Teena great.

The movie about the murders of Brandon, Lisa Lambert, and Philip Devine had come out a year earlier.  The Brandon Teena Story, a documentary, presented a coherent image of what happened in the economic wasteland of southeastern Nebraska on the last day of 1993.

Boys Don’t Cry doesn’t add anything to what The Brandon Teena Story had presented.  Arguably, it took more away.

Devine was little more than an afterthought in the documentary (that movie’s main failing) and he was absent entirely from the drama.

And Boys Don’t Cry spawned a lawsuit by the real-life Lana Tisdel – one that some contemporary reports led many (including myself) to scoff at as opportunism.  Those particular reports only mentioned she was upset at being depicted as “trailer trash.”

As to that allegation, watch both of the movies and judge for yourselves.

More extensive reports added that Tisdel also was angry at being portrayed as having been present when the murders occurred, not necessarily implicating her as a co-conspirator (the movie did not show her as a participant) but definitely diverging from the facts as we know them.

On that, she had a legitimate beef – one that by itself justifies the settlement she eventually received (whatever it may have been.)

So what was the best trans movie that was in the theaters as the last millennium transitioned into this one?

No one has the moral authority to proclaim that Robin Williams fully made up for Mrs. Doubtfire with his portrayal of Andrew Martin – but the notion should at least be entertained.

Andrew is the Martin family’s pet robot.  Early on it is clear that he has some degree of self-awareness – displayed not immediately via demands for autonomy but through something equally dangerous: creativity.  Andrew and the youngest Martin daughter (played by Hallie Eisenberg, who at the time – thanks to Pepsi commercial saturation – was arguably as famous as Williams himself) grow close; the older daughter, however, tries to kill him.

This dichotomy flows throughout the movie.  Some accept Andrew while others are repulsed; indeed, the older daughter never sees Andrew as anything more than, well, a thing.

Another dichotomy developed as well: within the family patriarch, who recognized and even encouraged Andrew’s development but is nevertheless offended when the not-so-robotic robot asks for his freedom.

Andrew didn’t really want to leave the Martin family; he simply wanted to be free. There is a difference.

The request was not well-received.  Ditto for another request.

Over the course of many years Andrew turned his creativity away from the crafty knick-knack items with which he initially attracted attention and to bio-medical devices; he even utilizes some of them to aid his journey to humanity.  And not surprisingly, he ultimately seeks government recognition of the reality that he is human – just not an average human.

But a court – of sorts – declares that someone who enters humanity from outside of the gene pool and who, for all practical purposes, is immortal cannot ever be regarded as or afforded the legal status of human.

Bicentennial Man was released barely six weeks after the San Antonio, Texas Court of Appeals made up law to suit its political ends, declaring that a different sort of transition was beyond the pale for law and society.

More than a few trans people noticed the parallel.

In a review of the movie two decades ago I confessed that I couldn’t decide whether the movie (and, for that matter, the Isaac Asimov novelette on which it was based) had a happy ending or not.  I also didn’t divulge the ending.  It was not Williams’ most popular movie to say the least (it did not break even at the box office), so I have to presume not all that many people know the ending.

That rejection by the court was not it.

More years pass and more of Andrew’s creations aid his physical journey even more.  Eventually, he is presented with the opportunity to undertake a procedure that will render the process complete: it will cause him to begin to age.

He will eventually die.

At the age of 200 – and as he lay dying – his request returns to the same court, now with different judges.

And, finally, with a different outcome.

In 2019, as much as I’d like to watch Bicentennial Man again (not just as trans allegory but to remember how great Robin Williams was – Caster Semenya jokes and Mrs. Doubtfire aside), I hesitate – knowing that a clock, managed by an entirely different court, might be about to run out.