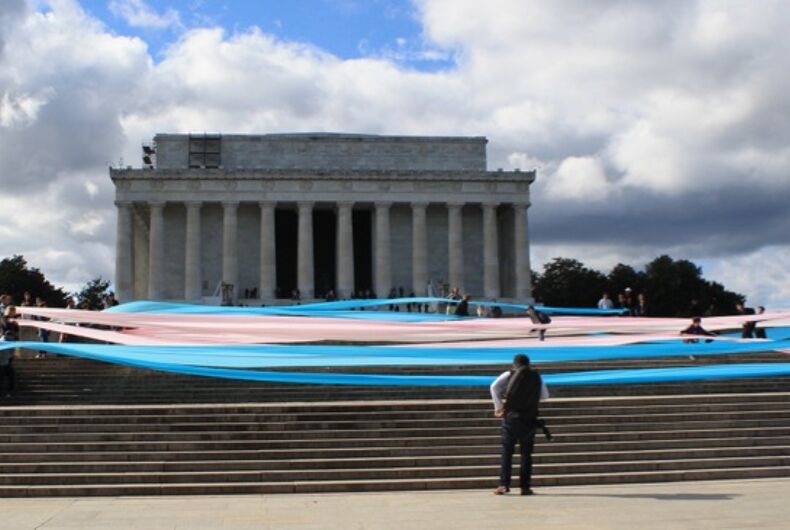 The 1999 Lavender Law conference in Seattle was fraught with the politics of the day: worries about what the 2000 elections would bring; the proliferation of anti-marriage and anti-parenting legislation; and trans people’s anger at still being excluded from the Employment Non-Discrimination Act (ENDA).

Even some who professed to not be fans of trans-inclusion were by then openly expressing skepticism about the asserted reasoning as to why it wasn’t necessary.  And pleas for inclusion elicited applause at the end-of-conference dinner – bright spots for sure.

Related: This trans activist recently shared her memories of the Stonewall uprising and early life in NYC

But there was also a sense of foreboding due to a court case then under consideration in San Antonio, Texas.

Christie Lee Littleton had sued those she felt were responsible for the death of her husband – entities who, in turn, said she had no right to sue because she could not be his widow because she was not a woman.  A trial court sided with that position.  She appealed.

On October 27, the decision came down.  Couched in the language of fake compassion, Court of Appeals Chief Justice Phil Hardberger declared, “There are some things we cannot will into being. They just are.”

Claiming to be deferring to the legislature, he nevertheless legislated the “chromosomes =  sex” standard from the bench.  And with a half-paragraph of similar arbitrariness he also dispensed with Christie Lee’s amended Texas birth certificate as being “not binding on this court.”

Not all judges in Texas ceased issuing name and gender change orders following Littleton v. Prange – but securing them became a chancier proposition.

Moreover, when a rat dies within the walls of a house, the ensuing stench rarely remains behind the sheet rock.

Right-wing pundits had another piece of ammunition to bolster their false, yet oft-believed, assertion that the law does not recognize transition.  Those with marriage-equality tunnel vision had a new non-marriage issue to ignore. Lav Law 2004 in Minneapolis bore witness to many variations on the ‘same-sex marriage will solve everything’ theme.  (Perhaps the LGBTQ parties in the upcoming Supreme Court cases will offer some thoughts on how well that position has aged.)

Now, one can make an argument that the trans community recovered from Littleton v. Prange.  After all, in 2014 Nikki Araguz prevailed in a similar case in Texas and the following summer brought Obergefell v. Hodges.

But all is not what it seems.

“Even if Littleton was correct at the time it was decided in 1999,” Corpus Christi-Edinburg Court of Appeals Justice Rogelio Valdez wrote in In re Araguz, “it is possible that the legal landscape has changed since then. And in fact, it has.”

Hardly.  It got more conservative – but it also got sloppy.  The pro-trans change in Texas’ legal landscape occurred during consideration of voter suppression legislation in 2009.

One draft list of acceptable voter ID documents appears to have been copied from a Georgia list (unlike Texas, Georgia, for all its faults, does have a trans birth certificate statute).  That draft list was utilized for a bill on marriage licensure.  And then no one noticed that “an original or certified copy of a court order relating to the applicant’s name change or sex change” would be acceptable to obtain a Texas marriage license.

Or, more accurately, no one noticed until after Texas’ GOP legislature and GOP Gov. Rick Perry gave it their collective thumbs-up.  And no one would fess up – either to being responsible for it escaping the notice of the legion of well-paid religious right lobbyists and mouthpieces or for it actually getting into the marriage bill in the first instance and then into the enacted law.

Where it was when Nikki Araguz needed it.

But she was born in California, which enacted pro-trans birth certificate legislation when Jerry Brown was governor the first time around.

Make no mistake, the 2009 Texas law helped Araguz and it helped other trans people.  But neither it nor Obergefell erased the aspect of Littleton holding that Texas law does not permit sex changes on Texas birth certificates.

And neither erased the Littleton decision from history; an anti-trans citation to it can be found among the Harris Funeral Homes Supreme Court briefs.

And, perhaps most of all, none of it helped Christie Lee Littleton.  She did live to see the In re Araguz decision – but just barely.

She died a month later.

Nothing ever resulted in her being retroactively recognized as Jonathan Littleton’s legal spouse.

Some judge-made damage can never be undone.

Katrina C. Rose is an attorney who also holds a Ph.D. in history.  Her dissertation is entitled “Forgotten Paths: American Transgender Legal History, 1955-2009.”

3 years before Stonewall, gay activists protested all over the country on same day