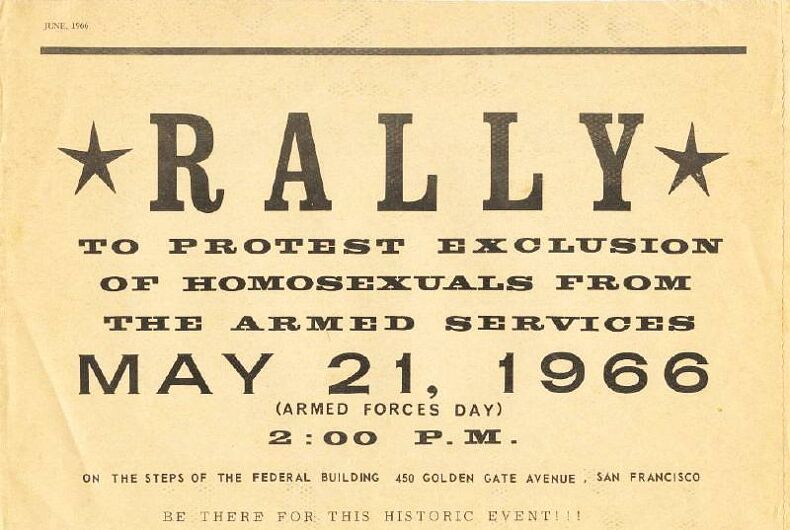 On that day, gays and their straight allies in six cities protested the Pentagon policy ban service that dated to World War II and resulted in at least 1,708 being kicked out that year by the Navy alone.

Related: Do you know the history behind LGBT History Month?

It was a time when society at large laughed often and loudly at the idea of what even a magazine popular with the Left called “The Fag Battalion.”

At the National Planning Conference of Homophile Organizations (NPCHO) held that February 19-20 at the State Hotel in Kansas City, Missouri, and attended by more than 40 activists from 15 different groups across the country, Daughters of Bilitis (DOB) cofounders and life partners Phyllis Lyon and Del Martin proposed local meetings involving both gay and nongay community leaders to discuss trying to end the ban.

Another attendee was Don Slater, WWII veteran, cofounder of ONE magazine, the first successful gay periodical in the US, and its editor when it fought the postal service all the way to the Supreme Court where it won the first national and one of the most historically important victories for equal treatment for gays.

Now representing Tangents magazine, Slater passionately argued that discussions weren’t enough and convinced the members to support a series of same-day protests in several cities. A Committee to Fight Exclusion of Homosexuals from the Armed Forces was formed, Slater was chosen as its spokesperson, and was soon giving interviews to mainstream media including The New York Times.

The endorsement by Lyon and Martin was particularly significant because it represented their having decided to stop following the DOB’s governing board’s continued opposition to public protest that had created a major schism in the movement the year before, and which both, then, had supported.

But by that January, Del had changed her mind, and wrote the board saying, “There is no time to wait for the machinery of DOB to gear itself into action.” She and Phyllis became lead organizers of the San Francisco action.

On May 21st, “An estimated 40 to 50 persons paraded with signs [in front of the city’s Federal Building and] a total crowd of close to 500 witnessed the demonstration and heard the speakers from the various groups” from a stage set up on a flatbed truck.

Phyllis’s picket sign read: “FOREIGN ARMIES DON’T EXCLUDE HOMOSEXUALS WHY SHOULD OURS?” Others included: “EVERY MAN HAS A RIGHT TO SERVE HIS COUNTRY,” “SEXUALITY DOES NOT DETERMINE PATRIOTISM,” and “STOP WASTING TAX PAYERS’ $$$ ON WITCH HUNTS FOR HOMOSEXUALS.”

Del spoke, as well as Rev. Cecil Williams, one of the first heterosexual African-Americans to take an active role in the fight for gays rights.

Hugely respected in San Francisco, Williams was a cofounder of the Council on Religion and the Homosexual (CRH) with Lyon and Martin and others. CRH was a cosponsor of the protest along with the Society for Individual Rights (SIR, the forerunner of today’s Alice B. Toklas LGBT Democratic Club), San Francisco Daughters of Bilitis chapter, San Francisco Mattachine Society, Citizens News, and the Tavern Guild of San Francisco.

Williams said: “There is a homosexual revolution here and across the land. We protest against the Armed Forces policing of discharging discovered homophiles under less than honorable conditions.”

Meanwhile, in Los Angeles, former high school ROTC member and original Mattachine cofounder Harry Hay was one of the leaders along with Slater of a motorcade through some twenty miles of Los Angeles streets protesting the ban.

Thirteen car roofs carried four-sided, four-foot tall signs with such messages as, “10% OF ALL GIs ARE GAY,” and “WRITE LBJ TODAY.”

C. Todd White wrote in Pre-Gay L.A. that the Los Angeles Committee to Fight Exclusion of Homosexuals from the Armed Forces had released a statement saying: “Millions of homosexual men and women have served with honor as soldiers, sailors, airmen and marines in the wars of our country” while having to “swear falsely before the examining boards, denying the truth about themselves under oath.”

They urged people to write the president and members of Congress, “to protest this waste of needed manpower and the unjustified denial of the right of a loyal citizen to serve his country in war.”

Slater reported in the next issue of Tangents magazine: “Asked if he would like to meet with persons who had just completed the first gay motorcade ever held, the City Editor of the Los Angeles Times replied, ‘Only if someone was hurt. All our reporters and cameras are in Watts’. As a small consolation Committee members did see themselves on CBS News at 6:00 and 11:00 that night.”

“[The day after,] Harry Hay discussed the military situation and the after-effects of the Los Angeles motorcade with Melvin Belli on his television show. He and Committee member John Burnside elaborated the whole question of the civil rights status of the homosexual in the U.S. later the same week on an hour-long Joe Pyne radio broadcast; and [I] was interviewed on the success of the demonstrations throughout the country on that same station on May 26th.”

Another of the organizers was Billy Glover who had been kicked out of the Army for being gay in 1956. He appeared on two television programs about the motorcade, and remembers Tom Brokaw, then a reporter for NBC’s LA affiliate, covering it.

That had more significance than it otherwise would, for in Brokaw’s sprawling and much-heralded 2007 book Boom!: Voices of the Sixties (which, actually, discusses events through 1974), there was not a single syllable about the gay rights movement for which WWII veteran and Mattachine Society of Washington cofounder Frank Kameny boxed his ears in a letter made public.

After cataloging just some of the many historic gay movement events Brokaw chose to ignore, including protests like the motorcade, Stonewall, out gay officials, and declassification by the American Psychiatric Association, he wrote, “Mr. Brokaw, I could go on, but this should be sufficient to make my point. The whole thing is deeply insulting. As I said, you have de-gayed an entire generation. For shame, for shame, for shame. You owe an abject public apology to the entire gay community. I demand it; we expect it. Gay is Good. You are not.”

Of course, no apology came, and Brokaw defended himself on CNN, doubling down, and was allowed to get away with drooling that, “the gay rights movement really came later after the ’60s, it really began to take hold in the ’70s.”

D.C.’s contribution to the coordinated events began with a picket in front of the White House led by Kameny followed by a four-mile march to the Pentagon and another picket. He, then, flew to New York to speak at a rally sponsored by the local chapter of DOB. It was his 41st birthday.

Slater: “In Philadelphia, a protest meeting was held by the Greater Delaware Valley Committee to Fight Exclusion of Homosexuals from the Armed Forces, sponsored by the Janus Society. Although poorly attended, Committee members had better success in handing out 10,000 protest leaflets to the general public at the Philadelphia Navy Yards.”

“The Phoenix Society of Kansas City – the youngest of the homophile groups – confined its activities to an organizational type of meeting in which invited friends and members discussed the issues. The Phoenix group put out its own statement, and joined with the other Committees in arguing for an end to the military ban on homosexuals.”

Collectively, the landmark first nationally coordinated gay rights protests attracted more mainstream media attention than any others to that date including the first protest at the Pentagon and three protests at the White House in 1965.

“The argument for a change in the penal code that would make their deviation no crime providing it was the private act of two contenting adults is an argument of merit. But it’s almost tragic that they chose to make their stand for acceptance by demanding the right to join the army. Such a totally impractical idea turns a serious social problem into material for a burlesque skit.” – Paul Coates, Los Angeles Times.

According to lesbian historian Lillian Faderman, Coates also quoted a colonel from the Office of the Assistant Secretary of Defense. “We’re responsible for a lot of kids. If we throw them in with homosexuals we wouldn’t have an army. We’d have chaos.”

Such homophobic comments paled in comparison to two pages of vicious cartoons in the September 1966 issue The Realist, a now-defunct magazine then popular with the Left for combining satire with political commentary. Its contributors included Norman Mailer, Ken Kesey, Mort Sahl, Abbie Hoffman, and Garry Trudeau.

Called “The Fag Battalion,” it specifically mentioned LA’s Committee to Fight Exclusion of Homosexuals from the Armed Forces, and helps illustrate why it would take another 45 years to end the ban. 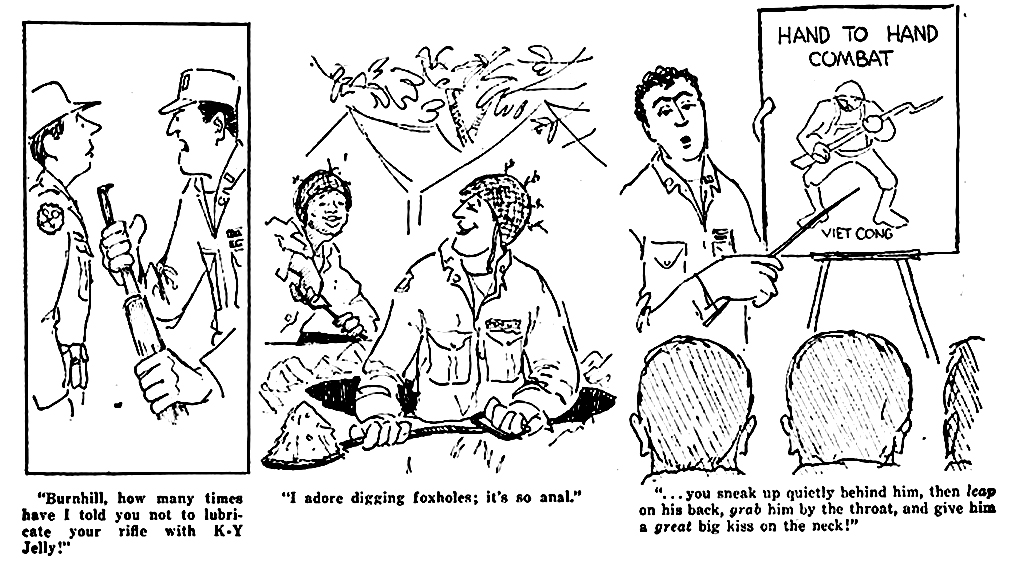 In 1999 a judge decided a trans woman wasn’t a woman. That decision is still being cited today.