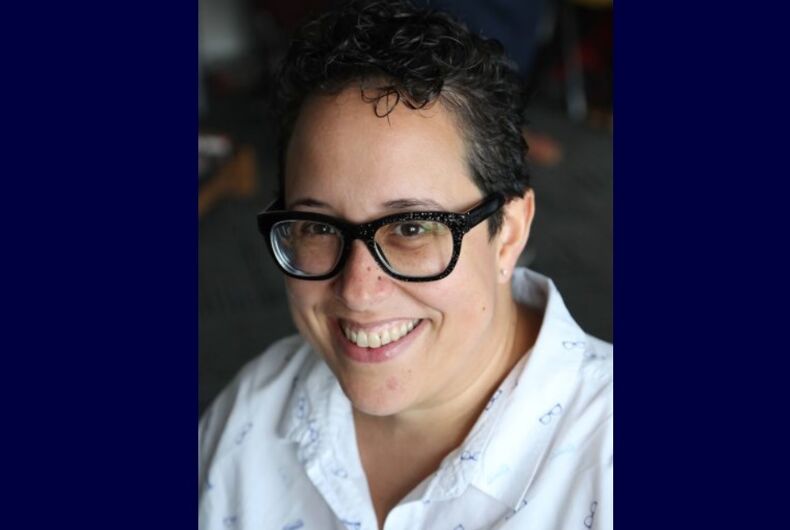 The theater is where Lillian Rivera first realized she could affect positive change in the world.

As an undergraduate at Rutgers University, she had the opportunity to join a community theater group that focused on educating people on social issues, specifically around sexual health. After graduating, she would go on to lead the group, which created pieces around the issue of sexual violence and would engage audiences in conversations about how they could work as a community to eradicate it, specifically for women, but certainly for all people.

“Through our education, we leveraged our theater background to challenge folks around their thinking in terms of sexual health issues like abortion, or STIs, those sort of issues,” she said.

That work at Rutgers laid the foundation for what would be a career focused on helping people have hard conversations in order to better understand each other.

Today, as the executive director of HMI: New Jersey, the sister organization to New York City’s Hetrick-Martin Institute, Lillian works daily with LGBTQ youth and their families to ensure they have what they need to thrive.

Indeed, as the child of Puerto Rican parents who came to the U.S. in the 1950s, Lillian understands well the challenges faced by many of the families she serves. In fact, raised in Jersey City, NJ, she comes from the same neighborhoods as many of them. It’s an insight she says helps her stand out in her role as a nonprofit leader, one who is also a Latinx lesbian.

“There aren’t a lot of us. My understanding of the world versus other folks who run LGBTQ organizations has been incredibly unique because my experience is very close to the experience of the young people we serve,” she said.

“I come from a working class background, I struggled to figure out who I was, lived in the same neighborhood as many of the kids do.”

Lillian uses her shared experiences with her youth as a way to communicate more effectively with them and their families, but what she strives to do most of all every day is present herself as a “possibility model” so they can see first-hand that there are paths they can take that will lead to happiness.

Lillian is a Latinx lesbian who has found someone to share her life with and who became a parent, things she says that many LGBTQ people, upon coming out, too often rule out from their lives as a possibility.

“Growing up, I never really had a reflection of who I was as a Puerto Rican working class lesbian who did things in the world, and had a family. For me it’s very valuable to be a possibility model for young people,” she said. “I want them to know that whatever choices they’re considering, that they’re possible.”

Her work is as important as ever, and she says she was reminded of that when the news about the suicide of a Tennessee 16-year-old, Channing Smith, surfaced recently. Nearly 20 years in with HMI: New Jersey, Lillian says she had hoped there would have been a shift by now in the need for the existence for groups like hers.

“I still have young people who are suicidal because of their identity, because they don’t feel good about who they are, who are targeted in school,” said Rivera. “I believe and dream and hope that someday we can not be a necessity, but until our society can embrace, and celebrate and nurture LGBTQ young people in all their beauty, then we’re definitely going to be needed.”

Being a Latina also gives her tremendous insight for her work. Many of the families she serves are Latinx themselves. She finds comfort and encouragement in the kind of acceptance she has seen by these families, something she says bucks the overriding narrative that communities of color are more or exceptionally homophobic.

“Do they totally understand what’s going on with their kids? No. Do they have to go through their grieving process? Absolutely. Do they know where to get resources to go through that process? Not necessarily, but I’m privileged to help them through that,” said Rivera of many of the families she works with. “But, at the end of the day what they want for their child is the same things all people want for their children:  safety, a healthy future.

In fact, as some studies have shown, Latino families are actually more accepting than is commonly believed. Lillian credits the importance of family, and the often non-traditional family experience, in Latinx communities as central to that acceptance.

“I think for us its easy to understand non-traditional families and that’s a value for us,” she said.

“Our families are not a monolith, they are not just the 2.5 kids etc. They’re our tias, our tios, our abuelas. That’s our family.”

Building and sustaining community is especially important for Lillian right now. She’s especially concerned about the emotional well-being of the Latinx community and admits that resources and energy need to be invested into taking care of ourselves.

“It’s powerful and significant when the narrative about our community is that we are invaders and infesting, that we’re bad people. That will impact our children,” she said. “We have to be proactive and cognizant in ensuring that we are feeding our emotional well-being and that we’re taking care of each other.”

To do that, Lillian says that she and her colleagues put emotional wellness and healing at the center of their work, creating spaces of comfort and care that. In general, they look out for each other.

Lillian spent part of her youth in New Jersey and part of it in Puerto Rico, which is where she ultimately graduated from high school. While her time in Puerto Rico was especially formative for her in terms of understanding herself as a Latina, Rivera says she never realized she could be a lesbian.

“I didn’t know I could be a lesbian because I didn’t have any possibility models. It didn’t dawn on me. I didn’t register for me. I just thought my attraction toward other girls was the same as other girls felt about girls,” said Rivera.

That realization came to her around the age of 19, after what she describes as a long struggle with internalized shame. She first told her brother and then a close cousin, both of whom Lillian says were incredibly supportive and loving. Telling her parents, on the other hand, proved a bit more difficult.  Both struggled with understanding it and how it could be true. Her father’s strong Catholic upbringing, says Rivera, made it especially hard for him to accept.

“We had a moment where I said to him, ‘this choice is up to you. Either you have a relationship with me the way I am, or we don’t have a relationship.’ And, that took about 20 minutes,” she said. “I was a daddy’s girl until the day he died. Did he totally understand? No, absolutely not. But, did he love me and was he always going to be by my side? Yes. Absolutely. His child was his child and that wasn’t going to change.”

Today, Lillian’s wife and two children are warmly embraced and cherished members of her extended family. She credits them for all the blessings she counts in her life.

“I’m grateful to them for everything that they’ve ever given me and I hope to do the same for my children as they come into whoever they will be,” she said. “I celebrate and love all of who they are, and I wish for all children to be celebrated for who they are as opposed to who we expect them to be.”

Our experience in the United States as Latinx LGBTQ people is unique one and we need to lift each other up, says Lillian. “If you’re a Latinx elder, make sure you’re investing in the younger generations. And, if you’re younger, reach out to us so we can share with you our experiences.”

3 years before Stonewall, gay activists protested all over the country on same day