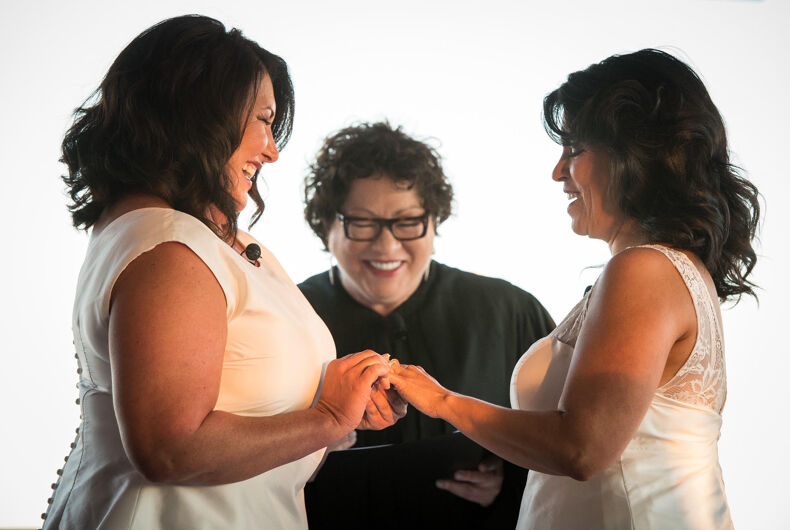 Catherine Pino and Ingrid Duran didn’t have a business plan when they launched their business, D&P Creative Strategies,  in 2004. The now-married couple only knew that they wanted to find ways to bridge the LGBTQ and Latinx communities, and that they wanted to do it together.

Working from their Virginia townhouse, in a bedroom, and with only one laptop computer, the couple set out to establish a firm that would help organizations and companies better serve Latinx and LGBTQ people across the country.

They had extensive experience in their respective fields. Catherine was a well-respected professional in the foundation world and was living in New York City. Ingrid had developed a name for herself in Washington’s political scene, having earned the top job at the Congressional Hispanic Caucus Institute. But neither of them had run a business before. It was also 2004, a not-so-distant time, when many in the culture and in government were unsupportive, or downright hostile, to LGBTQ issues.

They faced caution from some of their close friends who questioned the wisdom of the decision to start a company as “out” lesbians.

Despite the lack of business ownership experience, and the cultural perceptions of LGBT people, the couple was undeterred. Both had reached points in their career where they were ready for a change. And, after enduring a long-distance relationship between New York and Washington, they decided to start this adventure together and to change the world.

“It was important to  us to find ways to bridge the Latinx and LGBTQ worlds because, back then, there were so many things that were fraught between the two communities and it was important to us to change hearts and minds. We felt starting our own business and being in charge of our own destination was key to our mission, so we created D&P Creative Strategies.”

Today, that fledgling firm now boasts some of the country’s biggest names, a production company, and a political PAC aimed at supporting Latina candidates. The couple is a powerhouse in Washington, a duo that has become known for their dedicated work ethic and also their commitment to the service of others.

So much of what drives Ingrid and Catherine’s work is rooted in elevating Latinx people and their contributions. This is especially important right now while both populations, especially trans people, are under attack by a hostile administration. They help and encourage their clients to invest resources into organizations serving their local communities.

“For us, we work to make sure that people feel like they can speak out and not be afraid,” said Duran. “Especially in light of El Paso and the targeting of Latinos, I think it’s important for us to give back and do what we can to empower the groups that are working on the ground and making sure the corporations we’re working with are investing their resources into these trusted local entities.”

For Catherine, making a difference in this era means to keep full speed ahead in the fight for progress.

“Now is not the time to take the foot off the gas,” she said. “I firmly believe in my heart that this too shall pass, but how much damage are they going to do to our country and to our communities? We just both very much feel that we need to do as much as we can where we can and just keep working hard on these issues.”

Ingrid officially came out, ironically, she says, when she was in the Marine Corps. It was pre-Don’t Ask, Don’t Tell. She says she misinterpreted who of her parents would be supportive of her truth.

She had been a dating a higher-ranking  enlisted woman and the first of the many times they broke up, Ingrid was devastated. This was when she came out to her parents, hoping they would be sympathetic.

“I thought ‘My dad’s a Chicano activist, he’s not going to be accepting, and my mom’s a feminist Chicana activist and she’ll get it’,” she says. “I misjudged that totally.”

Her mom had several probing questions about what she had done wrong, whether divorcing her father had contributed, or whether it was the Marines.

“My dad was the complete opposite and just asked, ‘Are you happy?’ and if you are, I’m happy for you,” she said. “My mom struggled with what will people think, and it was a journey for my mom to come around, but when she did, she came full circle.”

Ingrid now enjoys a completely supportive relationship with her mother who loves Catherine and has welcomed her whole heartedly into their family.

Catherine’s first same-sex experience was when she was 16. The product of a staunchly conservative Catholic family in New Mexico, even raising the conversation about lesbianism was unheard of; it rocked her world.

“It was a very different time back then; I truly struggled coming to terms with these very intense feelings in an environment that didn’t celebrate being different, ” said Pino.

The day after Catherine graduated from college, she moved to Washington for an internship in former New Mexico Senator Jeff Bingaman’s office. While she loved DC and what it had to offer, Catherine calls the move integral to her self-exploration.

“In retrospect, I think it was important for me to make this move because I needed to discover who I was,” said Pino.

Catherine and her mom were (are) very close and when she found out, it really changed their relationship.

“My mom felt she had done something wrong, perhaps it was being raised by a single mom, the divorce, I just hadn’t met the right guy,” explained Pino.

As a result, Catherine says that she really struggled with her identity and endured severe bouts of depression related to this struggle.

“I had a really tough time,” she said. “My mom wanted me to marry a wonderful man, have 2.5 kids, and a white picket fence, but despite the amount of time going to mass every day praying for me, I didn’t meet that perfect guy; instead, I met the perfect woman.”

It was a journey and it truly brought she and her mom much closer.

“My entire family is incredibly supportive and they love Ingrid; she is an integral part of our family,” said Pino.

For anyone out there who has an idea and wants to start their own business, Ingrid and Catherine’s message is clear: Do it.

“You need to know what your plan is, but you don’t need to have a plan that fits into that SBA-format” Duran said. “Don’t let that hinder you from starting your business.”

“A great example is Pay Our Interns,” Pino added. “Here are two LGBTQ Latinx leaders with a deep passion and idea. Did they have a business plan? No, but they had a mission, and today the two founders, Carlos Mark Vera and Guillermo Creamer Jr have created a great nonprofit organization that includes many successes, including recently securing $6 million for the Senate 2020 Intern Fund. Don’t listen to naysayers!”

Ultimately, Catherine and Ingrid say that what is most important is to follow your passion, do what you love, don’t forget where you come from, give back and always remember that authenticity is everything.

Here are the most popular gender neutral baby names in America