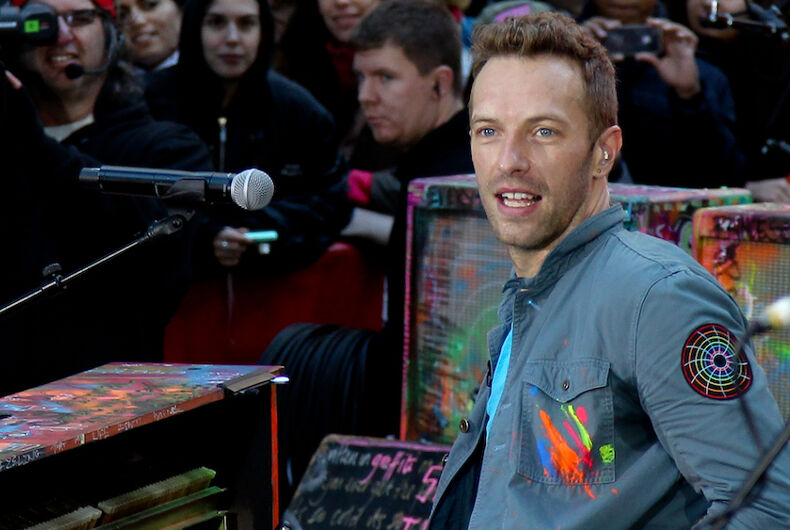 In a 36-minute video interview with Rolling Stone founder and editorial director Jann Wenner, Coldplay’s heterosexual frontman Chris Martin said he was bullied by childhood schoolmates for being perceived as gay.

In response to the bullying and his Christian belief that homosexuality would doom him to eternal damnation, Martin became somewhat homophobic. The “terrible turmoil” also compelled him to escape into the “classic soul, British shoegaze rock and cathedral music” that would eventually influence his band’s trademark sound.

Related: Viewers are angry at Beyoncé and Coldplay for “promoting homosexuality” at the Super Bowl

In the interview — which served to promote Coldplay’s eighth album, Everyday Life — Martin said that he “walked a bit funny and… bounced a bit” while attending boarding school.

“A bunch of quite hardcore kids… for a few years, they were very much like, ‘You’re definitely gay,’ in quite a full-on manner, quite aggressively telling me that and it was weird for me for a few years,” Martin said.

While Chris wasn’t sure at the time if he was gay, he still felt conflicted about it because he thought, “If I’m gay, I’m completely f**ked for eternity… Even if I am [gay], I can’t be because it’s wrong.”

After several years of worrying about it, Martin said he started reading about the life of Elton John. Then, at around age 15, Martin decided that it wouldn’t necessarily be a big deal even if he himself was gay. Around the same time, the teasing from his classmates also stopped.

“I don’t know what it was,” Martin told Rolling Stone. “Maybe it was reading about Elton. I really don’t remember. Maybe just growing up a bit and having a bit more exposure to the world thinking, ‘A lot of my heroes are gay’ or whatever.”

He continued, “Whatever [the reasons my worrying stooped] are, it doesn’t really matter. So what that did was ease a big pressure and then made me question, ‘Hey maybe some of this stuff that I’m learning about God and everything — I’m not sure if I subscribe to all of this particular religion.’”

While he described his relationship with religion as “wobbly” for the next few years, Martin eventually decided that he had his own unique conception of God which drew from more than just one religion.

“Bicentennial Man” was the best trans movie of 20 years ago