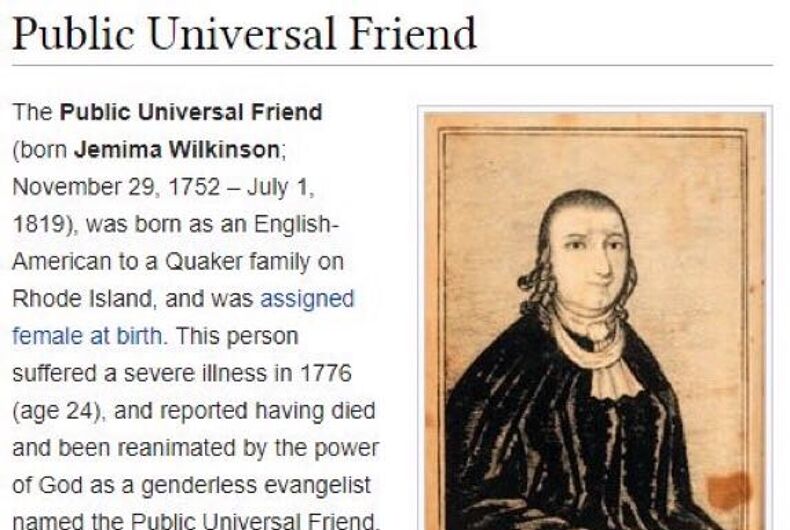 A screenshot of the Wikipedia article for Public Universal Friend.Photo: Wikipedia

A Twitter user recently created what became a viral moment on the social media website, after sharing the Wikipedia article of a genderless person from the 1700s. @CommanderSnacks shared a screenshot of the story of Public Universal Friend, calling the Friend the “coolest f*cker ever, and an insp[iration] to everyone who wants a cool new name”.

“The Public Universal Friend (November 29, 1752 – July 1, 1819) was an American preacher born in Cumberland, Rhode Island, to Quaker parents,” the Wikipedia article reads at time of publication. “The Friend suffered a severe illness in 1776 and reported having died and been reanimated as a genderless evangelist named the Public Universal Friend, and afterward shunned both birth name and gendered pronouns.”

Related: Two men accidentally propose to each other at the same time in a heartwarming viral video

“In androgynous clothes, the Friend preached throughout the northeastern United States, attracting many followers who became the Society of Universal Friends.”

this is the coolest fucker ever and an insp to everyone that wants a cool new name pic.twitter.com/i4K2knf36p

“The Society of Universal Friends ceased to exist by the 1860s,” the free encyclopedia’s saga continues, “Many writers have portrayed the Friend as a woman, and either a pioneer or a fraud, while others have viewed the preacher as transgender or non-binary.”

In the present day, A Twitter moment documents just how much Public Universal Friend’s story amused and inspired several people. See some of those tweets below:

christians : you're either male or female!

Btw, quick clarification for Non-Quakers, Friend in this context refers to the Society of Friends, AKA the Quaker community, so the name is not quite as goofy as it initially appears.

I hope Public Universal Friend is smiling upon us

dropping everything to learn more about the Public Universal Friend https://t.co/RfidETjVMY

This underscores something I have long believed- that our collective view of The Past as some staid, static, & fundamentally conservative place is a fictive editing process that largely leaves out unique personages like Public Universal Friend. https://t.co/xwwz3DSRhc

Other notable accomplishments that Wikipedia notes for the Friend’s legacy includes “erect[ing] a grain mill, the first mill in western New York, at Dresden, New York, now marked with a New York state historic marker,” having a home and later burial place included on the National Register of Historical Places, and having a species of weeds nicknamed after the Friend (using the Friend’s former name, however.) The Friend was also able to recite from the Bible from memory, and would not carry one when delivering sermons.

“The Friend and followers were pioneers of the area between Seneca and Keuka Lakes,” the article opins.

You can read more of the Friend’s story on Wikipedia, or other biographies on them – one published in a book as recently as 2015, and also on PBS and Qspirit.net.

We asked Hallmark for a gay Christmas movie. Conservatives were scared and created a fake petition.