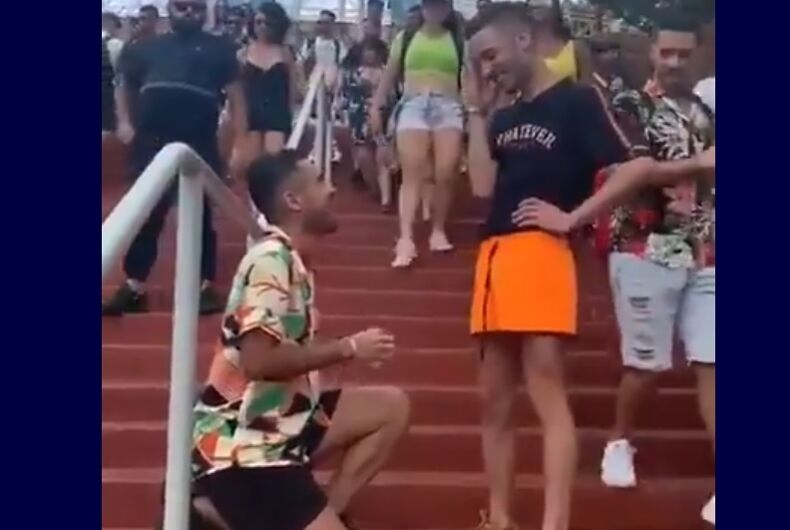 The first one is on one knee, not knowing that his boyfriend has a ring too.Photo: Screenshot/Twitter

A video of a gay couple proposing to each other at the same time has gone viral on Twitter.

The video was shared by @MemesFolder, an account that shares memes and short videos. In it, a gay couple is standing on stairs in front of a Ferris wheel, sharing a kiss.

Related: This deaf man got his hearing back. The first thing he heard was his partner proposing.

One of the men takes a small box out of his shorts and gets on one knee, while the other covers his mouth, shocked. He then walks over to his backpack and takes out a small box himself.

A crowd that has gathered around the couple starts to applaud, scream, and cheer as they see what happened: both of the boyfriends planned on proposing on the same day.

The video has been viewed over two million times on Twitter, but no one in the comments seemed to know who the men are or even what country they’re in.

Since @MemesFolder is not an LGBTQ account and has over 230,000 followers from all over the world, the comments section on the video immediately turned toxic. But many people still loved it.

“I can’t understand people who see disgust in this type of thing. To me it’s beautiful,” one person wrote.

“The face of the one who proposes first when the other also takes out a ring … great!” another person responded.