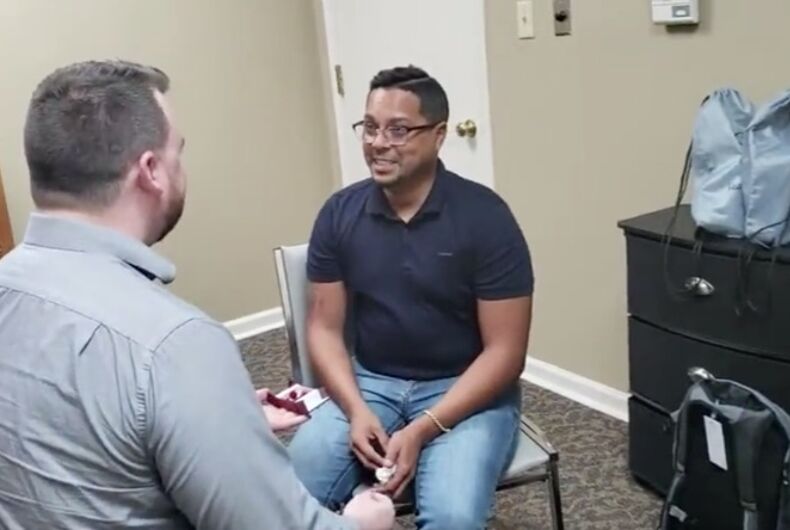 Kerry Kennedy proposed to Hayward Duresseau immediately after he regained his hearing.Photo: screenshot

Kerry Kennedy and Hayward Duresseau were traveling when tragedy struck. Duresseau contracted bacterial meningitis during a trip to San Francisco and was hospitalized for weeks as he recovered from the life-threatening illness.

Duresseau lost his vision and was paralyzed from the waist down for three weeks. He also permanently lost his hearing.

When Duresseau started complaining about a severe headache and light sensitivity, they thought it was from drinking the night before. But when Duresseau’s symptoms worsened, they rushed to the hospital.

While they saw there was a meningitis outbreak in the city, Duresseau says the couple didn’t really know what it was.

“We didn’t know anything about it, so we ignored it,” he said.

The next six months were rough for the couple as they quickly learned American Sign Language and tried to communicate.

“In a relationship, communication is key, you know? We were left without communication for about six months,” Kennedy told Buzzfeed.

“I could see everything that was going on — I could communicate, but the world couldn’t communicate back with me,” Duresseau added. “He would place the ‘I love you’ sign on my leg or on my back, and that’s when I knew I could go to sleep.”

So when Duresseau was approved for a cochlear implant that would restore his hearing, he jumped at the opportunity. Since there’s a recovery period before the device is turned on, Kennedy had time to plan his proposal.

“We had talked a little bit about getting married — well, signed about it, at least,” Kennedy said. “I wanted the first thing that I said to him to be asking for his hand.”

And that’s exactly what happened. With the audiologist’s approval and friend and family gathered in the room, Kennedy got down on one knee.

“I was in shock,” Duresseau recalled. “I’m hearing all these click sounds, I’m hearing my brother speak, and I can hear Kerry, and the first thing that comes out of his mouth — it’s this big spiel about what we’ve been through and he’s down on one knee.”

Watch the big moment below and cry along with Duresseau as he regains his hearing in time to hear the love in his partner’s voice.

It's been six months since you lost your hearing to meningitis. These have been some of the most challenging months of our lives, but we made it together. Today your cochlear implant was turned on for the first time. For the first time in 6 months, you were able to hear me, and I knew exactly what I wanted to ask you. When you said "Yes" today, that made all the challenges worth it. I can't wait to spend the rest of my life with you. I love you Hayward Duresseau

Gilbert Baker may have designed the rainbow flag, but this woman made it happen