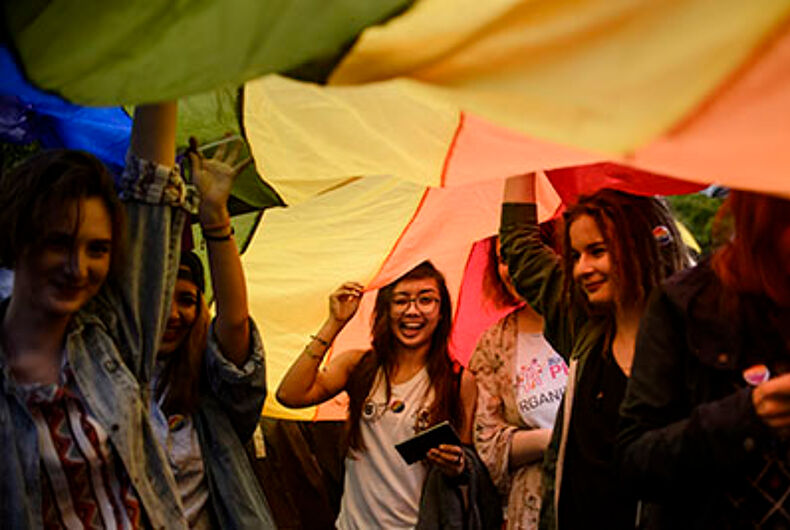 LGBTQ history is, in many cases, hidden history. As LGBT History Month comes around once again, we must continue to talk, advocate and educate.

Most of us weren’t taught about it in school. In fact, much of our collective history has been marginalized, ignored, silenced, and in some cases, destroyed. If we’re lucky, we get an informational sidebar about someone like Harvey Milk.

They’re an add-on, not part of the central narrative. And rarely do they include women, or people of color, or transgender people. Never mind the erasure of LGBTQ people who are part of history and have their identity as part of our communities, from Michelangelo to Bayard Rustin to Eleanor Roosevelt.

That’s why I write books for children about LGBTQ history and culture. It needs to start early and be about the people, for whom their sexual orientation or gender identity is simply part of who they are, who they love.

Within the last four years, I’ve written four picture books that celebrate LGBTQ culture, inform children and adults about aspects of LGBTQ history, and portray our community honestly and unapologetically.

My books are filled with images of people of color, transgender and gender non-conforming people, fat people, pierced and tattooed people, leather queers – all the people who never see themselves reflected in children’s books.

Before I say more about Lynn, let me back up a bit, and provide some context. My latest book, Sewing the Rainbow, is about Gilbert Baker, a textile artist who, after having a conversation with Harvey Milk, developed and popularized a new “gay logo” – the rainbow flag. The first two flags were flown on June 28, 1978 in San Francisco, marking a new era in LGBTQ pride and visibility.

Gilbert’s story is fascinating, and as I researched his life and his legacy, I became increasingly excited to share his story.

To be clear, Gilbert didn’t create the first rainbow flags on his own – and that’s where Lynn’s story comes in.

About thirty of Gilbert’s friends helped make the rainbow flags, even though most of them had never been within 20 feet of a sewing machine. Some of his friends got a crash course in sewing. Others, like Cleve Jones, raised funds to pay for the fabric, dye, and thread.

Lynn Segerblom, a costume designer and free-spirited hippie who at the time was known as “Faerie Argyle Rainbow,” was the resident tie-dye expert. She concocted all of the color formulas.

She provided a crash course in proper dye temperature and fabric agitation; and she supervised the process of transporting the dyed fabric to the closest laundromat, rinsing the fabric in the heavy-duty washing machines, and bringing the fabric back to be ironed and sewn – while praying that whatever dye remained in the washing machines wouldn’t ruin some unsuspecting patron’s underwear.

Without Lynn, there would be no rainbow flag.

This past spring, two children’s books about the rainbow flag have been released. (The other is Pride: The Story of Harvey Milk and the Rainbow Flag, by Rob Sanders and illustrated by Steven Salerno.)

Both books place cisgender gay white men at the center of the rainbow flag narrative. This, I’m sure, hasn’t been lost on Lynn.

“It would be nice to get credit,” she was quoted as saying in an article about her role in birthing the pride flag. Technically, in Sewing the Rainbow, she did get credit; the Reader Note includes a bit of information about Faerie Argyle Rainbow and her role in creating the rainbow flags.

But that brings us back to where we started: Gilbert got a book. Faerie Argyle Rainbow got a “mention.”

And now we’re back to the hidden histories – or barely-visible histories – of women, people of color, and transgender people who have influenced the trajectory of LGBTQ rights.

What’s worse is that I inadvertently contributed to that.

I don’t regret writing Sewing the Rainbow; it’s a beautiful book (it even sparkles!), and it adds one more layer to the story of the LGBTQ rights movement. However, for me, Lynn Segerblom serves as a cautionary tale, and as a wake-up call.

In her TED talk titled “The Danger of a Single Story,” Chimamanda Ngozi Adichie says, “Power is the ability not just to tell the story of another person, but to make it the definitive story of that person.”

Gilbert Baker’s story is not the sole definitive story of the rainbow flag. But too often, we let one story become the story. Think about films like Milk, Stonewall, How to Survive a Plague, or When We Rise. If you’ve seen them, you know about people like Harvey Milk, Larry Kramer, Peter Staley, and Cleve Jones.

But what about Stormé DeLarverie, a mixed-race butch lesbian who was arrested during the Stonewall riots? Or Felicia “Flames” Elizondo, a “screaming queen” who frequented Gene Compton’s Cafeteria, site of the Compton’s Cafeteria riots? Or Pat Navarro and her son Ray, two of the first members of New York’s ACT UP?

Or Sylvia Rivera, or Jose Sarria, or Miss Major, or Ana Marie Simo, or the countless other women, people of color, and transgender people who make up the tapestry of our queer historical experience?

I hope someone writes a children’s book about Lynn. Perhaps I will.

This deaf man got his hearing back. The first thing he heard was his partner proposing.