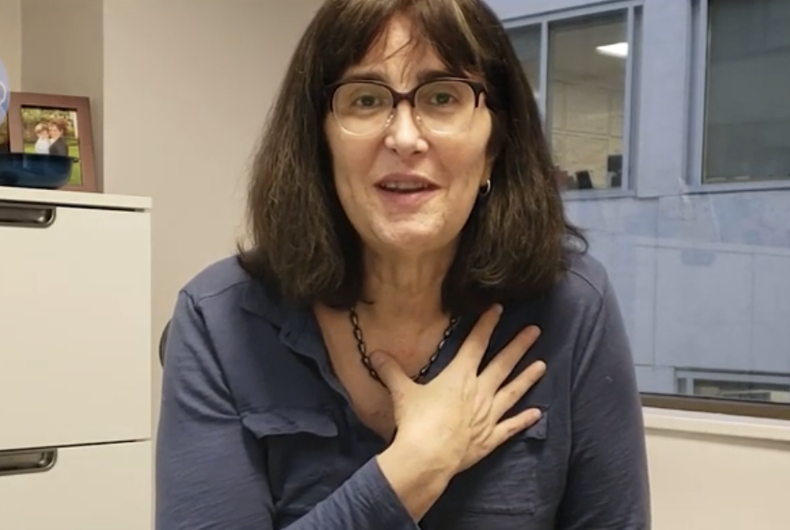 Mara Keisling, speaking in a video for Trans Awareness week in 2018.Photo: Screenshot via YouTube

After a majority of employees exited the National Center of Transgender Equality (NCTE), and we reported that a union filed a labor dispute against them, things looked grim for the longstanding organization and its current leadership, namely founder Mara Keisling. Additionally, accusations from TransGriot‘s Monica Roberts that Keisling had referred to her and activist Dawn Wilson as a racial slur did not help.

Despite this, Keisling is still atop the NCTE – and in an exclusive interview with NewNowNext‘s Kate Sosin (who first reported the news of NCTE staff being bought out of their employment), she makes it known that the organization is still standing.

A letter signed by over 400 prominent transgender leaders – including Andrea Jenkins and Charlotte Clymer -condemned the remaining NCTE leadership for failing to address concerns they “struggled with racism and other forms of oppression,” but Keisling believes that “folks…expressing concerns is good.”

“As that letter says, and as I think most trans people know, NCTE is a really, really important resource that’s done really phenomenal work for 17 years….we think we’ve already uncovered everything that we need to fix that the letter mentions,” Keisling told NewNowNext.

“We now have engaged a DEI firm that’s local to D.C. It’s black-owned, and they’re going to look at everything,” the Executive Director reports.

While she makes clear that she’s not leaving her post, Keisling does admit that she won’t be there in due time. “I’m not going to be here in 10 years. It’s not a promise or anything, but I’m just not. It’s really important to always be growing new leadership in an organization and we do that here.”

“You know, we’ve been very focused in particular on growing people of color leadership,” Keisling claims.

She also recognizes that with the 2020 census, elections, and other important changes happening the trans community, the direction of NCTE – considered the ‘leading social justice advocacy organization’ for trans people – is of major importance. “…I hate to be dramatic, but it’s going to be one of the most important years ever for the trans community,” she admits.

However, despite making pledges of change, Keisling is very apprehensive in the edited interview, taking issue with Sosin’s previous telling of the NCTE’s issues. When Sosin asks Keisling, “can we trust [the NCTE] after most staffers were dissolved in this buyout?” Keisling directs the writer “not to use the word dissolve again,” as their NewNowNext article had also described the employee’s buyout as a dissolution.

When asked to explain the ‘fracture’ at NCTE, Keisling answered to Sosin that “it’s so much more complex than that,” also telling her that “I’m not blaming you on this, but your article made it sound like there were two sides. It wasn’t two sides.” Later, she refuses to provide a full out explanation again, reporting “I don’t know that either you or I are the ones who can figure it out….do you want an easy [answer]? There’s not one.”

Many of the issues at the NCTE stemmed from the alleged poor treatment of people of color there, but also allegedly reached a boiling point when several staffers tried to unionize, and were instead offered a buy out of their employment. Keisling goes on to describe the unionizing conflict that was reported as “so bizarre”, telling Sosin that leadership was going to voluntarily recognize the staffer’s unions, but the organization of one “never happened” and was “not up to management” to see it through.

In response to questions about the accusation that she called Roberts and Wilson “uppity n-words” in 2007, Keisling completely denies that it happened – “Absolutely not, unequivocally no. I have never used that word. If it had been in my head, it has never been in my mouth.”

Even though both women claimed to have independently corroborated the story as told to them by people present at the time, Keisling answers that both women are wrong – “I don’t know what to tell you. It never happened.”

In conclusion, Keisling says that “If it helps people, I hope people hear me say that I know I made mistakes, and if they want to hang the whole hat on that, that’s fine, and we’re going to fix them.”

Dear youth, keep challenging the systems of power – no matter who tells you to ‘chill’.