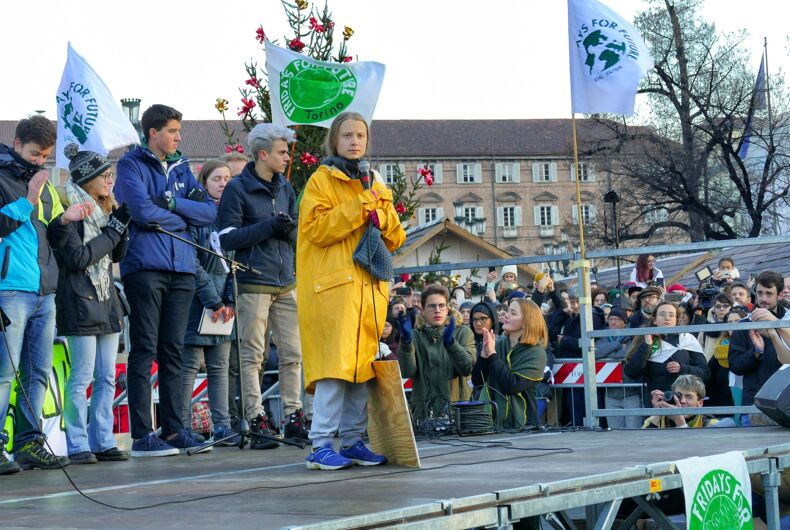 16-year-old activist Greta Thunberg, who has traveled the world spreading the message that our leaders need to combat the deadly climate crisis, was named TIME’s Person of the Year for 2019. Her inspiration and vigilance have sparked a worldwide youth movement to save the Earth and help ensure that the young people of today and future generations can actually have a future.

From the Oval Office, the Backlasher-In-Chief, Donald Trump tweeted about Greta’s Person of the Year recognition: “So ridiculous. Greta must work on her Anger Management problem, then go to a good old fashioned movie with a friend! Chill Greta, Chill!”

Related: Gay people in a homophobic country don’t always see themselves as oppressed

Categorizing Thunberg as having “anger” issues is a common stereotype used to bully women and further oppress them, ironic since supposed anti-bullying First Lady Melania Trump coddled her husband for “communicating differently” in his supposed criticism of Thunberg.

When ideas emerge that challenge entrenched systems of power, oppression, and privilege, and work to end the dehumanizing and oppressive institutions, we see forces that want to maintain the status quo wage battles – figuratively, and literally – to exterminate counterculture. They aim to prevent any gains progressive movements have fought so tirelessly to have, and turn back if possible. Trump’s bizarre need to belittle Thunberg is evident of that.

We see history replete with this intense and often violent backlash from many factions against such movements – slavery, Jim Crow, apartheid, human sex trafficking, genocide and ethnic cleansing among the most prevalent. It took decades, and sometimes century, to progress as far as we have in feminism, workers’ rights, education and health care equality, and human rights and equality of opportunity for people of all socioeconomic classes.

Susan Faludi, in her now-classic exposé, Backlash: The Undeclared War Against American Women, details the intense resistance to feminist ideas and movements for gender equality. By shining an intense light upon this backlash, Faludi debunks the myths and stereotypes perpetuated by social institutions, from business to the media, working to restrain women in all facets of their lives.

Even today, it still takes courage to speak out and counter the stereotypes, the scapegoating, the fear, the ignorance, and yes, the hatred that comes with being outside the majority. Yet, throughout the world – from university campuses to grade schools, from our homes to the media, we see young people fighting and altering the world at earlier ages than ever before. Not only that, but those activists are gaining victories, too – especially in the electoral, judicial and legislative arenas.

“The people in the government who were voted into power are lying to us. And us kids seem to be the only ones who notice and our parents to call BS. Companies trying to make caricatures of the teenagers these days, saying that all we are self-involved and trend-obsessed, and they hush us into submission when our message doesn’t reach the ears of the nation, we are prepared to call BS.”

These words were spoken by Emma Gonzalez, a senior at Marjory Stoneman Douglas High School in Parkland, Florida at a gun control rally in Fort Lauderdale, just four days after a gunman plowed down several people with an AR-15 semi-automatic assault rifle, killing 17 and injuring another 15 precious souls. Through her voice, passion, outrage, and deep commitment, Emma poured hot cleansing waters to the tipping point of a barrel representing a movement that has long been filling in our country to wash away the deeply entrenched stain of gun violence.

Movements of these natures declare that people are worth far more than corporate profits and political payoffs. Gun control is an example of demanding measures be taken to finally begin to end the scourge of violence and oppression in the United States. It is a movement proclaiming clearly and forcefully that condolences and prayers are simply not enough, and most importantly, action is needed.

The United States stands at the cusp of great social change, led by strong and articulate young people who are cutting through the BS of entrenchment holding in place a system catering to the rich and the well-positioned. Black Lives Matter and athletes inspired by NFL star Colin Kaepernick are challenging institutional racism; women are pouring out into the streets and onto ballots to remove people established in the highest ranks of key policymakers; the #MeToo and #TimesUp Movements are demanding an end to sexual harassment and gender inequality.

LGBTQ youth are shaking up traditionally dichotomous notions of gender, sexuality and expression of either. They  continue to push for full equality and the freedom to enter public facilities most closely aligning their gender identities as opposed to their assignment at birth. They are also making links to the various types of oppression, and they are forming coalitions with other marginalized groups

Gonzalez also said in her speech, “[They say] that us kids don’t know what we’re talking about, that we’re too young to understand how the government works. We call BS.”

The youth of todayare declaring their opposition to politics and policies as usual. Just as those at Stonewall and the AIDS activists that came before them, the youth of today are going to make the world a better place. Anything else – they’re calling BS on.

Young people like Thunberg and Gonzalez have been integral in the development and success of social movements from the very beginning, and today, they are challenging norms and traditions as did the young of the past.

They are dreaming their dreams, sharing their ideas and visions, and organizing to ensure a world free from all the deadly forms of oppression, and along their journey, they are inventing new ways of relating and being in the world.