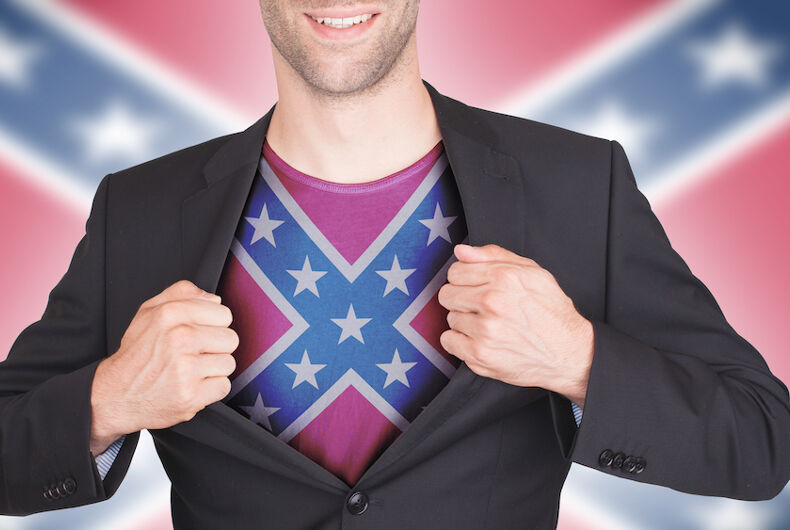 Students at West Plains High School in southern Missouri displayed a Confederate flag in the school’s lunchroom last week in response to LGBTQ students handing out rainbow flags earlier in the day.

Two LGBTQ students told Buzzfeed News that they ordered 60 rainbow flags to show queer students and those with unsupportive parents “that they’re not alone.” The students say they weren’t trying to upset anyone with the flags. Most students simply attached the flags to their backpacks.

Related: Will a Dolly Parton statue replace a Confederate memorial in Tennessee’s capitol?

Later that day, two or three unidentified male students displayed a Confederate flag in the senior cafe area of the lunchroom. One of the students later posted an image on social media showing the flag being displayed and the message, “If they can fly their queer flags, others can fly their rebel flags. Butt hurt?” (Butt hurt is a slang term for being oversensitive.)

Two of the LGBTQ students who had handed out flags earlier in the day witnessed the incident. One said, “To us it was just like retaliation to people who were holding their own [pride] flags. The worst part is that others were backing them up.” One queer student claims some of the male students “used anti-gay slurs against her and her friends in the cafeteria,” Buzzfeed News reports.

Teachers intervened and took the Confederate flag, but it’s unclear if they took any rainbow flags. In a statement, the school said it respected students’ first amendment rights, but found it unacceptable that the confederate and rainbow flags were allegedly “used by some members of the groups to taunt other students.”

“Rather than deal with this a disciplinary matter, we chose to deal with it as a learning experience,” a school spokesperson wrote. “No disciplinary actions were taken. Our hope is to teach our students to respect each other and to respect different viewpoints on a variety of societal issues.”

Weirdly, this is just the most recent example of the Confederate flag being used as the conservative “opposite” of the LGBTQ Pride flag. In 2017, Fox News commentator Star Parker and hate group leader Bryan Fischer said the Pride and Confederate flags “mean the exact same thing” even though the LGBTQ community has never tried to secede from the United States nor fight a war for the right to enslave of an entire race of kidnapped people.

Sheraton refused to host this gay man’s wedding, so Hilton is doing it for free