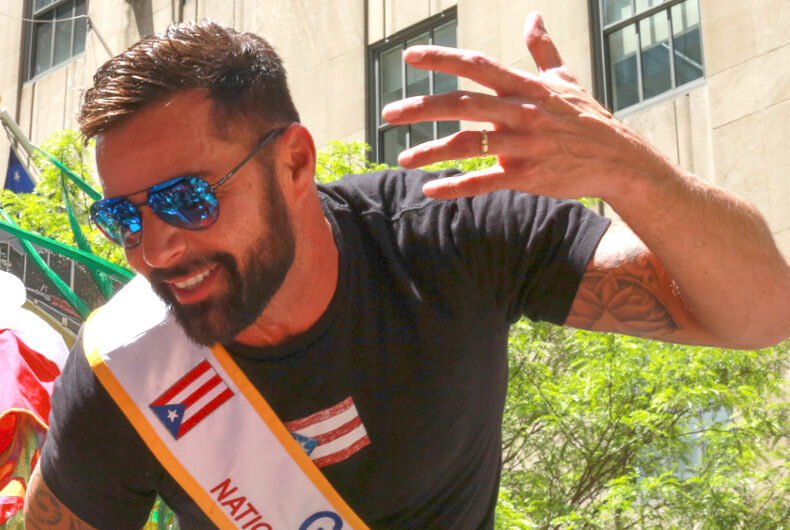 Right now, the Puerto Rican legislature is considering several anti-LGBTQ amendments to the territory’s Civil Code. Puerto Rican-born pop-star Ricky Martin is one of many activists trying to make sure the proposals never become law.

Among the proposals are one to prohibit trans people from changing the gender listed on their birth certificates. Another would “open the door” to religious-based anti-LGBTQ discrimination. And another would limit abortion access.

Related: Ricky Martin just announced he his husband are expecting their fourth child

The Puerto Rico House of Representatives has approved the amendments and the Senate could vote on the measures as early as Wednesday morning, reports The Washington Blade.

In a Spanish language tweet, Martin opposed the proposals, writing, “We have to be attentive to the movements in the Senate to amend the Civil Code. Legislators are obsessed with provoking a setback in the struggle for equality led by the LGBTQ community.”

In addition to Martin’s tweet, 48 national organizations signed a public letter calling for the Senate to postpone its vote and hold a public hearing on how the proposed amendments will affect all Puerto Ricans.

Puerto Rican Governor Wanda Vázquez told El Nuevo Dia, “We are going to listen to everyone, we are going to evaluate these claims. We are going to see the final bill and at the end of the day we will… ensure that nobody’s rights are violated as a matter of law.”

Martin has become a vocal advocate for the Puerto Rican LGBTQ community. He helped shut down a discriminatory “religious freedom” bill in June 2019 and protested the then-governor’s homophobic tweets in July 2019.

He also helped raise money following the 2017 hurricane which devastated the island nation.

Update: The senate vote on the reforms has been postponed until January.

***CORRECTION: We mistakenly referred to Puerto Rico as a country in this story’s initial form, and we have corrected that. Puerto Rico remains a United States territory.