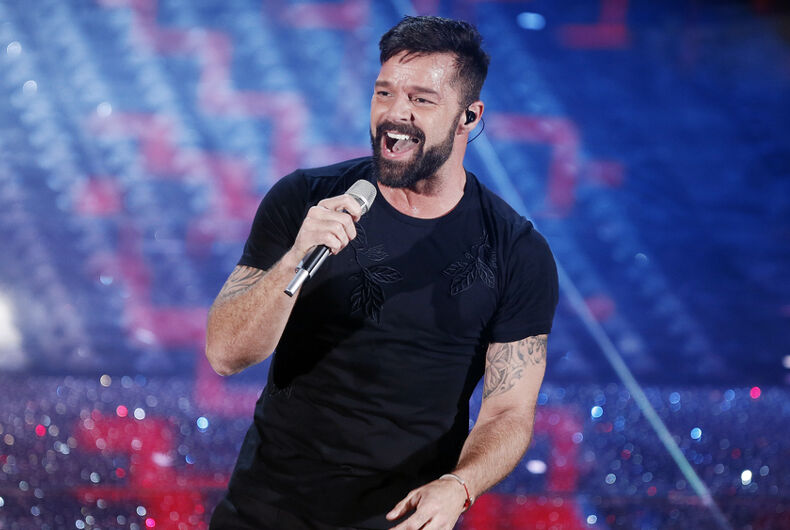 According to Out, the singer said:

“My family is here. Jwan I don’t see you but my husband Jwan, I love you. My beautiful twins Matteo and Valentino, I love you with all my heart, you’re my strength.

“You inspire me everyday, you motivate me to keep doing what I’m doing and you guys are amazing. I love you. My baby girl who is not here with us she’s at home with grandma, but she’s also the love of my heart. And by the way — I have to announce that we are pregnant. We are awaiting.”

Here is video of Martin’s announcement:

At #HRCNationalDinner, @Ricky_Martin announces that he and husband
Jwan Yosef are expecting a new addition to their family.
Congratulations, Ricky and Jwan! #BabyOnBoard! 👶 pic.twitter.com/ngpqk0Rdhg

Just last January, Martin and Yosef announced the birth of their third child, their daughter Lucia. The couple also has two older twin sons, Valentino and Matteo. Both are about 10 years old.

In the past, Martin said that he wished his sons could be gay. While he said he felt his sons were too young to declare their sexual orientations just yet, he said he wanted his boys to experience the same strength and outlook he discovered upon coming out.

“My kids are too young,” he said, “but I wish they were gay. It is a very special thing. The sensitivity, the way I see now, that I don’t have to hide in any way shape or form. I see colors. And then you see the rainbow. I understand why the symbol is the rainbow. It’s just real. Everything is tangible. It makes me a stronger person.”