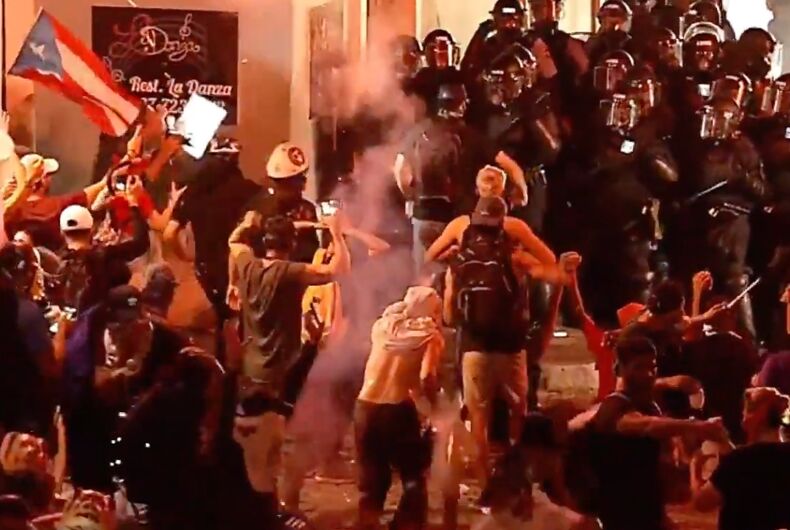 Out pop singer Ricky Martin will join protesters in Puerto Rico demanding the resignation of the island’s governor, Ricardo Rosselló. Leaked messages from a chat room administered by the Governor show Rosselló and other high ranking politicians using repeated antigay slurs, making sexist and derogatory comments about women, and wishing for the assassination of political opponents.

After days of protests demanding Rosselló’s resignation or impeachment, the pop singer has announced he will join the protests this evening and is calling on his fans and supporters to join him. In a Spanish language tweet sent Wednesday morning, he called on Rosselló to resign.

Related: Puerto Rico was about to pass a ‘religious freedom’ law but Ricky Martin stepped in & shut it down

“Do an act of true generosity, worth and love for Puerto Rico and give your position to another person with the wisdom and leadership to direct your destiny as a people,” Martin tweeted.

The protests have rocked the island commonwealth with police firing water cannons and tear gas into the crowd outside the capital and presidential mansion. Royal Caribbean cruise line canceled port calls in San Juan temporarily, citing the protests.

“In light of current unrest in San Juan, Puerto Rico, we have canceled today’s call to San Juan,” Owen Torres, spokesman for Royal Caribbean, said in a statement to USA Today. “We continue to monitor the situation closely and will make adjustments as necessary to ensure the safety and security of our guests and crew.”

Many of the leaked messages targeted Puerto Rico senator Eduardo Bhatia. A publicist posted a picture of Bhatia and another person responded with “20 years and 200 pounds ago.”

In a separate discussion, Rosselló posted a video of Bhatia and wrote “historic cocksucker levels.” He used the same word to refer to journalist Benjamín Torres Gotay as an “unprecedented cocksucker” after Torres Gotay tweeted about ferry problems on the island.

Apple unveils new queer emojis, but there still won’t be a trans flag