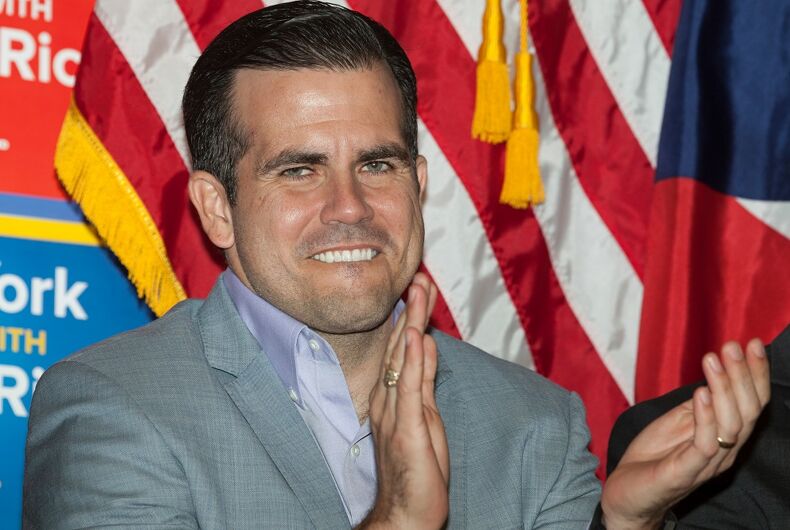 Protestors demonstrated this weekend to get the governor of Puerto Rico to resign as his role in a homophobic and sexist online conversation became public.

Last week, Puerto Rico’s Center for Investigative Journalism leaked over 800 pages of messages full of profanity and hateful language from a group chat that was administered by Governor Ricardo Rosselló.

Many of the messages targeted Puerto Rico senator Eduardo Bhatia. A publicist posted a picture of Bhatia and another person responded with “20 years and 200 pounds ago.”

In a separate discussion, Rosselló posted a video of Bhatia and wrote “historic cocksucker levels.” He used the same word to refer to journalist Benjamín Torres Gotay as an “unprecedented cocksucker” after Torres Gotay tweeted about ferry problems on the island.

Another publicist posted a picture of a woman with a T-shirt that said, “Antipatriarchy, Feminist, Lesbian, Trans, Caribbean, Latin American.”

“That must be some type of record, isn’t it?” Rosselló responded.

In another message, Sobrino wrote, “I’m dying to shoot her up,” referring to San Juan Mayor Carmen Yulín Cruz.

Sobrino resigned this past Saturday, as well as secretary of state Luis G. Rivera Marín, for their part in the leaked messages.

Rosselló, though, said that he will not be resigning over the messages.

“I’m the governor of Puerto Rico, but I’m a human being who has his faults,” he said at a press conference. “I ask for forgiveness.”

“None of this justifies the words I’ve written. My apologies to all the people I have offended.”

“This was a private chat.”

News about the leaked chats comes as two of the Rosselló administration’s senior officials were arrested by the FBI for misappropriating over $15 million of federal funding.

“For Puerto Ricans, this has been basically our Watergate,” said Caribbean scholar Yarimar Bonilla.

Fireworks were launched this weekend in front of the governor’s mansion as protestors called on him to resign.

“No more lies. We call a meeting. Resign. Huge salaries + greed = corruption,” one of the signs read.

“I think they did a lot of illegal things during these conversations,” said Carla Minet, who the Center for Investigative Journalism.

“They were part of a conspiracy to persecute people because of political beliefs. I think definitely they used public funds to do political work. That is unbelievable.”

Gay CBS journalist David Begnaud was targeted with insults in the messages as well after he reported on crime on the island.

Begnaud said that there are more messages being released soon.

Rosselló is up for reelection in November, 2020.

He killed a man & shot another ‘because they were gay.’ He won’t be charged with a hate crime.