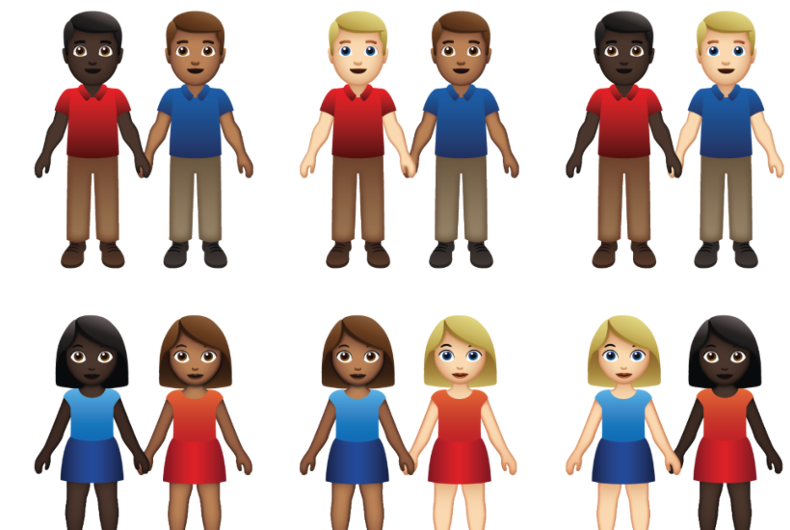 For World Emoji Day, Apple has released a preview of their next batch of emoji and this time it includes a number of queer-friendly additions to the available emojis.

Revealed today are all the possible combinations for a pair of human figures holding hands, which will be sporting 16 different skin tone variations for either or both figures in the couple. Couples will also gain a gender-neutral option for the couples. Apple already supports same-sex couples with these and other emoji.

All told, it will make for 75 different possible combinations of couples, displaying different genders and races together.

World Emoji Day is on July 17 due to the date shown on the standard calendar emoji on iPhones, and was started by the founder of Emojipedia, Jeremy Burge. Apple has used the day since 2017 to announce new additions to the range of emoji available via iOS.

Related: A church is getting sweet revenge against vandals who defaced their pride flags

It is expected that the emoji Apple presented today, which have already been approved by the Unicode consortium earlier this year, will come to devices in the autumn.

Also added is a series of new emoji to better present disabled people. This includes wheelchair users in two varieties, guide and support dogs, bionic prothesis, people with white canes, a figure displaying the ASL gesture for “deaf,” and a hearing aid.

The 13 new disability-related emoji are seen by Apple as an, “an initial starting point” according to their proposal, which was approved in March.

As well as these two big additions, Apple unveiled several other emoji they’re adding, including safety vests, waffles, and skunks.

One emoji remains off the table as of yet, however: the transgender flag. This remains a “draft candidate” for the next Unicode release, and won’t arrive until at least 2020. It was not approved previously, being passed up for a lobster and other emoji.

👉 Currently listed under the name "Blue, Pink, and White Flag", the Transgender Flag / Transgender Pride Flag is a draft candidate for the next Unicode emoji release (Emoji 13.0). If approved, this flag will come to most platforms in 2020 🏳️‍⚧️ https://t.co/DT0nXZx6HM pic.twitter.com/58sdCQ25jk

Many services, such as Twitter, WhatsApp, and Facebook, do support the transgender flag emoji, but require users to combine the white flag and the transgender symbol emoji to display it.