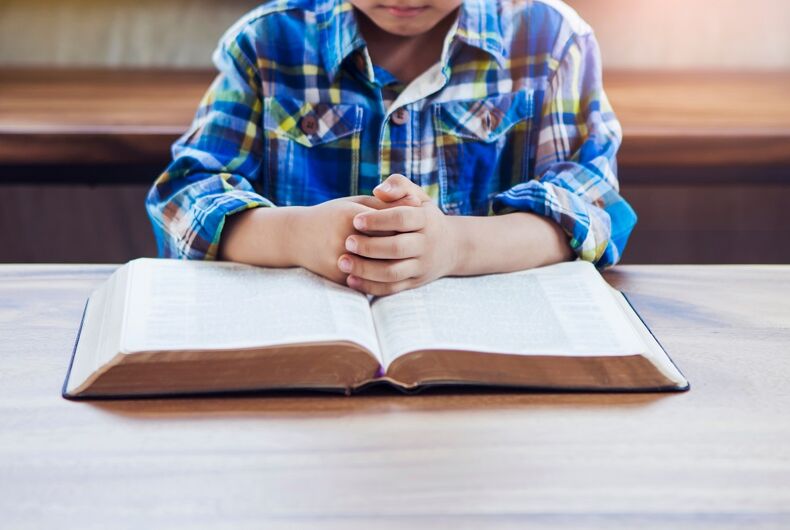 A Christian school in Maryland has sued the state, claiming it is entitled to government money even though it bans LGBTQ students, faculty, and staff.

The Bethel Christian Academy in Savage, Maryland, is a Christian school that says it provides “an authentic Christian learning community to train students to know, love, and serve the Lord Jesus Christ.”

The school’s handbook says that marriage is only between a man or a woman and that all students must present in a way that conforms to their sex assigned at birth.

The school says in its federal lawsuit say that their policy to exclude LGBTQ people is based on their religious beliefs and that denying them funding is “religious hostility.”

“The Supreme Court has been very clear that there is no place in our society for religious hostility,” said Christiana Holcomb of the Alliance Defending Freedom, a hate group that is representing the school in court. “That is the crux of the issue of this case.”

Maryland has a program where the state provides scholarships for low-income students to attend private schools called Broadening Options and Opportunities for Students, or BOOST. The law that created BOOST bans discriminatory schools.

Last year, BOOST’s board studied the student handbooks of schools participating in the program to see if they had discriminatory policies. Ten schools had policies that disqualified them, and they were told to refund the voucher money they had received. Six of those schools revised their policies and were approved.

“A non-heterosexual student may reasonably view the policy as one that allows denial of admission or discipline or expulsion on the basis of his or her sexual orientation,” Matthew Gallagher, chair of BOOST’s board, wrote in a document in 2018. “Therefore, the Board concluded that this policy, on its face, was in conflict with the nondiscrimination clause contained in the… law.”

While the school’s policy clearly discriminates against LGBTQ people – would they allow a teacher married to someone of the same sex to work there? – Bethel contends that it applies its policies equally.

The state “cannot point to any evidence of discrimination,” Holcomb said, adding that all students are banned from showing any affection, even holding hands, in school.

The school’s principal Claire Dant said that she doesn’t know of any LGBTQ kids in the school, which is kindergarten through 8th grade.

“None that have been so visible that it has been an issue or that we were aware of them,” she said.

That is, she is saying that the policy is effective at discriminating against LGBTQ students, who know either to not attend the school or to remain hidden while they’re there.

The ACLU of Maryland said that the lawsuit is about a larger attempt to dismantle anti-discrimination laws by arguing that religion is a legal excuse to discriminate.

“I think it is part of a larger attempt by the religious right in this country to create a license to discriminate on the basis of religion,” ACLU attorney David Rocah said.

The lawsuit “threatens to undermine the entire fabric of anti-discrimination law in this country with profound consequences.”

A 2017 HuffPost analysis found that 14% of the schools across the country that participate in school voucher programs have explicit anti-LGBTQ policies.

Maryland is one of the exceptions because the law that created BOOST bans discrimination, and BOOST might be threatened if Bethel’s lawsuit is successful.

“If they were to win and it opened up the door to discrimination, I think you would find a strong movement in the legislature to end BOOST,” said Maryland Delegate Maggie McIntosh (D). “We are just not going to use tax dollars to discriminate against anyone.”

Should LGBTQ people be worried about using FaceApp?