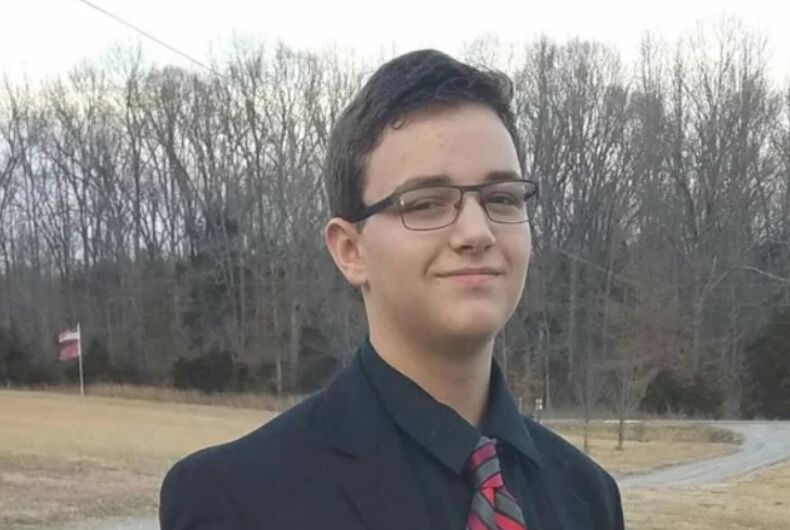 A prosecutor who is under investigation by the state after he was caught making anti-gay comments on video said that no charges will be sought in the case of a teen who died by suicide after being outed by his classmates.

This past September, Channing Smith, a 16-year-old student at Coffee County Central High School in Manchester, Tennessee, died after a classmate posted on Snapchat some “graphic texts” that Smith had sent another boy, effectively outing Smith as gay or bi.

Related: This cop was fired after he mocked a gay teen who died by suicide. Now he’s been hired again.

According to his brother, Smith was “freaking out” when he saw the messages. On Instagram that evening, he wrote: “I’m gonna get off social media for a while. I really hate how I can’t trust anyone because those I did were so fake. BYE.”

Now Coffee County District Attorney Craig Northcott says that no charges will be pressed against anyone in connection with Smith’s death.

Earlier this year, video surfaced of Northcott telling the Theological Seminary Bible Conference in March 2018 that he refuses to prosecute cases of domestic violence involving same-sex couples because “there’s no marriage to protect.”

He brought it up as an example of why Christians need to “elect a good Christian man” to offices like his own, so that they can make anti-LGBTQ judgment calls.

He is currently under investigation by the state supreme court for his comments.

Northcott has not commented on why there would be no charges in the case. Former prosecutor Alex Little, who was not involved in the decision not to seek charges, said that it’s hard to get a conviction when it comes to bullying perpetrated by minors.

“There are certainly harassment charges can be brought but those are generally misdemeanors, especially when you have juveniles involved,” Little told Fox 17. “It’s very hard to charge a juvenile with misdemeanor harassment of another.”

Earlier this week, members of Smith’s family met with Melania Trump as part of the #BeBest campaign against cyberbullying.

Highlighting online safety is one of my #BeBest priorities. Yesterday, @billyraycyrus introduced me to the Smith family to hear about the tragic loss of their loved one from cyberbullying. Teaching positive online behaviors can ensure a safer future for our children. pic.twitter.com/3p4HfdRtTX

Netflix is giving Kevin Hart a show. It’ll be about his problems with LGBTQ people.