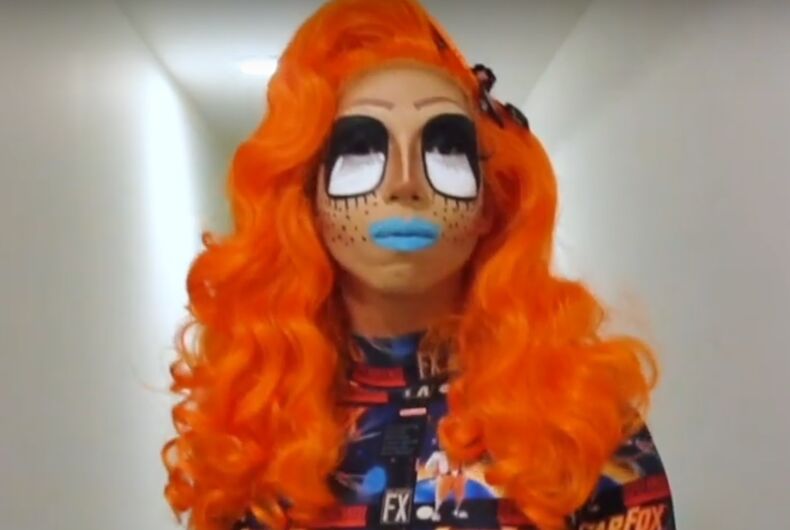 A drag performer named Erika Klash says a manager and security guard at an Austin, Texas Whataburger fast food restaurant refused to let her enter because they considered her drag “a security risk.”

If you’ve ever seen Klash — she was a contestant in Season 2 of the gross-out and horror-themed drag competition Dragula — then you might understand how her drag appearance might alarm some inexperienced people. She regularly combines a cutesy anime-cosplay aesthetic with darkly monstrous overtones that are truly surprising.

Klash wrote on Twitter, “Manager didn’t want me to enter and security blocked me from entering without citing any company policy. I am a professional artist, NOT A security threat.”

In an open letter posted on Twitter, Klash wrote that after security forbade her from entering the restaurant by standing in front of the door, even as her vehicle pulled away, Krash was informed the restaurant has a “no mask” policy. But while she understood the reasoning behind such a policy, she was only wearing full face makeup (i.e. not a literal mask) and wasn’t wearing a costume.

She claims she didn’t have any personal belongings on her that might have concealed any possible weapons, nor was she under the influence of drugs or alcohol. She says she was calm and civil throughout the entire incident.

Klash said, “A little bit of sensitivity and clear communication on the part of the Whataburger staff would have gone a long way.”

(1 of 2) My (hopefully) final public statement about the incident at Whataburger this past Saturday: pic.twitter.com/auMF81BWyV

(2 of 2) My (hopefully) final public statement about the incident at Whataburger this past Saturday: pic.twitter.com/V2OgMc58Qc

Klash says she shared the story not for attention but because she “wanted the world to know that there is dignity in what we do as drag artists.” She has since added that representatives from Whataburger contacted her and said they will provide a series of trainings to help staff better asses security risks.

The restaurant’s changes, Krash said, “will be clearly reflected in how drag artists and other queer people will be treated at their restaurants going forward.”

All the same, Klash added, “Let’s practice being our own advocates and hold the company accountable.”