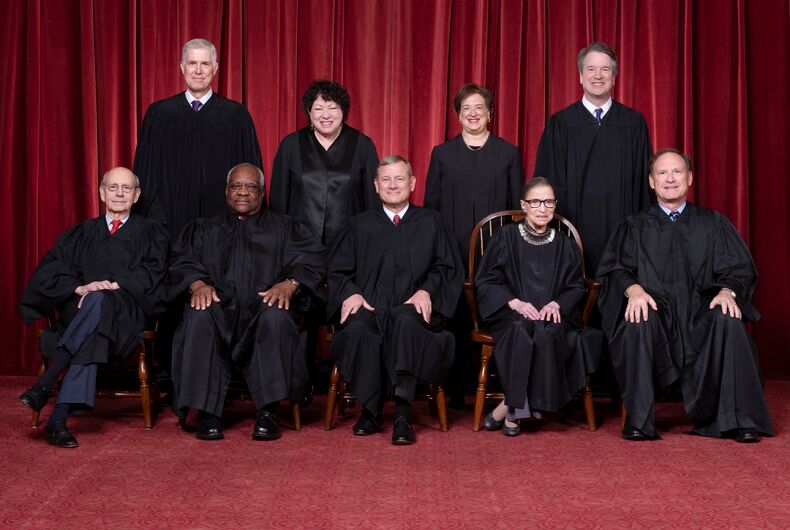 The Supreme Court ruled that discriminating based on gender stereotypes – like firing a woman because she’s too masculine – is an illegal form of sex-discrimination in the 1989 Price Waterhouse case, where a woman who was denied a promotion because she didn’t wear enough make-up and jewelry won her discrimination claim.

The case has LGBTQ advocates arguing that both the plain text of the law and case law around gender stereotype discrimination back them up, while conservatives are telling the court to ignore the text of the Civil Rights Act and to focus instead on what lawmakers intended when they passed it.

Jeffrey Harris represented the employers and argued that they have a right to ban gay men from working for them because “sex” and “sexual orientation” were understood as separate things back when the Civil Rights Act was passed.

Justice Samuel Alito – who was appointed to the Supreme Court by George W. Bush – told Karlan, “You’re trying to change the meaning of what Congress understood sex to be.”

Her argument doesn’t depend on changing the definition of “sex,” but instead on applying the term fairly instead of trying to carve LGB people out of its application.

Karlan responded that the law’s “commitment to providing workers with equal employment opportunities without regard to their sex requires protecting people against discrimination for being lesbian, gay or bisexual.”

After Zarda and Bostock’s cases were argued, the Court heard arguments in Aimee Stephens’s. She was fired from the funeral home where she worked and at trial her former employer said he fired her because she “was no longer going to represent [herself] as a man.”

The trial court found that it was a cut-and-dry case of gender stereotype discrimination because her former boss “contravened Title VII’s core premise: that employees should be judged on their merit, not their sex,” the court wrote.

Justice Sonia Sotomayor asked the lawyer for the Trump administration – which is on the anti-LGBTQ side – at “what point” should the courts continue to allow discrimination.

The lawyer said that it was up to Congress, echoing an earlier statement from Justice Neil Gorsuch who said that such a “massive social upheaval” should probably go through Congress. Gorsuch could be the swing vote in both cases and sharply questioned both sides.

“It was quite a day. After hearing the Supreme Court justices’ questions today, we are hopeful and there are many reasons to be optimistic,” said Lambda Legal’s Gregory Nevins.

“If the Court simply applies the law as written, LGBTQ workers win. The text of Title VII is as clear as day: if an employer refuses to hire, dismisses, or mistreats an employee ‘because of’ that employee’s sex, they are in violation of the law. In these three cases, and in so many others, LGBTQ employees have been punished simply for not conforming to the employers’ sex-based stereotypes about how they should behave or who they should be attracted to.”

“The Court has the opportunity to set the record straight and it’s time.”

Which isn’t a promising situation when the other five justices are conservative ideologues, at least one of whom believes that the idea of not firing LGBTQ people for their identities is a “massive social upheaval.”

The evolving activism of Damián Cabrera-Candelaria, a dedicated son of Puerto Rico

In 1976, the Supreme Court slapped down a sodomy law challenge with just four words