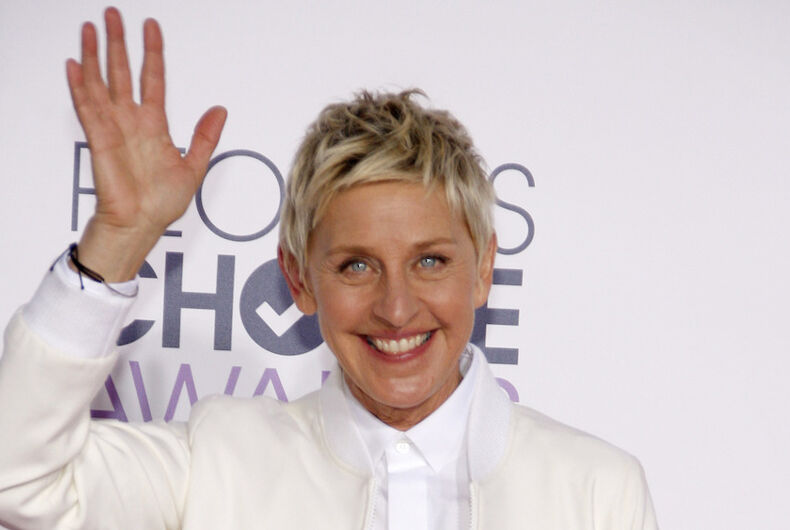 Ellen Degeneres has offered an explanation for why she was hanging out with George W. Bush, who as president opposed marriage equality, legal protections for LGBTQ workers, and appointed right-wing judges whose judicial philosophy is generally antithetical to legal equality.

The two sat next to each other in the VIP suite at a Dallas Cowboys game this weekend.

In a video posted today (below), DeGeneres said:

When we were invited, I was aware that we were going to be surrounded by many other people from different views and beliefs.

During the game they showed a shot of George and me laughing together and so people were upset. They thought, ‘Why is a gay Hollywood liberal sitting next to a conservative Republican president?’ But a lot of people were mad.

Here’s the thing. I’m friends with George Bush. In fact, I’m friends with a lot of people who don’t share the same beliefs that I have. We’re all different and I think that we’ve forgotten that that’s okay that we’re all different.… Just because I don’t agree with someone on everything doesn’t mean that I’m not going to be friends with them. When I say, ‘Be kind to one another,’ I don’t mean only the people who think the same way that you do. I mean be kind to everyone. Doesn’t matter.

Yes, that was me at the Cowboys game with George W. Bush over the weekend. Here’s the whole story. pic.twitter.com/AYiwY5gTIS

In her monologue, DeGeneres compared Bush’ political views to people wearing animal fur. Later, she shared an approving tweet that read, “Ellen and George Bush together makes me have faith in America again,” to which she and her audience gave herself some applause.

While many Twitter commenters praised her acceptance of someone with different politics, others weren’t so accepting.

Journalist Benjamin Norton replied, “‘I’m friends with George Bush,’ boasts Ellen, saying it’s good to have friends with different views But this isn’t a matter of views; it’s a matter of *crimes*. Bush is a war criminal with the blood of 1 million Iraqis on his hands. He should be in prison.”

But this isn't a matter of views; it's a matter of *crimes*. Bush is a war criminal with the blood of 1 million Iraqis on his hands. He should be in prisonhttps://t.co/IJvbvuhQQ0

Another commenter pointed out that many people continue to love the Obamas despite their publish embrace of Bush.

To be fair, we don’t hold Obama’s accountable either. pic.twitter.com/67kEvLI87L

DeGeneres’ being chummy with Bush shouldn’t surprise anyone who’s familiar with her daytime talk show. She had him on as a guest in March of 2017. During his visit he discussed his book of paintings, the importance of a free press, and freedom of religion.

But, as we wrote earlier, Bush’s legacy is still wreaking havoc on America, including on LGBTQ equality. Today, the Supreme Court will hear several cases to decide if there are legal protections at the federal level for LGBTQ workers, and Bush’s two appointees to the high court – Samuel Alito and John Roberts – could be the deciding votes against equality.

Or, of course, they could come down on our side.