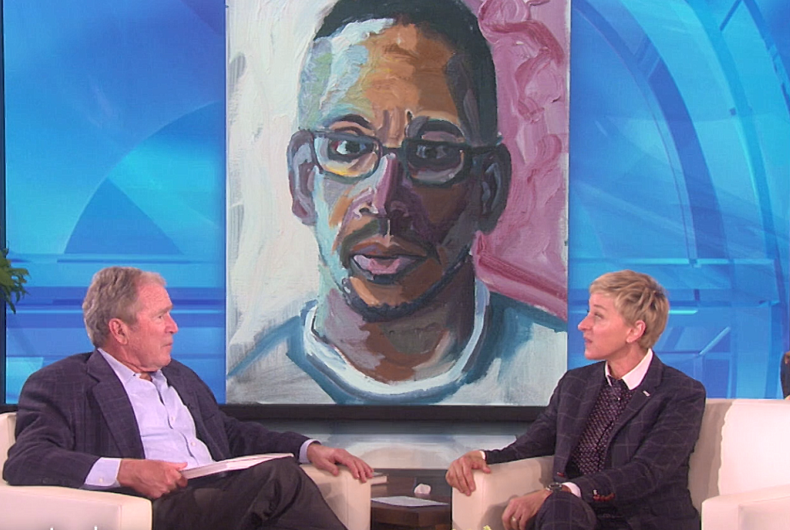 Former president George W. Bush appeared on The Ellen Degeneres Show to promote his book of paintings. Ellen and Bush talked about Putin, Bush’s new career as an artist, and the inauguration of Donald Trump.

They started by talking politics. Bush said that he refuses to criticize his successors, eliciting applause from the audience.

But Ellen pressed Bush on Trump banning some media outlets from the White House press corps. Bush responded that a “free and independent press” is a necessary check on the corrupting influence of power.

He then described his relationship with the press as “symbiotic,” which he warned Ellen was a “big word.” His memory of the Bush era is similar to mine, because he says that he needed the press to get his message out, and the press was generally willing to play stenographer for the Bush Administration. Bush said that “tyrants” ban the free press.

Even though he didn’t link this comment to trump, Bush stressed the importance of freedom of religion, saying, “You can worship or not worship and you’re equally American. It doesn’t matter how you worship.”

Bush’s definition of freedom of religion – that people can choose to follow the religion they want or no religion at all and still have access to the same rights as anyone else – is a stark contrast to Trump’s insistence on “religious freedom,” which only refers to conservative Christians being given a license to discriminate against others, especially when it comes to LGBTQ and women’s rights.

Ellen asked Bush about his relationship with Vladimir Putin, and Bush related a story where Putin insulted Bush’s terrier, saying that it wasn’t as strong as Putin’s hound. He said that a president (he didn’t name any names, but…) has to stand up to Putin or they’ll end up getting pushed over by the Russian autocrat.

In the next segment, Bush talked about his friendship with Michelle Obama and his trouble putting on a poncho at the inauguration of Donald Trump.

Last, they talked about his book of paintings of veterans called Portraits of Courage. He told Ellen that he has only been painting for five years, and she said she loved his work.