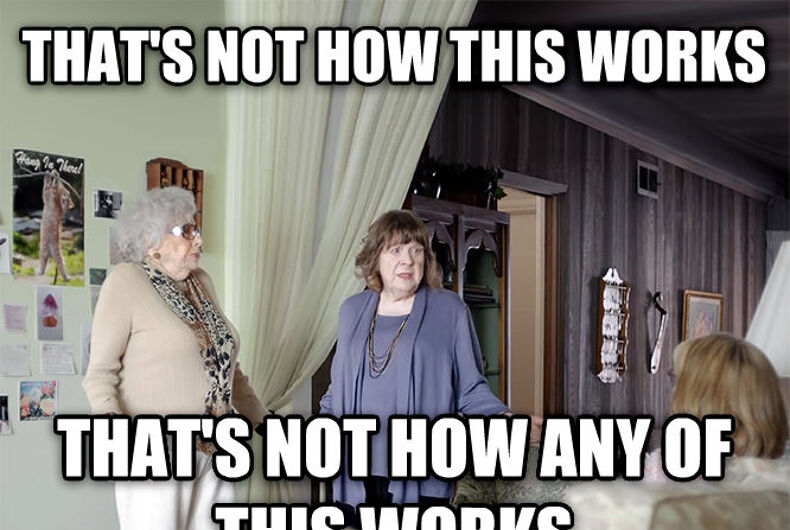 That's not how any of this works!

It really is that simple.

Donald Trump campaigned on a “total and complete shutdown of Muslims entering the United States.” He called for this repeatedly. He won the election because a lot of Republicans want to keep Islam out of the US.

If it wasn’t enough for Trump to advocate a ban on immigrants who practice Islam, he’s working to make it a reality. His recent executive order is a first step to that end. Republicans aren’t even hiding it. Rudy Giuliani told Fox News, “When he first announced it, he said ‘Muslim ban.’ He called me up. He said, ‘Put a commission together. Show me the right way to do it legally.'” And this is the result.

Someone who cares about freedom of religion does not advocate discriminating against those who practice one religion. That’s the opposite of religious freedom.

Look at the issues they hold up as examples of religious freedom being violated. The Hobby Lobby case was about an employer that didn’t want its employees to be able to get contraception in the health care those employees earned and that the government subsidized. The Little Sisters case went one step further and argued that even filling out a form saying that an employer doesn’t want to include contraception in health care their employees earn is too big of a burden.

No one is forcing employers to use contraception, and these employers are specifically saying that they want to be able to prevent others from using it because of their religious beliefs.

The right wants adoption agencies to be able to discriminate against single parents and same-sex couples when placing children. No one is forcing those adoption agency workers to be gay or single, they just want to be able to discriminate against parents who don’t follow the agency’s religion’s tenets, no matter the religious practices of those parents.

They say federal contractors’ religious rights are being violated by making them treat LGBT employees as they do other employees, by providing marriage benefits for same-sex couples and for allowing transgender employees to use an appropriate bathroom. No one is forcing the contractors to marry someone of the same sex or to use any bathroom, but the contractor’s “religious freedom” is being violated because they can’t discriminate against LGBT employees.

The right’s definition of freedom of religion is “Conservative Christians’ ability to impose their political beliefs on others, especially when it comes to how other people have sex.” That’s not what religious freedom is.

Religious freedom cannot be unfettered because people have different religions and we have to get along. At some point there will be conflict between various freedoms, freedom of religion included, and we have ways of dealing with that.

In the US, people get a lot of freedom to practice their religion in the private sphere, and then we evaluate the burdens placed on them in the public sphere to see if those burdens are outweighed by other goals.

This is why encouraging Muslims convert to Christianity before studying, working, vacationing, visiting, or living in the US is so repulsive; the government should not be telling anyone how to pray, believe, or identify themselves.

Religious freedom is important, real religious freedom. We have centuries of history to look at what happens when we allow governments to spread one religion and squelch others.

That’s what makes it a good marketing tool, but you’re a sucker if you actually believe it.