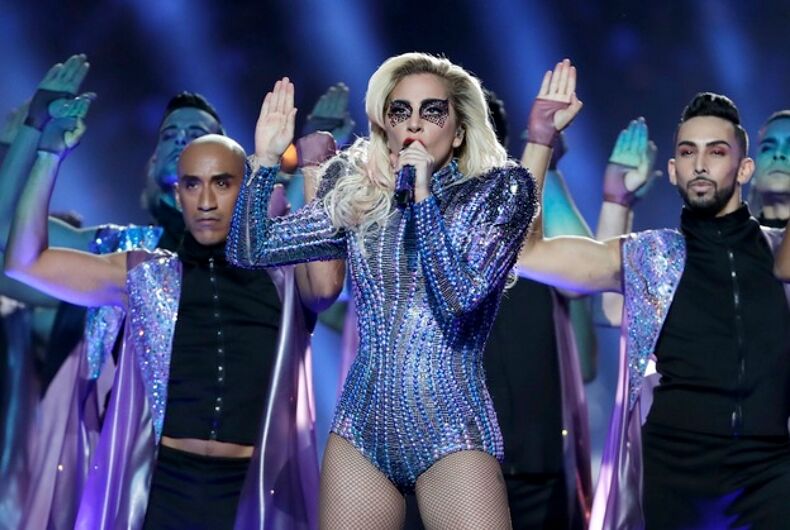 Don’t look now, but Lady Gaga turned us all into satanists during her halftime show at Super Bowl 51.

Fake news purveyor and Donald Trump supporter Alex Jones took to his website, InfoWars, and Facebook to warn the country ahead of the big game that Lady Gaga would unleash her black magic powers on the unwitting public during her performance.

Jones claimed Gaga was involved in the bogus Pizzagate conspiracy, as well as claiming she wore a Nazi uniform at a Hillary Clinton rally. In fact, she was wearing one of Michael Jackson’s jackets, which he wore to the White House in 1990 and which she purchased from an auction of his belongings in 2012.

But hey, why let facts get in the way of a good lie? After all, if Jones were forced to tell the truth, he wouldn’t have a career.

“But now we hear about Lady Gaga, who was admittedly part of the Pizzagate situation, with the spirit cooking lady, the Aleister Crowley event; she admits she has someone sleep with her in her room at night because she believes a demon is going to attack her,” Jones claims. “Whether you believe in demons or not, when she wears meat suits and does all these rituals, and Madonna does it too, the organizers of the Super Bowl are deciding to defile America and break our will by having us bow down to this.”

“And she’s reportedly going to be on top…of the stadium, ruling everyone, with drones everywhere, surveilling them in a big swarm, to just condition them that, I am the goddess of Satan, ruling over you with the rise of the robots in a ritual of lesser magic.”

He goes on to say that she intends to “flaunt it, rub it in, dominate you, and say, I am the dark one, I am the beast, I am the whore of Babylon that the beast rides on.”

He then calls for people to boycott both Lady Gaga and the Super Bowl.

“Realize, these are sick, chicken-necked, filthy little people, that have it out for us and our families, and that the whole New World Order system they’re building is collapsing as it’s constructed. And developments like Trump, that have all these howling dirtbags so upset, is just the beginning of their fall and their collapse.”

Jones also calls George H.W. Bush the “New World Order architect” and that his inclusion in the events, by tossing the coin at the start of the game, is further proof of his conspiracy theory.

He then pervs out on a nearby dome, calling it “a big, pink, granite milky popped up right there for ya.”

Watch his unhinged ramblings in the video below.

Jones made another video shortly before the game to declare that the New World Order Globalists were the real winners of the Super Bowl about to be played.

He calls televised sports “an example of mind control,” and adds that “men now aren’t politically involved” because they are more interested in what he calls “simulated equations” and “a primitive form of virtual reality” than “real war.”

Watch that video below.

Jones also recently said he is ready to die for President Trump.

In other Lady Gaga news, it was announced on Tuesday that she would appear on the “RuPaul’s Drag Race” Season 9 premiere this spring.

Reality check: Donald Trump does not care about your ‘religious freedom’

If Melissa McCarthy’s Spicer skit bugged Trump, what would Rosie as Bannon do?