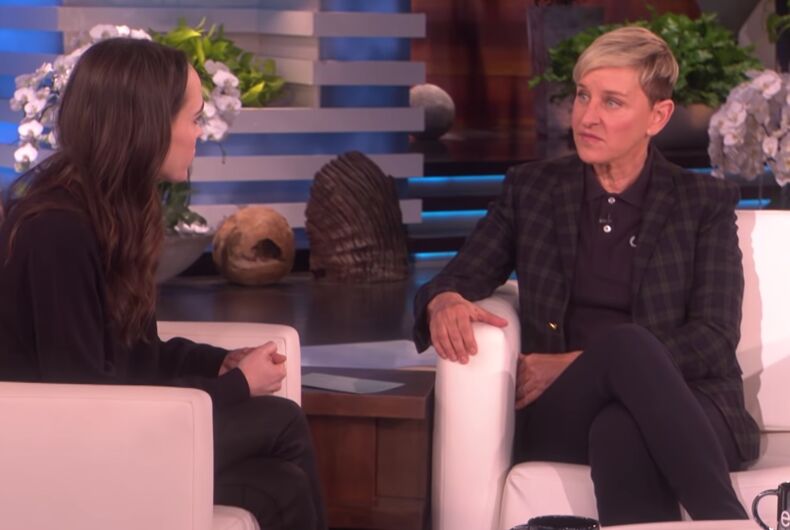 Actress Ellen Page appeared on Ellen DeGeneres’s show. This past month, DeGeneres has been criticized for being too forgiving of homophobia.

First, she forgave actor Kevin Hart for his violently homophobic tweets and insisted that he host the Oscars even though he still appeared to think that any criticism of his homophobic statements was nothing more than an attack on him personally.

Then, DeGeneres tweeted supportive messages about actor Chris Pratt just days after Page called him out for attending an anti-LGBTQ church.

Degeneres had Page on her show today, and she opened the interview by asking her about her calling out Mike Pence’s homophobia on Stephen Colbert’s show.

“People need to know that when you grow up in a society that makes you feel like there’s something wrong with you, that something needs to be fixed, it’s extremely dangerous and harmful.”

Page’s gravity contrasted Degeneres’s usual light-hearted tone, and she tried to match Page by bringing up homophobia in other countries and how sometimes it’s hard to focus on the news with all the issues out there….

Page brought the conversation back to speaking out against homophobia. “You know what it’s like, Ellen,” she said.

“You know what it’s like to grow up and internalize homophobia and live with that shame and how much that poisons you.”

Former NFL player Michael Sam regrets coming out when he did